So you’re convinced to put your parts on a diet. Or maybe you’re starting from a blank sheet and want to design with lightweighting strategies from the start. The following are five approaches to lightweighting. This is not an exhaustive list or an instruction manual by any means, but some themes to get you started.

First, let’s clarify our objective in lightweighting: the word optimize is sometimes used loosely and can lead us astray. It’s better to think of these approaches as steps towards an optimum, and recognize that achieving total optimality is a climb up an asymptotic mountain. How far you choose to climb depends on how much a pound costs to your design. Extra baggage on the way to orbit costs a lot more than on your average road trip.

To get started, you need to select the right material. Why use steel if you can get away with aluminum? There’s a weight reduction of approximately two thirds on the table, albeit with compromises: reduced stiffness, higher cost, more difficulty in welding. A great way of visualizing these tradeoffs and rankings of mechanical properties is with Ashby Charts, which essentially represent the menu of materials that an engineer can select from (though more on that later). 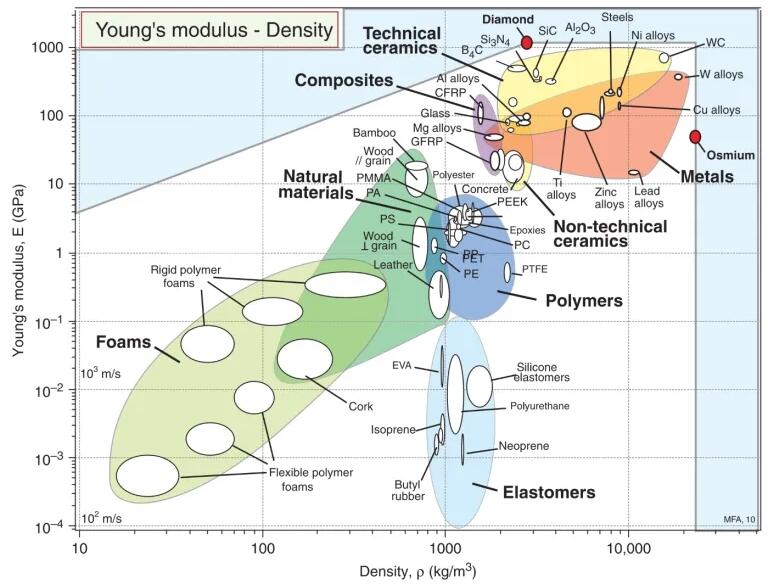 Ashby Chart for evaluating stiffness-to-weight ratio of conventional materials. This essentially represents the menu of (conventional) materials that engineers have to choose from.

These charts can compare any combination of properties, the one shown above being useful for evaluating stiffness-to-weight ratio. Note the logarithmic scale; serious lightweighting can occur just through proper material selection. Our menu of (conventional) materials varies over factors of millions in modulus, and thousands in density. Surely some opportunity for lightweighting lies somewhere in between.

Material on its own is just feedstock. Only with shape comes a structure or a part. But even using the best material can result in an overweight part if the form does not fit the function. Many assemblies are designed as such due to manufacturing rules, fastened together with nuts and bolts. These alone can add up significantly in weight, not to mention assembly time. Approaching these problems from a function-first mindset, without the shackles of traditional manufacturing rules, can be used to trim a lot of the excess which is not directly contributing to the overall function. The bulky flanges and bolts in this pipe system, for example, don’t help us at all with controlling fluid flow (ie. why we’re even building a part). Why try optimizing something which shouldn’t even exist in the first place? 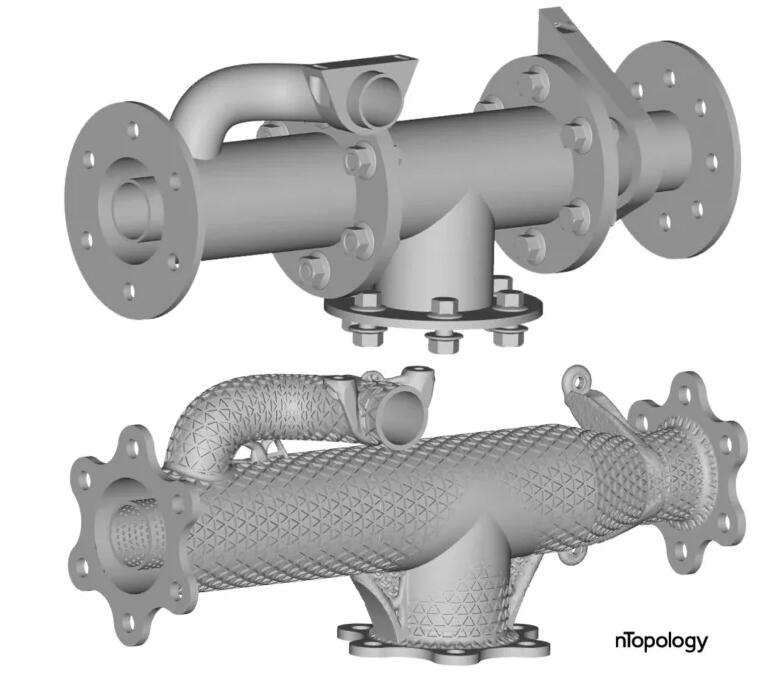 A pipe assembly lightweighted through part-consolidation and conformal ribbing.

Conformal ribbing is one of the more popular methods on this list, and is very prevalent in aerospace. Whether built from polymers, metals, or composites, conformal ribbing aims to enable thinner walls while improving buckling resistance (otherwise you’re left with a crumpled soda can).

For polymers, it can be very affordable and easily mass produced. Look underneath a plastic shipping palette or fold-out table, for example, or even the side of a milk crate. You will find conformal ribbing, which engineers use to lightweight (and reduce material usage) in these relatively simple structures.

But what can we do with stiffer and stronger materials? Isogrid, shown below, has long been popular in the space industry, with design handbooks dating back to the 1970’s. They are very expensive to produce via conventional machining: the cost-per-pound for machined metal isogrid is likely only justifiable for high-end aerospace applications, but additive manufacturing is making this technique much more accessible. 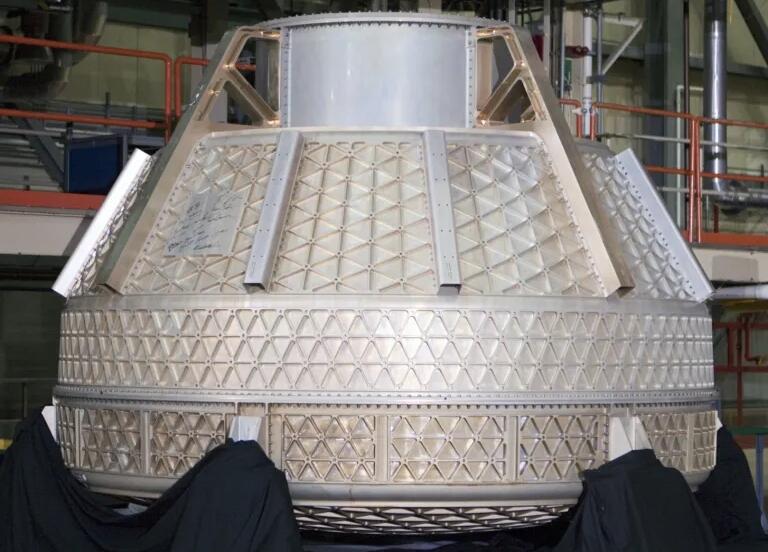 Machined metal isogrid on a spacecraft capsule. The high cost to get vehicles to orbit motivates advanced lightweighting techniques.

Lattices, cellular materials, periodic structures, architected materials… are as diverse as the assortment of names used to describe them. Fundamentally, they are hybrids of solid material and empty space (or gas) — with the precise arrangement dictating the effective mechanical properties. The amount of material is of course important as well, and is referred to as relative density (the mass of the lattice divided by the mass of a solid block of its parent material). 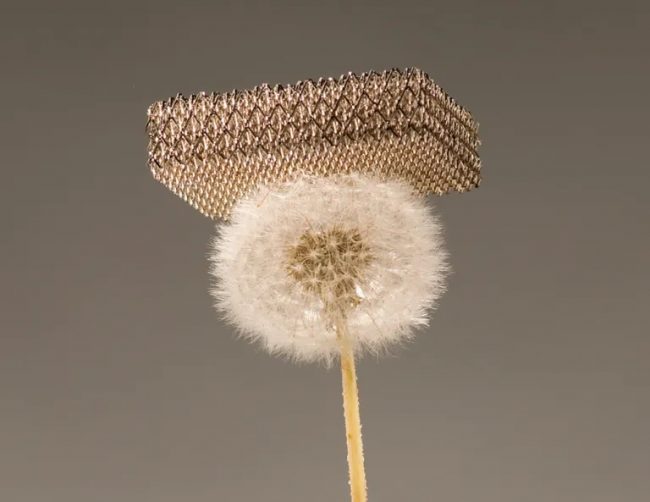 The most extreme example of lightweighting on this list: a nickel microlattice structure fabricated by HRL, with a density 100 times less than styrofoam. Each strut is a hollow nickel tube of approximately 100 nm wall thickness, manufactured through a combination of additive manufacturing and electroless plating.

Some typical suspects in the cellular world include honeycombs, foams, lattices, and shell-like continuous structures such as gyroids, each having their own pros and cons. They can also each be employed in a variety of ways: uniformly as shown below, as an infill of a shelled part, conformally over a surface, or spatially-varying within a complex domain (more on this another time). 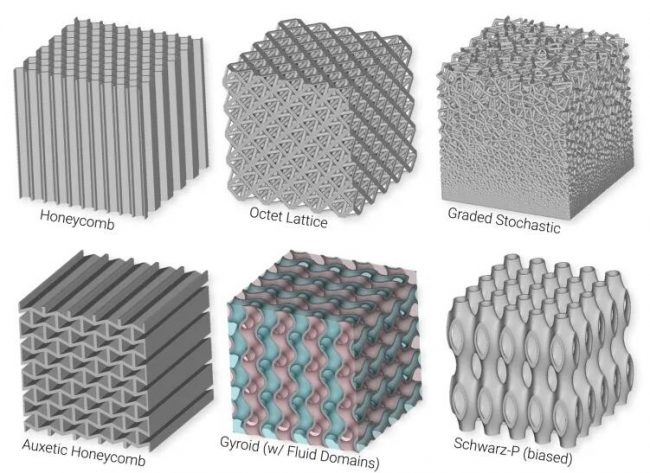 An assortment of the many topologies available for lightweighting, with brief descriptions below.

Cellular materials are perhaps most applicable to engineering in the form of sandwich structures. These are prevalent throughout all levels of the lightweighting value spectrum, from cardboard packaging to commercial aircraft to interplanetary spacecraft. The effect is all the same: separate two thin sheets of material (the bread) by a lightweight core (the filling, available in the flavors shown above), and you can attain tremendous strength and stiffness increases for a minor increase in mass. Turn this around by keeping strength and stiffness constant, and you have significant lightweighting potential.

Bending stiffness and strength benefits of lightweighting with sandwich structures, with a few examples shown.

Last stop for today: topology optimization. Some refer to this as ‘generative design’, but we’ll stick to the engineering term here. Several methods and algorithms exist, but the general idea is to apply loads and restraints to a design region, and then widdle away material from this region until some constraints and objectives are met. At the barebones level, this is usually minimizing compliance (or maximizing stiffness) subject to a volume target. Many cases require additional constraints like maximum stress or displacement, or some restriction on manufacturing technique. The result is usually something exotic and organic looking, which perhaps adds to its allure. 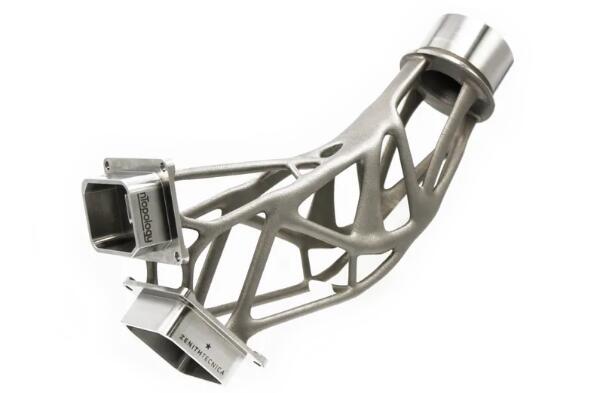 While seemingly hands-off, this approach is far from it. Some steps of it deserve automation, like reconstructing native geometry from the resultant density field or mesh. But users must take extra care in setting up their problems appropriately, and understanding the assumptions behind the algorithms which they wield. One common oversight is that many simple codes neglect buckling; consider the very long, thin, slender ligaments seen in many ‘generative design’ examples, and how these would behave when they run over a bump on the road. Likely suboptimally.

How about if those loads are applied off-angle? Uncertainty quantification and ‘design for robustness’ techniques are being developed for this now. This is less specific to topology optimization methods, but relevant to lightweight design in general: as you get closer and closer to the optimum, the result is only as appropriate as the design assumptions.

Hopefully this has got you thinking about where you can cut weight from your parts, through one or several of the approaches described above: care in material selection, consolidating parts by their functions to eliminate fasteners and redundancy, conformal ribbing for stiffening, multifunctional design with lattices and architected materials, or through topology optimization to make it lightweight and look great simultaneously. The value of a pound here and there can add up significantly: the thousands of dollars per pound for spacecraft applications makes the combination of all of these methods often justifiable.

Lightweighting is especially important to automotive. Higher performance, better fuel economy, better safety, lower emissions, and the compounding coupling effect that these all have on one another are motivating manufacturers to take their lightweighting efforts to new heights.