The audit firm EY has just published its second report, Global 3D Printing Report 2019, dedicated to additive manufacturing, following a first edition published in 2016. As expected, the market has evolved considerably in 3 years, particularly in terms of usage. According to EY’s report, today it’s 65% of the companies surveyed that claim to have used 3D printing, compared to only 24% in 2016. Four out of ten companies have even invested in their own solutions internally, taking advantage of its many benefits. The report also shows a clear shift in the geographical breakdown of the market. Asia, particularly South Korea and China, is gaining market share, against countries such as Germany or the United States.

The Global 3D Printing Report 2019 was based on the responses of 900 participants working in 726 companies around the world. 13 countries are represented in this study, mainly from the US, Europe and Asia, and from 9 different sectors of activity. In the United States it’s 219 companies that were surveyed for example.

As you will be able to see below, South Korea and China lead the way in terms of adoption of the technology, which was not the case in 2016. As the report points out, this could reflect on their more dynamic economic development in recent years, which also extends to the AM market. Another possibility is that they have recognized the potential in using emerging technologies to build a new competitive advantage, in place of their previous dependence on cost leadership. 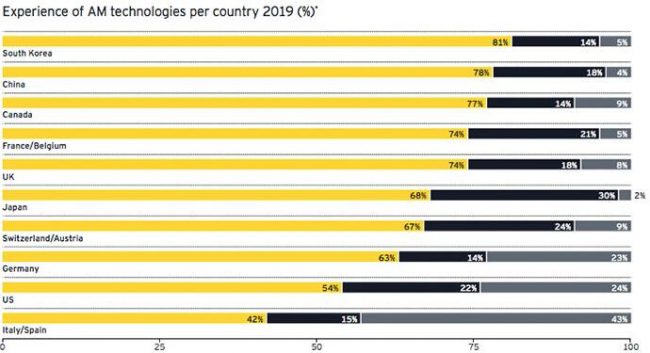 In terms of sectors, it’s the aerospace sector that accumulates the most experience in additive manufacturing technologies. 78% of companies in this sector claim to have used the technology. Sectors that have a lower adoption rate have still shown a tremendous increase in adoption compared to 2016. For example, the interest in and experience of AM among logistics and transportation companies, for example, is now six times higher than in 2016. 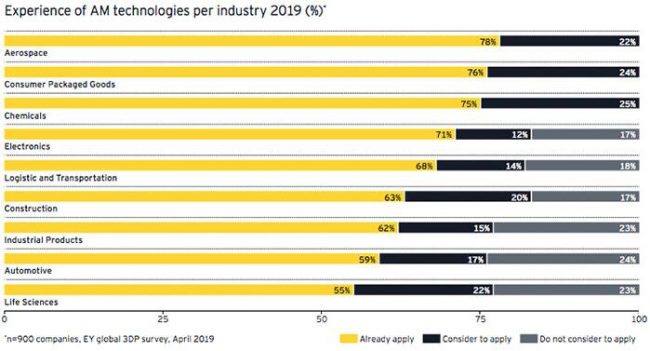 AM Serial Production Takes Off

It’s been discussed in the last months that additive manufacturing will move beyond prototyping. In fact, the technology is increasingly being adopted for the creation of functional parts. These parts include end-use components & final parts used by the client; tools and molds used in traditional manufacturing; and spare parts made on demand from digital warehouses. Almost one third of companies surveyed by EY produced one or more of these three types of functional parts in 2019. More precisely, 18% use the technology to make end components, and 15% and 14% of companies use AM to directly manufacture tools and spare parts, respectively.

In terms of forecasts, it’s 46% of companies that expect to apply the technology for their serial products by 2022, compared to 18% currently. This figure is not consistent across the various countries surveyed, for example Asia is setting the pace. Below you can see a breakdown of some of the regions surveyed:

One of the main benefits of 3D printing according to the participants is its ability to create solutions that meet customer demand, offering them a clear competitive advantage. Just look at the number of custom-made 3D printed parts that exist today, regardless of the sector of activity. The technology is all the more interesting because it reduces lead times and manufacturing costs. Finally, it is important to note that additive manufacturing has an impact on the entire supply chain, particularly the way parts will be stored: 48% of participants hope to digitize their stocks and thus produce on demand, a boom for the spare parts market. 56% think that 3D printing reduces logistics and transport efforts. 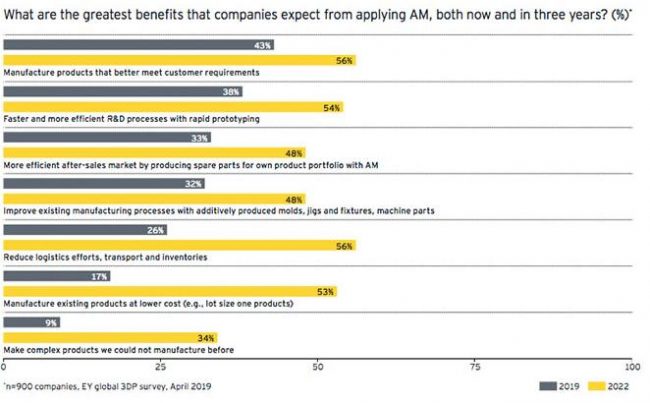 While the benefits of technology are many, some limitations remain, particularly in terms of price. For 90% of the participants, 3D printing materials are still too expensive, hindering its adoption – as is the case for the cost of the systems, 87% consider it too high. There is also a lack of knowledge, whether in design or production, that would prevent 50% of the companies surveyed from investing in 3D printing solutions. However, some training opportunities are beginning to develop that could remove some barriers.

According to the Global 3D Printing Report 2019, we can be confident about the growth of additive manufacturing. The report forecasts annual market growth of 25% until 2023, reaching $27.4 billion worldwide. This is good news for the sector, which should see the introduction of new materials, the evolution of its machines in terms of speed, price and software, but also an increase in the number of 3D printed end-use parts, gradually surpassing rapid prototyping applications.