MAESTRO project aims at improving the productivity while reducing the cost of high value parts. To this end, one solution is explored: hybrid manufacturing. It consists in combining at least two processes synergistically to build one part. In MAESTRO project, the goal is to build and test hybrid samples. The first part of this task has been well achieved recently. The different partners involved in this work were: CEA, OBE, UoB and IPC.

Hybrid specimens are made of:
– A 316 L MIM preform realised at OBE. The powder used for the preforms was characterised by CEA in a previous work package.
– A top part made by DMLS at IPC with EOS 316L powder.

The powder used in the MIM process was chosen among a panel of 4 powders from different suppliers. CEA was in charge of the characterisation and OBE of the injection of the test bars (link). 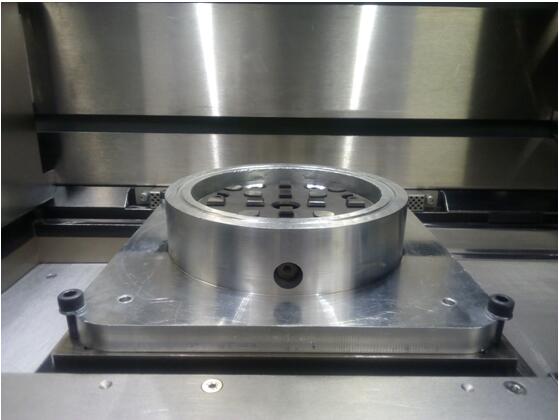 The fastening of the MIM preforms during DMLS process runs, has been achieved via a custom workholding device which was developed and validated at the University of Birmingham.

It is composed of two units. The first unit, called main assembly as shown in Figure 1 which consists of standardised components: 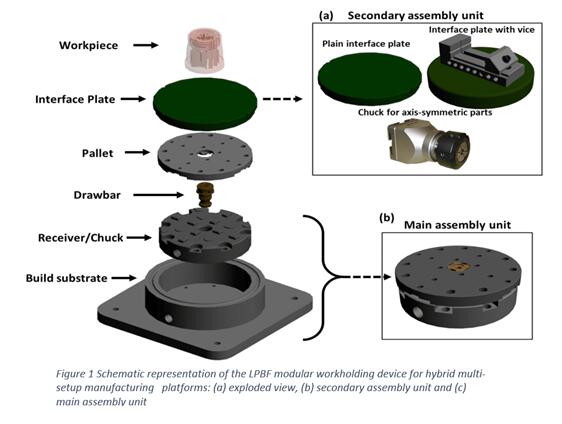 – A chuck (receiver) that can be precisely fixed and referenced either to a mechanical stage (rotary or linear), see picture above;
– A drawbar that ensures to precisely attach the pallet of the workholding device manually or automatically;
– A pallet that totes the secondary assembly unit of the workpiece holding device.

The secondary assembly unit shown in Figure 1b integrates workholding extensions, i.e. interface plates and adapters/extensions, which provide the necessary flexibility and make it feasible to realise different processing setups for positioning and fixing workpieces with various dimensions and shapes. 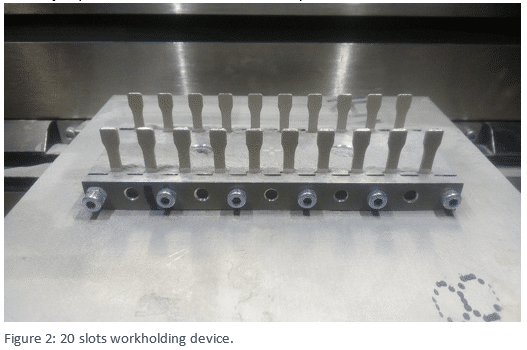 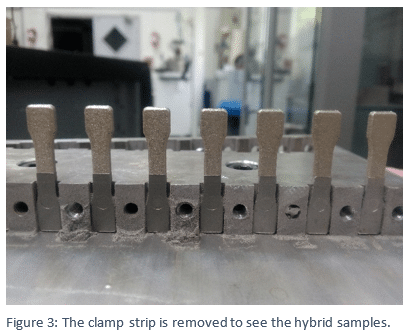 As shown in Figure 1b, examples of workholding extensions than can be unified into the secondary assembly unit include:

– Interface plate;
– Interface plate with integrated universal vice for holding preforms with various geometrical designs;
– Chucks for holding axis-symmetric preforms and that can be directly post-processed, e.g. by milling and laser polishing/structuring/texturing, after the laser-based PBF process without detaching the workpiece from the workholding device and thus to setting it up seamlessly any follow processing with required ARR.

The same components (receivers and pallets) are used to ensure the modularity of the proposed DMLS workholding device across all setups of the proposed hybrid manufacturing platform. In this way the same Workpiece Coordinate System (WCS) can be preserved in each step: scanning MIM preforms, hybrid production, and scanning after production.

In addition, it is worth highlighting that the positional repeatability of such workholding device is better than 1 µm.

Furthermore, in order to precisely align and correlate the preforms and DMLS parts coordinate systems, an alignment methodology has been exclusively designed for the project. Whilst, the modularity of the custom workholding fixture through the different modules, is ensured by mounting of the device on the aforementioned commercially available, already proven, high precision universal tools supplied by System 3r (GF). Particularly, repetition accuracy and positioning are within the extremely tight tolerance of 4 μm. Thus, leading to high precision outputs.

As this task investigates the interface, specimen’s interfaces have a different surface preparation: sawn, laser textured and sand blasted. During DMLS production, 3 samples per job have a double exposition for 4 layers at the interface.

The characterisation of the interface will include hardness and tensile testing. It is also planned to have EBSD, microstructure and SEM analysis.

This work is realised in collaboration with IPC, OBE, UoB and CEA shows the good integration of different modules into the MAESTRO modular platform.