3D-printed metal implants have been a well-established application in the world of additive manufacturing for many years.

Back in 2017, five graduates from the Technical University of Munich set their sights on printing implants for human use – cranial plates made of plastic, for instance – in founding the start-up Kumovis. Five years on, the young company has become so successful that it now employs 26 people and has been purchased by 3D Systems, an AM industry giant based in the U.S. 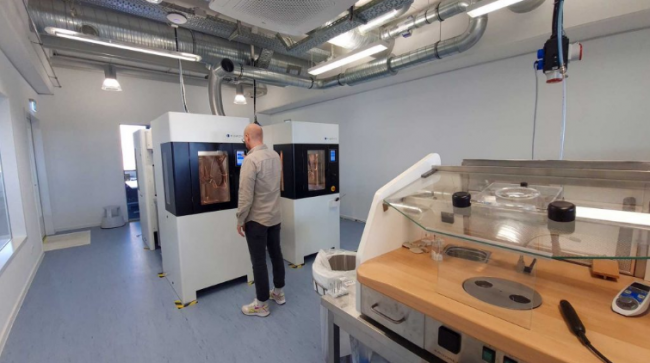 The main engine of Kumovis’ growth has been its R1 printer, which it launched in 2019. Since then, multiple advancements have been made in the unit, and it remains the company’s main product. According to its manufacturer, the Kumovis R1 combines a cleanroom environment with component mechanics in a unique way that makes it particularly good at turning PEEK materials into implants and medical technology products. Its printing process is based on specially developed fused layer manufacturing (FLM) technology. Besides selling the R1, Kumovis also helps its customers deal with important issues related to post-processing, the requirements medical implants have to meet, and the provision of regulatory data. Meanwhile, the company’s customer base has grown considerably, as well. Along with manufacturers of medical products, three hospitals have now procured their own R1 printers.

For co-founder and CEO Miriam Haerst, however, Kumovis’ technology isn’t the only reason why the company has been so successful. “It’s actually been a lot of different factors,” she says. For example, her company first attended Formnext as an exhibitor not long after its foundation in 2017. The following year, it moved from its initial home at TUM to its own office, acquired two investors (a family office in Bavaria and High-Tech Gründerfonds), and promptly won the Formnext Start-up Challenge. “All this helped us expand our network further,” Haerst reveals.

Based on her five years of experience as a successful entrepreneur, Haerst underscores how crucial it is for young companies to be present at events like Formnext, even if they don’t take home an award in the process. “Having a market-ready product to exhibit can be a big challenge for start-ups, but at the end of the day, there are so many advantages,” the 35-year-old continues. “Achieving a certain level of visibility is extremely helpful. You also get feedback from the market – along with criticism, of course, which isn’t always easy to hear. Ultimately, though, it gives you the chance to fine-tune your product and make further improvements.”

Kumovis is now an established player in the market, but maintains a clear focus on medical technology customers when attending exhibitions. “That said, we interact with other attendees in different ways these days,” Haerst says. “It used to be about testing out our business idea and building a network. Today, customers already know us, and many of them stop by to see the latest innovations we’ve come up with.”

Over time, Kumovis has also had more and more dealings with material manufacturers, which was why it only made sense for two experts in plastic – Solvay (through its investment subsidiary Solvay Ventures) and Renolit – to purchase stakes in the young company in a round of series A funding in 2019. The topic of materials is an important one for a hardware manufacturer, after all. “There’s such a wide range of plastics out there,” Haerst points out. “Even with the established types, there are still exciting developments – for the production of implants that fuse better to bone, for example.”

In 2021, Kumovis took another key step in its development by establishing a subsidiary in the United States. Its acquisition by 3D Systems, which was completed in April of this year, promises to be at least as significant a milestone.