May 10, 2022, EOS sister company AMCM completed the print of the world’s largest aerospike rocket engine. It was engineered completely in Hyperganic Core using advanced software algorithms and has never seen a single piece of manual CAD. It’s likely the most complex AM part ever produced — it broke all conventional workflows. AMCM printed it in copper in their massive 1m build volume machine. The engine stands at 80cm tall.

This aerospike rocket engine is a demonstration of what’s possible when you combine the power of software algorithms with the world’s most advanced Additive Manufacturing systems.

People have been trying to build aerospikes for a long time. The Space Shuttle was supposed to have a linear one. But nobody could make it work at the time, given the manufacturing methods. The aerospike has significant advantages over traditional bell nozzle designs. It’s altitude compensating and does away with the heavy nozzle extension, with a spike in the middle instead. It’s easily 15-20% more efficient than bell nozzle engines. This is a dramatic improvement in the field of rocketry where even fractions of percentage points are worth pursuing. The challenge was always cooling the spike in the middle of the extremely hot exhaust gas. 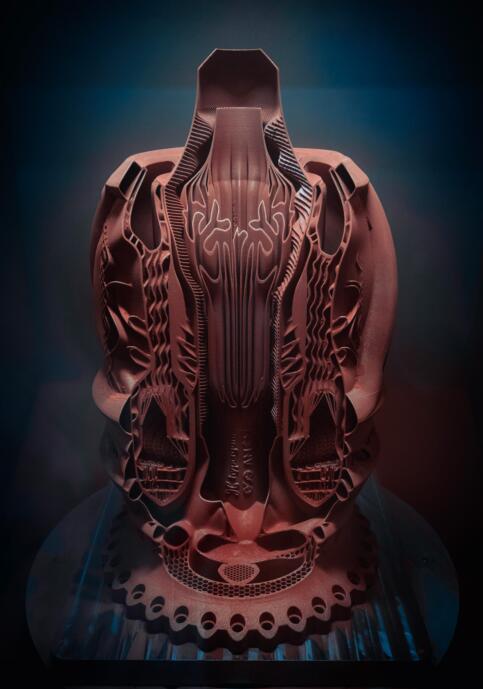 With Additive Manufacturing, these kinds of objects can be produced finally. And a few startups have been successful in initial designs. The problem now: create a reliably working engine that can power a spaceship. This requires many iterations — and iterations in CAD are prohibitively complicated, especially for complex designs. This is where Hyperganic Core and Algorithmic Engineering come into play.