3D printing is one of today’s most successful production technologies. Within the framework of an EU project, Siemens has developed a solution that makes it possible to use a high-speed printing process known as laser metal deposition more effectively than was previously possible. This solution is opening the door to an expanding range of 3D printing applications.

In a Siemens Corporate Technology (CT) laboratory in Munich, Daniel Regulin is looking through protective goggles at a laser beam that is moving across the semi-finished housing of an industrial engine in the midst of a shower of sparks. The laser beam is melting a metal powder that is being blown into it by a stream of gas emitted by a nozzle. The melted powder is building up a metal component, layer by layer, in a process known as “laser metal deposition” (LMD) or laser deposition welding. A machine moves the laser beam at varying speeds, sometimes quite slowly and faster at other times. “In this way we smooth out the uneven places so that we can ultimately produce a workpiece that is as close to perfect as we can make it,” says Regulin, explaining how the machine works. “This will help us make increasing use of LMD in automated industrial production processes.”

Building Parts from a Bed of Powder
Regulin, one of thousands of engineers, mathematicians, and software developers at CT who are working hand in hand with Siemens business units to forge ahead with the development of tomorrow’s technologies, wants to make LMD the next milestone in 3D printing. Otherwise known as additive manufacturing, 3D printing is changing the face of industrial production. 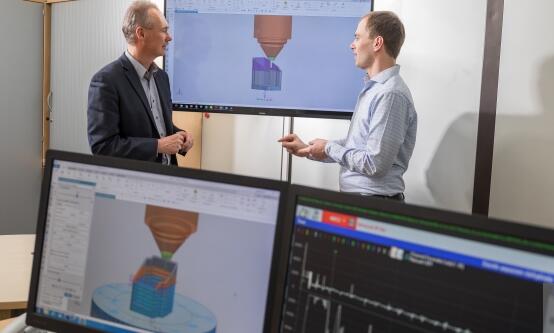 Discussing the opportunities of LMD thanks to simulation software: Heinz-Ingo Schneider (left) and Daniel Regulin.

Today the leading process for printing metals is selective laser melting (SLM), which is also known as the powder bed method. Here, a component is built up by a laser, one layer at a time, from a bed of powder material in a chamber. For years now, Siemens has been refining this technology by means of simulation software, control systems for 3D printers, digital integration into the industrial value chain and, last but not least, its own 3D-manufactured products for the energy sector, such as gas turbine burners.

Immense Advantages
However, laser metal deposition (LMD) is increasingly being seen as an alternative to SLM. An analysis conducted by the US market research institute Research and Markets concluded that LMD is the technology with the highest growth rates in this young industrial sector.

The reasons for this prognosis are obvious. LMD does not depend on pressure chambers, which shield the printing process from its surroundings. With SLM, work areas must first be flooded with inert gases, which isa time-consuming process. With laser metal deposition, on the other hand, the printing process can begin immediately, because the inert gases flow directly out of the laser head and envelop the stream of powder and the weld pool.

In addition, LMD technology allows the laser head and workpieces to move more flexibly, thus opening the door to increased design freedom and the production of larger components – a potential advantage in areas such as the aviation industry and turbine technology. What’s more, as a rule, LMD does not require any supporting structures, – a significant advantage compared to the powder bed method, in which supporting structures help to balance out material stresses. Because these structures are needed only during the manufacturing process, they have to be removed and recycled after printing has been completed, a step that requires the connection points of such components to be subsequently re-machined. And finally, laser metal deposition conserves resources, because almost all the raw material is used during the production process.

Reducing LMD’s Variability
In view of these advantages, CT is working with Siemens’ Digital Factory division to establish LMD technology more firmly in industrial production. “We’ve got all the know-how that is needed for the industrial automation of 3D printing,” says Heinz-Ingo Schneider from the Digital Factory division. “That’s why we think there’s tremendous potential for laser metal deposition.”

However, there’s still work to be done before LMD can achieve its full potential. For example, the process is less precise than SLM. As a result, finished components generally have to be re-machined, which explains why LMD machines have typically been combined with milling machines in industrial facilities. Hybrid systems of this kind are used all over the world today in order to produce precise components for aircraft turbines and roller bearings. 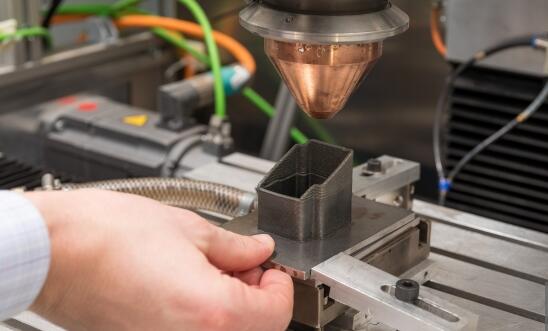 The work of Siemens CT and Digital Factory aims to make the production via LMD faster and more cost-effective.

Considering this drawback, Daniel Regulin is now focusing on how to help the Digital Factory division make hybrid systems operate faster and more cost-effectively. Specifically, he’s looking at a key part of the LMD process: the frequently varying thicknesses of metal layers, which determine the size of printed components. These thicknesses can vary because of several reasons – for example, if the flow of material changes in an unplanned way. Thicknesses can also vary if the speed of the printing head, which is carried by a robot arm, fluctuates.

To deal with this problem, Siemens CT is participating in an EU development project called PARADDISE (Productive, Affordable and Reliable solution for large scale manufacturing of metallic components by combining laser-based ADDItive and Subtractive processes with high Efficiency), which is desiged to minimize or eliminate the variability of the LMD printing process. 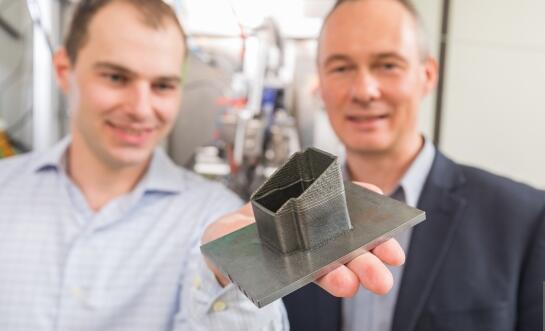 Self-Regulating Process
In addition to Siemens, the project’s members include Spanish machine tool manufacturer Ibarmia, RWTH Aachen University, and Precitec, a German specialist for laser material processing and optical measuring technology. Their work focuses on the production of a low-pressure housing and an extrusion screw – a cylinder with a spiral thread that is used in industry to press viscous masses through openings that shape them.

Regulin’s project team, supported by RWTH Aachen University, has contributed a pioneering invention to the project’s development process. The team has developed a control technology in which a Precitec sensor calculates the exact thickness of each metal layer that has been laid down. In order to accomplish this, the control program uses the sensor, which measures optical interference, to compare the planned height of a component with its actual height. The thickness of the layers can then be adjusted by altering the printing speed. The result is a milestone. A self-regulating process that enables hybrid machines to produce components faster, because the blanks require less post-processing. And it also requires less energy and material. That, in turn, reduces the cost of high-quality metal components.

Schneider and Regulin are now considering possible ways of integrating this technology into the Digital Factory division’s product range. Many leading manufacturers of LMD machines are potential customers of this process-control technology. However, the long-term goal is to one day bring this process to such a point that printed components leave the machine in a state that is ready for delivery. “For now, post-processing will continue to be necessary, but we can already increase the reliability of the process to a significant degree,” says Schneider.