The impact of COVID-19 on the global 3D printing industry in 2020 was vastly varied: there was new demand in some regions and sectors while business was significantly recessed in others. Worldwide revenue from 3D printing services reportedly grew marginally over the year, thus leading to nominal growth for the industry as a whole (that is, services, software, materials and printer system hardware combined) with some of this growth aided by way of much-needed local government subsidies in the West. Further clouding the nature of any revenue growth seen in 2020 was consolidation, a key trend for 2020 whereby companies grew by way of merger as opposed to by way of organic industry growth. Focusing just on printer hardware, revenue from global shipments of new printer systems fell −4% from 2019 levels, in spite of a strong rebound in China’s domestic economy that led to increased year-on-year sales of Industrial printers in that region; an explosion at the other end of the market in the Kit & Hobby sector across the globe; and a select few Western hardware manufacturers seeing spotty growth. New Industrial printers accounted for 52% of revenues from sales of systems but, with many key end-markets in the West delaying major capital expenditure until after the pandemic, revenue from this sector slid by −21% compared to 2019. Conversely, demand for consumer-centric kits selling for a few hundred dollars soared as many people looked for new hobbies to while away their time at home: revenues from this newly tracked segment almost doubled in 2020. 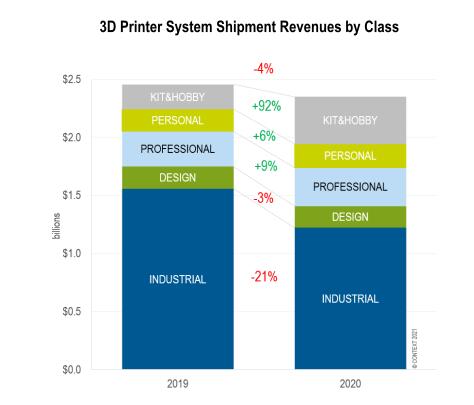 Shipments of Industrial printers were marginally higher (+4%) in Q4 2020 than in the same period the previous year mostly because of increases in the domestic market in China (83% of printers sold in the country came from Chinese companies). While this Y/Y growth rate for the quarter was low, the good news is that sequential unit shipments continued to rise – as they have done since their nadir at the onset of the pandemic in Q1 2020 – with +24% more printers shipped in Q4 2020 than in Q3 2020. A year-on-year growth of +11% in the metal printers market during the last quarter of the year was mostly thanks to sales of new Binder Jetting printers in the West and increased shipments of Powder Bed Fusion models into China. Over the full year, Industrial printer shipments were down −21% with the only increases coming from lower-volume classes of metal printers including Directed Energy Deposition solutions (+9% more printers using this technology shipped globally in 2020 than in 2019) and Binder Jetting shipments (up +30% from 2019). Regionally, Chinese vendors recovered after the hard lockdown of Q1 2020, and saw shipments in this overall price class rise by +7%, while other companies – most of which are from the West (that is, the US and Europe or the US and Israel in the case of Stratasys) – saw collective unit shipments in this class drop by −29%. Most new Industrial printers still sold into North America (34% in 2020, down from 41% in 2019) but 30% went to China in 2020 thus moving it ahead of Western Europe. Leading vendors over the year in terms of unit volumes included UnionTech, Stratasys, HP, Carbon, EOS, 3D Systems, Farsoon, HBD, GE Additive and Desktop Metal.

Design-class printer shipments were largely flat in Q4 2020 falling by only a marginal −1% compared to the same period the previous year. Once again, a greater number of printers were shipped to the US and Europe than to Asia with American companies Stratasys, 3D Systems and EnvisionTEC (recently acquired by Desktop Metal) continuing to lead the market. Total unit shipments for the full year were down −15% with industry leaders Stratasys and 3D Systems both challenged.

While the first part of the year saw a surge in shipments of Professional printers, growth slowed in H2 2020 and shipments in the fourth quarter were actually down −16% from a year before. Demand from homeworkers was strong in H1 2020 but, over the year as a whole, shipments ended up being −6% down on 2019. Although some vendors (EnvisionTEC, for example) reported nice growth, market leaders Ultimaker and Formlabs both saw year-on-year falls in unit volumes. Even so, these two leading vendors saw revenues rise having introduced well-received products at higher price points in 2020. Composite 3D printers gained traction in this class during this year as well; the category has, until now, largely been owned by Markforged but key competitor Desktop Metal began shipping a composite model in Q4 2020.

Sales of cheaper, fully assembled printers have been on the wane over the past few years as demand shifted down to Kits or upward into the Professional class, but demand (and shipments) in this Personal class rebounded during the pandemic. In Q4 2020, total Personal 3D printer shipments rose by +49% from the year before thanks mostly to the explosion in interest in LCD models. There was strong demand throughout the year thanks to pandemic-related working and studying from home and increased hobby time. Factory closures (especially in China) caused problems in Q1 2020 but supply came roaring back in later quarters and resulted in a +49% year-on-year growth in shipments for this price class.

Companies such as China’s Creality 3D and the Czech Republic’s Prusa Research have helped to bring order to this difficult-to-quantify sector in recent years. DIY printer shipments exploded in 2020 with Creality 3D leading the charge, reportedly shipping over 1M units over the year (989K of which fall into this Kit & Hobby category with the rest being fully built units shown in the Personal price class). While shipments trailed off a bit in the final quarter, full-year data shows growth of +98% from 2019 to 2020. Creality 3D alone saw shipments increase by +116% and was so successful that their revenues outstripped those of most companies selling Industrial printers. As most kits are imported as parts, they often do not carry the same import duties as their finished-good counterparts, allowing them to be sold at ultra-low price points helping to encourage open architecture and the “tinkering” associated with hobbyists.

With Industrial, Design and Professional printer shipments all trailing 2019 totals, 2020 was a difficult year for the higher end of the 3D printer market. Growth is set to return in 2021. While Design and Professional shipments are projected to rise even above pre-pandemic 2019 totals this year, US and European companies are still offering relatively conservative forecasts for the Industrial sector, predicting that while shipments will rise above last year, sales will continue to lag behind those of 2019. There is hopeful anticipation that growth will accelerate in H2 2021 and a full rebound of this market is now projected for 2022+. Further use of 3D printing for mass production is still the key for accelerating growth and technologies such as Powder Bed Fusion and Vat Photopolymerization (for plastics) and Binder Jetting (for metals) are poised to help with this push.