3D scanning has evolved rapidly since its invention in the 1960s to a point where today the technology offers immense value for a wide variety of industries. 3D scanning devices use various scanning technologies and formats to fit specific use cases. 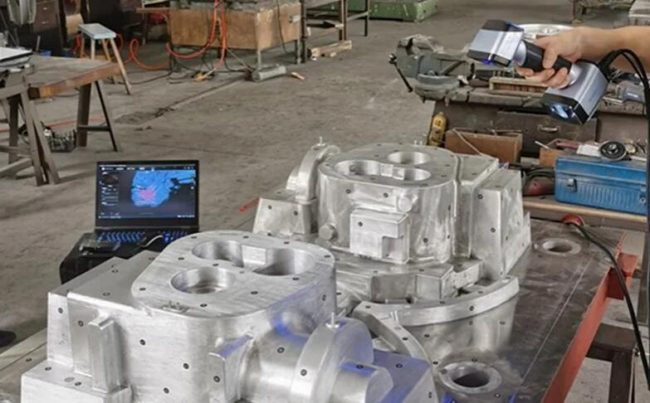 3D scanning works using lasers, light, or sensors in the scanner to detect the surface of the object being scanned and assigning data points to the location of that surface. Those data points blanket the surface(s) of the part three-dimensionally and are collected and compiled to recreate the object in extremely accurate digital detail. A 3D scanner is also capable of capturing the colormap of an object. By merging the color map onto the 3D model, a color 3D digital model is created.

Traditionally 3D scanning has been linked closely to 3D printing; however, only a segment of 3D scanning is used in conjunction with 3D printing. Many applications use the collected 3D data for other application-specific uses such as investigation, inspection, or further manipulation of the 3D model for design or testing.

The quality of 3D scanners has exponentially increased over the last decade thanks to the convergence of various technologies and the increase in the quality of sensors and lasers, combined with a significant reduction in essential components’ cost. Additionally, the dedicated investment by a select group of 3D scanning companies into the technology has elevated it from a nice to have design tool to an essential asset in many industries. Where and how the technology is currently incorporated is detailed more below.

There are four broad categories of 3D scanners, each using a different set of physical principles.

Structured light 3D scanners use trigonometric triangulation by projecting a series of linear patterns onto the target object. The system then examines each line’s edges in the pattern to calculate the distance from the scanner to the object’s surface. The structured light used for 3D scanning is either white or blue and is generated by various projectors, including Digital Light Processing (DLP) technology. The projected pattern is usually a series of light rays but can also be a randomized dot matrix. Contact-based 3D scanning is also sometimes known simply as digitizing. Contact 3D scanners work by physically touching the object, which is held firmly in place to gain information about the object’s dimensions. The scanner’s probe moves across the surface of the object recording data. In some cases, the probe may be attached to an articulated arm capable of collecting all its respective configurations and angles for more precision. Some specific configurations of contact-based 3D scanners are called Coordinate Measuring Machines (CMM).

Laser triangulation-based 3D scanners use either a laser line or a single laser point to scan across an object. The 3D scanner casts the laser, and as the laser light reflects off the 3D scanned object, its initial trajectory is modified and picked up by a sensor. As the distance from the sensors to the laser source is known, accurate point measurements can be made by calculating the laser light’s reflection angle. With the knowledge of the distance of the scanner from the object, the scanning hardware can map the surface of the object and thereby record a 3D scan. Laser pulse-based 3D scanners, sometimes called Time-of-Flight scanners or Lidar, measure the time it takes for a laser to travel from its source to an object and back. Because we know the exact speed of light, the time traveled by the laser provides the exact distance between the 3D scanner and the object. To gain the most precise measurement possible, the 3D scanner computes millions of laser pulses with picosecond (0.000000001 seconds!) accuracy. It then compiles all of the data to create the digital 3D model.

Photogrammetry uses cameras to capture the 3D shape and data of an object. Photogrammetry is based on a mix of computer vision and powerful computational geometry algorithms. The principle of photogrammetry is to analyze several photographs of a static subject, taken from different viewpoints, and to automatically detect pixels corresponding to the same physical point. Its key strength is that it is easy to apply to large objects, including entire vehicles, buildings, giant sculptures, terrain, and more. The accuracy of this method may fall short when the object is very large, complex, or the conditions are not precise.

3D scanners can be classified into several categories, depending on their design, technical specifications, and fields of applications. A single scanner may incorporate multiple scanning technologies.

Portable 3D scanners and handheld 3D scanners are designed to be carried and operated by hand. The operator points the scanner at the object, moving it slowly around the object, capturing it from different angles until there is sufficient data to create a 3D model of the object.

Handheld 3D scanners are advantageous for hard-to-reach spaces, awkwardly sized objects, or objects that need to be accessed outside. Handheld scanners range in quality and application. Some are designed specifically for small objects with many details, such as human teeth, while others are designed to capture cars and machines. Many portable 3D scanners are also able to capture texture and color information to assist in building photo-realistic 3Dmodels. Most scanners require both a data cable and a power cable to be connected at all times, though there are also some genuinely wireless models. Industrial 3D scanners come in a wide variety of shapes to address specific use cases and may be integrated into industrial workflows. Typical applications include reverse engineering, part inspection, and maintenance. Industrial-grade 3D scanning systems can leverage many different 3D scanning technologies, sometimes in combination, to offer the best possible performance.

3D scanning technology enables innovation in a wide variety of industries, and uses for the still-maturing technology are increasingly being discovered. With this rapid growth and broad adoption comes some challenges.

Among the most significant challenges towards ubiquitous 3D scanning use is compute. While every 3D scanning device will have different requirements, decent graphics cards, RAM, and storage are essential. 3D scanning files are generally hefty.

3D scanners are nothing without the software to transform the data into understandable and applicable information. Many 3D scanning products are sold with native software designed for use with the specific product or range of products. Others have been designed in conjunction with leading 3D software.

Many 3D scanning products have been developed with the intention of being as user friendly as possible. Most handheld scanners will market themselves as being able to be used with very little training or prior skills in scanning. That said, there is still a level of skill required to get high accurate scans that can be a barrier to use. Additionally, many 3D scanning products require particular environmental conditions such as even bright lighting to capture highly accurate scans. In some cases, the inability to create such environments is a barrier to use or a reason why scanning doesn’t become widely adopted in a process.

For a product that didn’t widely exist ten years ago, 3D scanning is now present in almost all industries. Different areas are using 3D scanning in far-ranging ways that don’t just mean creating a full 3D model. From agriculture to electric vehicles, key industries have found applications for 3D scanning that utilize the technology ability to accurately gather data about size, shape, and appearance.

Industrial applications for 3D scanning fall broadly into two categories of design and inspection. Design applications include reverse engineering, where existing objects are scanned to provide highly accurate models to examine their exact makeup or construction. In some cases, this is done with the intent to improve the design through further manipulation of the 3D model via generative design. Industrial inspection using laser scanners can be used to inspect the recently produced product for quality; the inspection may also be done on materials under load as part of predictive maintenance.

The medical industry is embracing 3D scanning, finding ways to use the technology for diagnosis, treatment, and research. Hand-held scanners are used to gain fast and accurate models of patient’s bodies without the cost, time, or potential damage of X-ray. These models are also used as record-keeping to monitor a patient’s development.

Dentistry has also fully embraced 3D scanning. Specific scanning products have been developed that allow dentists to take highly accurate models of a patient’s mouth and teeth for both diagnosis purposes as well as to create a mold for dentures and other dental interventions.

The architectural engineering sector uses 3D scanning at a variety of scales, from quickly building up 3D models of buildings to restoring lost architectural details. 3D scanning is also used in monitoring the facades of heritage buildings.

3D scanning is used live on archaeological digs to build updated models of live dig sites as well as in research facilities as a method of preserving and archiving objects. 3D scanning is also used as part of the method in building accurate models of buildings, gardens, and spaces, long destroyed and bringing them back to life through the power of Virtual Reality.

A convergence of technology has improved the technology to a point where 3D scanning has applications across all industries. 3D scanning technology can drive innovation by providing new ways to understand and manipulate the data of objects. As both the hardware and software continue to improve, 3D scanning is set to grow and expand exponentially.