As the COVID-19 pandemic has ripped through much of the world this year, 3D printing has emerged as an agile and effective technology for producing personal protective equipment, medical equipment prototypes and nose swabs. But GM, which has been steadily upping its investments in 3D printing over the past couple years, is betting that the business benefits will continue long after the current crisis subsides. The company added 17 production-grade Stratasys FDM® 3D printers to its fleet at the end of 2019 and has been turning to 3D printed tooling for speed, weight reduction and cost efficiency on its production lines. 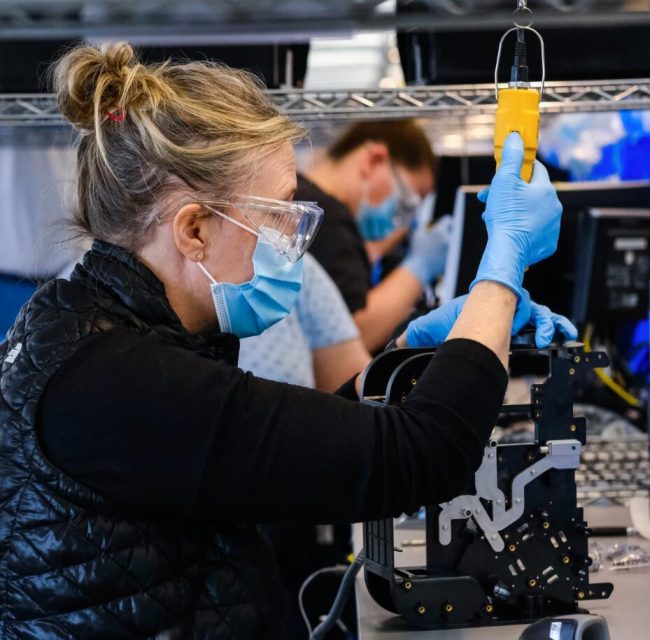 “With the pace of change in modern industry accelerating and business uncertainty increasing, 3D printing technology is helping us meet these challenges and become more nimble as a company,” says GM’s director of additive manufacturing, Ron Daul. “We’ve been on this journey for more than 30 years, but 3D printing is becoming even more widespread at our company, with more than 700 employees now trained to use the technology. Additive manufacturing is consistently providing us more rapid and efficient product development, tooling and assembly aids, with even more benefits to come.”

An April 2020 study by SME Media* found that 25 percent of U.S. manufacturing professionals were planning to change their supply chains in response to the pandemic, and 3D printing was the top choice (with robotics) of 11 manufacturing technologies for post-COVID investment. The technology can be used to 3D print spare parts, produce end-use parts closer to assembly, help manufacturing lines retool faster, and develop new and better prototypes more quickly. GM is moving faster than some companies to seize a competitive advantage. The company has used 3D printing since 1989 for prototyping. In fact, 75 percent of the parts in the prototype of its 2020 Chevrolet Corvette were 3D-printed, and GM now has 3D printers installed in many production facilities around the world. The company is increasingly moving beyond prototyping to production-related applications like tooling.

A big test of this application came in April 2020 when GM entered into contract with the U.S. Department of Health and Human Services to deliver a 30,000-unit order for critical care ventilators, in conjunction with Ventec Life Systems, by the end of August. The company reverse-engineered part data for tooling fixtures from the original ventilator manufacturer, and started 3D printing them the next day. All 3D printed tooling used for critical care ventilators was 3D printed on Stratasys systems. When the company requires more 3D printing capacity, there is an automatic offload path to Stratasys Direct Manufacturing for parts on demand. This helps GM run at a high utilization rate for its existing machines, expanding in-house capacity when it can ensure it has a sustained need for it.

Material innovation and machine repeatability have made a difference. For example, Nylon12 Carbon Fiber is a composite material containing 35 percent chopped carbon fiber by weight, which translates to an exceptionally high strength-to-weight ratio, even in places subjected to heavy vibrations. As a result, heavy parts that would have previously required metal can now be 3D printed in polymers. And production-grade systems like the Stratasys F900 have been designed to not only perform to a high degree of precision but also consistency so that every part is as identical as possible.

“GM is making the smart investments in 3D printing to succeed in this new normal of uncertainty and disruption,” says Stratasys Americas President Rich Garrity. “As a result, GM has manufacturing lines that are more adaptable and less expensive, and products that are developed faster and better. They are a clear model for the future of additive manufacturing in the automotive industry.”