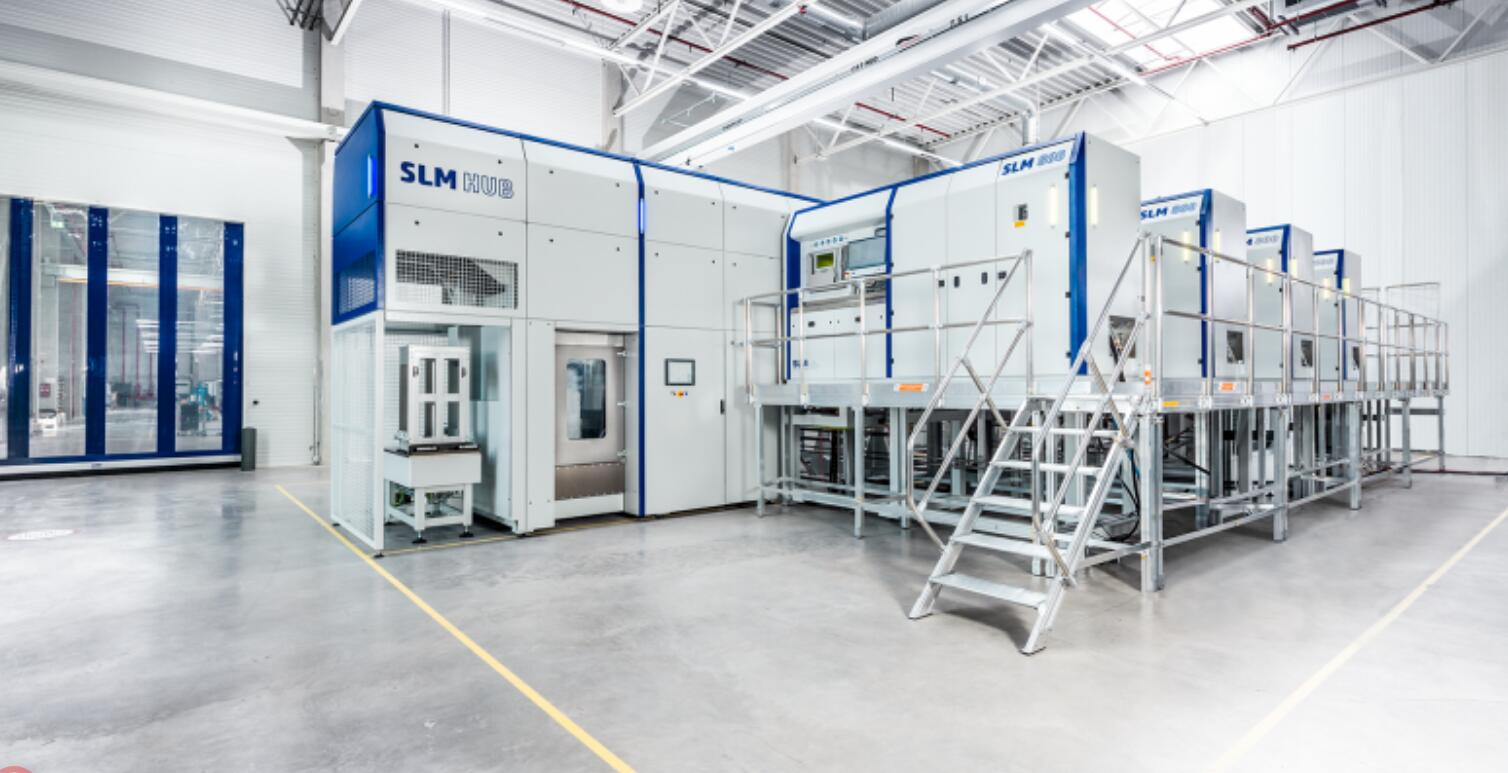 Since launching the SLM 800 system, SLM Solutions has continued to develop and enhance its metal AM solution, fine tuning controls and hardware as well as integrating multi-machine setup capabilities. The latter is one of the biggest recent advancements in the company’s technology and it paves the way for autonomous, continuous and scalable production of large metal parts.

To fully investigate the potential of SLM Solutions’ largest multi-laser SLM system, we’re going to breakdown the features that make the SLM 800 what it is.

Unlike many large-format additive manufacturing systems, the SLM 800 does not integrate a particularly broad print envelope, opting instead for a tall build space of 850 mm. This approach, the company says, enables large parts to be produced at more rapid rates and with less risk of faults.

This is due to the fact that there is less exposure on a layer by layer basis compared to a horizontal build, which leads to reduced stress inside the part and thus less failures during production. The reduced exposure time also leads to high part quality and surface quality. By keeping the build envelope and basic process layout of the SLM 500 selective laser melting system, its proven parameters and application guidelines can be carried over, reducing time and risks during part development.

From a practical perspective, the vertical build height of the SLM 800 also reduces the need for supports because of the orientation of the part, reducing post-processing times.

The SLM 800 is better equipped than ever to fulfil industrial-scale production, thanks to a new multi-machine configuration option. The multi-machine setup consists of various elements, including up to five SLM 800 systems, the SLM HUB Automatic Unpacking Station, the Build Cylinder Magazine (BCM) and the Central Powder Supply (CPS) with a portable tank.

The multi-machine printing process benefits from a high-degree of automation: the SLM HUB system offers a sophisticated automated part and powder removal solution, while the build cylinders are designed to be removed from the SLM 800 and transported to the SLM HUB by a linear axis.

In the SLM HUB powder removal chamber, the build cylinder is lifted and the build plate is rotated with vibrations to dislodge the powder, while a downdraft gas prevents dust clouds from forming and recovers powder to be returned to the centralized powder supply.

The CPS only requires two 220 L tanks to provide sufficient centralized powder to up to five SLM 800 printers. The BCM, for its part, can accommodate up to six build cylinders, helping to reduce down time significantly thanks to a pre-heating station and a controlled cooling phase after the build.

The multi-machine setup for the SLM 800 is also modular, meaning that manufacturers can choose from a variety of configurations. For instance, users already using a single SLM 800 with manual unpacking can easily upgrade to using HUB automation, and once two or more machines are connected, users can install the BCM.

It is worth noting that many of the SLM 800’s hardware features, including its gas flow, recoating and multi-laser systems, have been carried over from the company’s flagship 3D printer, the SLM 500. These various technologies, which we’ll elaborate on below, have been extensively tested and proven for the SLM 500, easing the additive manufacturing process substantially and contributing to the system’s reliability. Manufacturers can therefore rely on the fact that the SLM 800 builds upon the same trusted tenets of the SLM 500, only at a larger scale.

SLM Solutions’ gas flow system ensures that the print chamber remains clean throughout. Specifically, it leverages a patented sintered wall technology that pushes a uniform stream of gas through the chamber to keep it clear of soot or other debris without disrupting the laser beam. This is important in build chambers of all size, but the continuous flow of gas throughout a build of this vertical height is of critical importance for the mechanical properties of the material after thousands of layers have already created soot in the chamber.

The printer’s permanent filter module then traps powder and soot particles in a sintered plate filter, which is subsequently purged with gas. The waste material gathered from the process is finally disposed of in a designated bin, while clean gas returns to the process chamber. This cleaning system not only ensures that the build envelope remains uncontaminated, but it is also mostly hands off as it does not require operators to change filter cartridges.

The SLM 800’s recoating system ensures that powder is evenly distributed layer by layer, over thousands of layers. This feature is especially critical for building large-scale parts, where consistency in the powder application is crucial for structurally sound and precise components.

According to SLM Solutions, its unique metal recoater brush is designed for durability and even allows for error correction during the build. For instance, tests demonstrated that the brush remains stable at over 100,000 layers. Further, the system integrates a contingency plan: if the brush does come into contact with an extrusion up to 3 mm from the powder bed, the bristles simply bend without breaking.

It goes without saying that SLM Solutions’ large-format metal AM system has a broad range of applications and is being used in various industries, including aerospace, automotive, tooling, energy and maritime.

Automotive specialist Bugatti, for example, leveraged the SLM 800 to produce a Chiron Cam Cover. The plate featuring eight parts, each measuring 735 mm in height and made from AlSi10Mg, was built in just over four days.

Other parts produced using the SLM 800 by end users include a titanium propeller for the maritime industry, a titanium turbine for the energy sector, an aluminum motor block for the automotive industry and various inconel tooling components.

Bernd Müller, development engineer at SLM Solutions stated: “With the SLM 800 we found a great solution to print tall metal parts in the highest quality. Features like the recoating metal brush and the fully automatic handling station shows the power of innovations of SLM Solutions. We are reacting to the needs of the market to pave the way into automatic series production in future applications. The robustness and the productivity of our machines, especially our large-format offerings as the next-generation of selective laser melting, are also in the forefront of our development activities.