Made In Space, the California-based pioneers of off-world 3D printers, plans to use 3D printing to turn asteroids into autonomous spacecrafts that can potentially fly to mining stations in outer space.

This plan is part of the Reconstituting Asteroids into Mechanical Automata (RAMA) Project, which is funded by NASA’s Innovative Advanced Concepts (NIAC) program. Through the RAMA Project, Made In Space aims to enable space colonization with efficient and economically viable off-world manufacturing, i.e. Microgravity 3D printers.

The concept for the autonomous asteroid spacecraft derives from astronauts becoming less dependant on earthly resources and instead using new and extraterrestrial materials for assistance. In a recent article, James Dunn, Co-Founder and Director of Made In Space stated:

Regolith, the dust and soil layer of material covering rocks found on Earth, Mars, and the Moon, has previously been proposed to be used in off-world construction. This is due to it being a resource of chemical elements and compounds, such as metals and minerals, that are needed to support the fabrication of parts or build structures on planetary surfaces.

Considering this, Made In Space will use a robotic “Seed Craft” to harvest material from space rocks and utilize it as feedstock for construct propulsion, navigation, energy-storage and other key systems onsite alongside 3D printing and other technologies.

Thus, the conversion of near-earth asteroids into autonomous spacecrafts can potentially be programmed to fly to a mining station in Earth or Space, to collect more resources for astronauts in need. 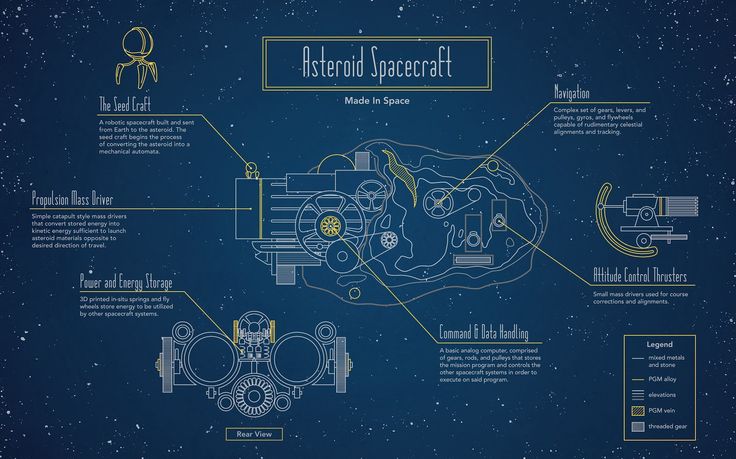 Illustration of the asteroid spacecraft. Image via Made In Space/illustration by Zoe Brinkley.

This plan surpasses previous methods that included launching capture probes to individual space rocks for exploration. Nevertheless, the asteroid spacecraft will not have rocket engines or complex electronic circuitry found on traditional spacecraft; rather its build would be straightforward and mechanical.

“Project RAMA is not starting from scratch. Autonomous 3D printers that use mechanically driven systems already exist, as do mechanical computers made of 3D-printed parts,” added Dunn.

The NIAC program will provide $100,000 for feasibility studies as Made In Space plans to complete and successfully execute an asteroid spacecraft by 2030.

Made in Space gained notoriety for being the first to put 3D printers on the International Space Station (ISS). 3D Printing Industry also interviewed Made In Space on its newly developed Archinaut system – a set of technologies that enable orbital fabrication.

Furthermore, in 2017, Made In Space was awarded a NASA Small Business Innovation Research (SBIR) contract for the development of its Vulcan Hybrid Manufacturing System.

According to Dunn, Made In Space is now counting on NASA to advance in-situ resource utilization (ISRU) technology – the ability to live off certain lands – to further progress the RAMA Project.

Tags: Made In Space