The DFAB HOUSE, a collaborative effort between ETH Zurich researchers and industrial partners, has officially been opened. A real feat for 3D printed architecture, the building was constructed using a range of cutting edge technologies including additive manufacturing, robotics and digital planning.

The DFAB HOUSE, which has been in the works for years, is a three-story home located on the NEST building of Empa and Eawag in Dübendorf—that’s right, on. That is, the house is set on the uppermost platform of NEST, a modular research and innovation building. The smart home will welcome its first residents—academic guests from Empa and Eawag—in about two months.

One of the most eye-grabbing features of the DFAB HOUSE is its intricate ceiling, which was created using a 3D printed formwork. The formwork was produced using a large-scale sand 3D printer from voxeljet which was then cast in concrete to create a ceiling slab that weighs only about half as much as a conventional slab of the same dimensions. The weight reduction was achieved through computational design, which enabled engineers to reduce the ceiling thickness while still maintaining structural integrity. The resulting effect is evocative of an alien spine or, as ETH Zurich says, like something HR Giger might have designed.

The DFAB HOUSE also integrates a curved concrete wall which was assembled by a construction robot and complexly structured wooden frames (also arranged by robots). To top off the smart home, a number of ultra high-tech features, like voice-command window blinds, a multi-stage burglar protection system and intelligent appliances have been included. All these features were installed by a consortium of companies led by digitalSTROM.

“The architectural potential of digital fabrication technologies is immense,” commented Matthias Kohler, ETH Professor of Architecture and Digital Fabrication. “Unfortunately, these technologies are still scarcely used on construction sites. With the DFAB HOUSE, we are able to test new technologies hand in hand with industry and thus accelerate the transfer from research to practice.”

By bringing together experts from ETH Zurich and a number of industrial partners, the DFAB HOUSE demonstrates how new, digital technologies can be applied in truly revolutionary ways to realize real world applications. Crucially, the technologies employed in building the house not only made the construction process more efficient, but also more sustainable. For instance, digitally designed features such as the ceiling and floor were created with weight reduction in mind and utilized less material than their more conventional counterparts. 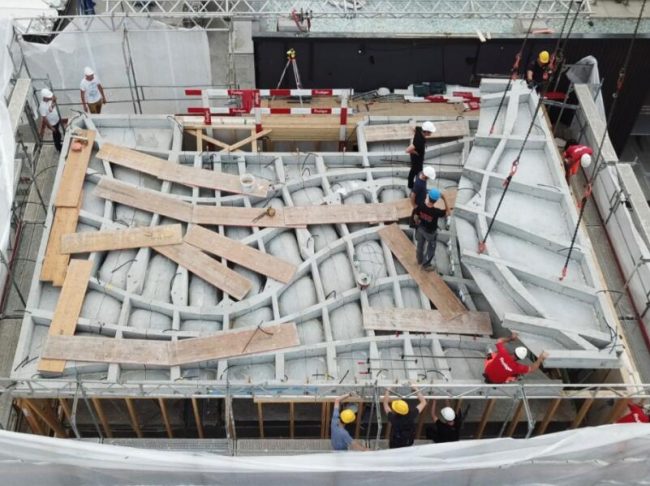 The house also boasts a number of energy-saving features, including photovoltaic modules on the roof, which supply roughly 1.5 times the amount of energy needed for the unit, and an intelligent control system that coordinates all energy consumption and ensures that no load peaks take place. A couple of more experimental additions have been included, such as a system that converts hot waste water from the shower into heat through heat exchangers, and a system that sends hot water back into the boiler when not in use instead of letting it cool in pipes.

“In implementing a construction project like DFAB HOUSE, traditional construction methods meet new concepts of the digital world,” added Gian-Luca Bona, CEO of Empa. “The path from the digital drawing board to an actual building has challenged both scientists and experts from industry. Through a constructive dialog, something truly visionary can now be put into practice; hopefully it will soon be used broadly in the construction industry.”