NextGenAM: Taking Major Steps into the Next Generation of Industrial 3D Printing

One year ago, Premium AEROTEC, Daimler, and EOS jointly initiated the NextGenAM project to develop the basis of a future system for series production using 3D printing technologies. Now, the first pilot plant has been put into operation at Premium AEROTEC in Varel, northern Germany – a key milestone.

Additive manufacturing (AM) is becoming an increasingly important factor in the industry, also with regard to series production. Against this background, the aerostructures supplier Premium AEROTEC, the automotive manufacturer Daimler, and EOS, the leading technology supplier in the field of industrial 3D printing, have joined forces in the NextGenAM project to fundamentally develop the next generation of additive manufacturing. Since the project officially began in May 2017, the NextGenAM team has checked the entire AM process to assess its potential for automation. Now the first pilot plant has been put into operation at Premium AEROTEC’s technology center in Varel.

Goal of the project is to develop a complete production cell capable of manufacturing aluminum components for the automotive and aerospace industries. The purpose- built pilot facility currently consists of various machines for additive manufacturing, post-processing, and quality assurance. The innovation about the production chain is that the individual steps and the interaction of all additive and conventional process steps are fully automated and integrated, and manual steps have been eliminated. As a result, complex, lightweight and at the same time robust components can be manufactured and the high level of automation forms the basis for profitable production going forward.

Center of the pilot production chain is the EOS M 400-4 four-laser system for industrial 3D printing with metal materials. The system is used in combination with the peripheral solutions of the EOS Shared-Modules concept. The EOS M 400-4 in Varel is therefore equipped with a powder station and connected to a stand-alone setup and unpacking station. As a result, filling and emptying the system with the aluminum material, setting up the system to prepare a new build job, and unpacking the built components from the powder bed can be carried out independently of and parallel to the actual AM build process. This significantly increases productivity. The additively manufactured components are transported between the individual stations fully automated and under protective gas in a container on an automated guided vehicle. 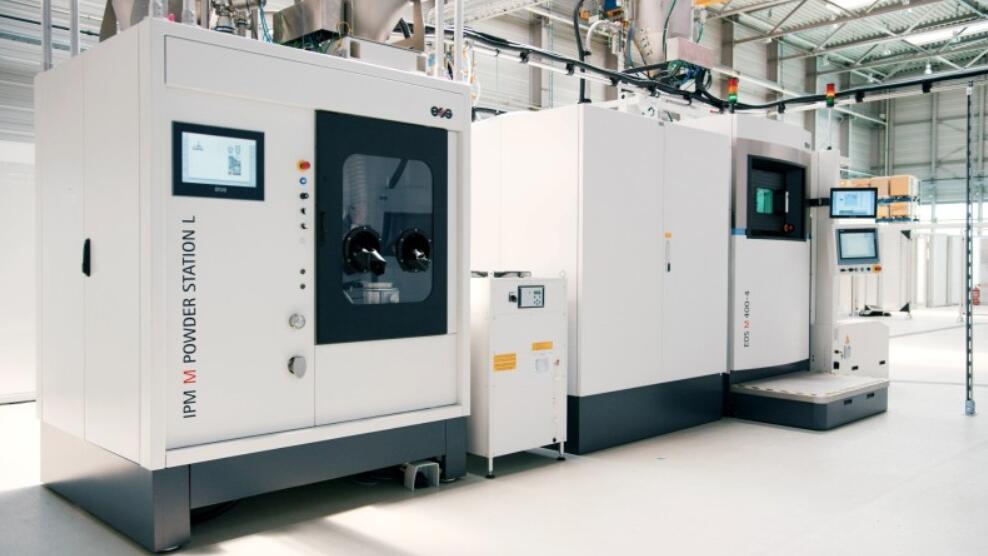 The downstream post-processing has also been extensively automated: A robot takes the build platform with the parts from the setup station and places it in a furnace for subsequent heat treatment. The same robot then removes the platform again and takes it to a three-dimensional optical measurement systemfor quality assurance purposes. Finally, the build platform is conveyed to a saw, which separates the parts from the platform, making the components ready for further use.

Working together to design the future of additive manufacturing in series

The successful development of the automated process chain is the result of fruitful cooperation between all the project partners, each contributing their various skills and experience: EOS is the global technology and quality leader for high-end solutions in the field of industrial 3D printing. Premium AEROTEC was the first manufacturer in the world to supply serial 3D-printed structural components for Airbus aircraft. Up to now, titanium powder has been used as material for this. However, one of the aims of the NextGenAM project is also to qualify aluminum for use. The automotive manufacturer Daimler contributes its experience in the field of mass production – an essential aspect if the pilot plant is to be used to manufacture parts on a large scale.

Dr. Tobias Abeln, Chief Technical Officer (CTO) at EOS, says: “The integration of the AM process in an automated production line is an important milestone for the broad application of our technology in series production scenarios.”

Jasmin Eichler, Daimler AG, Head of Research Future Technologies: “3D printing is well on the way to establishing itself in the automotive sector as an additional manufacturing method with great versatility. With this collaborative pre- development project, we are taking a significant step towards achieving cost- effectiveness in metal 3D printing throughout the process chain. The project lays the cornerstone for the future realization of larger quantities in the automotive series production process – with the same reliability, functionality, longevity, and economy as for components from conventional production.”

In the coming months, the pilot process chain will be further tested at the technology center in Varel and parts of the facility will be audited. In addition, production data will be collected and analyzed with the aim of collating precise data on process times, profitability, and cost optimization. The NextGenAM project is therefore moving continuously closer to its goal of producing highly complex aluminum components in series production in a particularly economical additive manufacturing process.