The $12.9 million Series B financing round announced today was led by G20 Ventures. Other participants in the round include Lincoln Electric and Khosla Ventures, a prior investor. Boeing HorizonX didn’t announce how much it was putting in, but its investments are typically in the multimillion-dollar range. 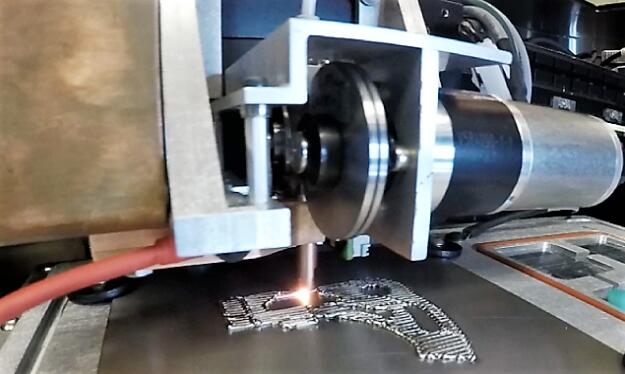 Digital Alloys, which was spun out from NVBots last year, is virtually certain to see its metal 3-D printing technology used to build Boeing aerospace parts.

“Our investment in Digital Alloys will help Boeing produce metal structural aerospace parts faster and at higher volume than ever before,” Brian Schettler, managing director of Boeing HorizonX Ventures, said today in a news release. “By investing in companies with emerging additive manufacturing technologies, we aim to strengthen Boeing’s expertise and help accelerate the design and manufacture of 3-D-printed parts to transform production systems and products.”

“Our novel Joule Printing process is faster, more cost-effective, and more reliable than other approaches,” Digital Alloys CEO Duncan McCallum said. “Partnering with Boeing will make us a smarter, stronger company. We are committed to enabling Boeing and other leading manufacturers to create valuable new products quickly and at less cost by incorporating metal 3-D printing into their production.”

The process can be used for automotive parts and consumer products as well as for aerospace applications.

Boeing already has more than 60,000 3-D-printed parts flying on space, commercial and defense products. Another company in HorizonX’s portfolio, California-based Morf3D, has been producing 3-D-printed aluminum and titanium components for Boeing satellites and helicopters since that startup was founded in late 2015.

HorizonX Ventures was created last year to serve as Boeing’s channel for outside investments in technologies that are relevant to the company’s interests in aerospace, manufacturing and communication, including autonomous systems, augmented reality and machine learning. Last month, Boeing announced that it’s forming yet another business group known as Boeing NeXt to bring together the technologies supported by HorizonX as well as technologies developed in-house by Boeing and its subsidiaries.