The number of 3D-printed parts on board satellites is growing amid advances in additive manufacturing. Satellite shops are embracing the technology to cut costs and accelerate production for increasingly capable spacecraft. Advances are paving the way to a future where satellites can print parts in orbit. But how close is the industry to 3D printing entire satellites? 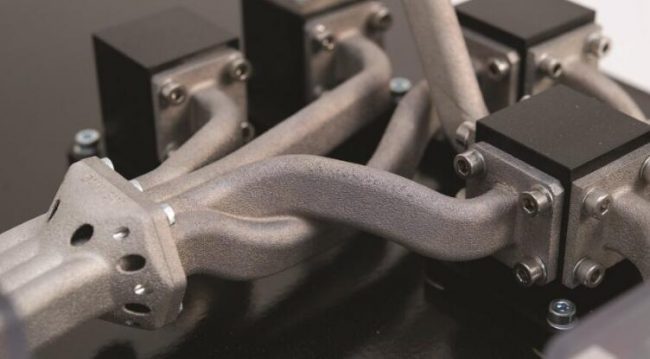 It’s a tricky question, not least because the number of parts on a satellite differs greatly depending on its size and complexity, and range from simple foundational structures to intricate semiconductors.

“Cubesat parts can number in the hundreds of components while larger satellites can range from tens of thousands to hundreds of thousands” for flagship missions such as the just-launched $10 billion James Webb Space Telescope, said Emile de Rijk, CEO of additive manufacturing specialist Swissto12.

But just five years ago, the “use of 3D printed structures was largely experimental with very few parts being flown in missions and payloads that had a healthy risk appetite,” according to de Rijk.

Now, nearly all satellites built today have at least some 3D printed parts, he says, although most are still relatively simple mechanical bracketing systems for keeping a spacecraft’s structure together. The antenna tower for the Hispasat 30W-6 satellite that launched in 2018 was comprised of over 200 additively manufactured parts. Credit: Maxar Technologies

For Maxar Technologies, additively manufactured components have become a standard for all satellites it builds, accounting in 2020 for roughly a third of the components in a typical spacecraft.

The first 3D-printed metal part that Maxar used on a satellite was made of titanium alloy and launched in 2016 on JCSAT-15, a communications satellite built for Sky Perfect JSAT of Japan. Maxar has used parts that were additively manufactured out of aluminum, titanium, and plastic on more than 20 satellites launched since then — totaling 5,800 components on-orbit.

Boeing is looking to grow the capability — in particular for its Millennium Space Systems subsidiary focused on the smallsat market, where 3D printing is proving to be an especially good fit for deploying systems on orbit faster than ever before.

For smallsats, Aston said the company has “demonstrated that 3D-printed buses offer a far faster cycle time for production and are about 30% less costly than traditional bus structures.”

There is “quite a large step” from making simple structures like mechanical brackets to 3D printing thermal management, radio-frequency (RF) and other more complex components on a satellite, de Rijk said.

The semiconductor industry, for instance, has invested hundreds of billions of dollars over the last 40 years to miniaturize increasingly powerful chips that underpin modern technologies.

A lack of satellite standardization is also an obstacle for delivering the economies of scale advantages that 3D printing offers, according to Northern Sky Research analyst Dallas Kasaboski.“It is, for now, mostly a trend for smaller satellites, larger ones have different requirements, and it’s not like 3D-printing a rocket engine, which is probably fairly simple (read: repeatable) while satellites are not yet standardized at a level that could benefit greatly from this,” Kasaboski said via email.

“However, work is continuing to streamline the manufacturing process, so it is possible more hardware will become 3D-printed as we go forward.”

Even for smallsat manufacturers, producing parts with 3D printers can demand a fair amount of intervention from a human operator, potentially increasing costs rather than saving them.

Although some parts of the company’s heritage satellite buses are 3D-printed, Kalabuckas said, “they still form a tiny fraction of the whole architecture.”

The biggest obstacle is cost, he said, because despite improvements, 3D-printed metal parts are prohibitively expensive unless done on a large scale.

“To achieve that, we would be looking at larger constellations with a minimum of a hundred satellites each with many identical parts and the satellite design/ architecture already optimised for 3D printing,” he said via email.

Flight heritage poses another major hurdle because switching to additive manufacturing would require space-qualified parts to be redesigned and then tested in orbit before being put to wider use.

“However, while it’s not a huge cost saver for satellite manufacturing for the time being, we are exploring the area as it might change in the next 5-10 years.”

Centauri 4, the sixth and latest satellite in Fleet Space’s constellation after launching to low Earth orbit in June, has four of these antennas.

According to Fleet Space, which uses its satellites to connect devices in areas beyond the reach of terrestrial networks, the 3D-printed antennas have enabled it to gain 10-times more throughout per kilogram of spacecraft.

In December, shortly after raising over $26 million in a Series B investment round, the startup announced plans for a second-generation constellation that it says would include the first satellites created entirely through 3D printing.

The first small satellites in this upgraded constellation, called Alpha, aim to be ready for launch in 12 months to join the six Centauri cubesats currently in orbit.

“Alpha represents a major step forward and the first time a satellite has been created entirely through 3D-printing,” Fleet Space co-founder and CEO Flavia Tata Nardini said in a statement as part of the announcement.

The plans have attracted skepticism in the space industry, given what 3D printing is currently capable of producing.

“It’s is very unlikely that powerful semiconductors can be 3D printed in the next years to come, so the satellite as such will always have parts non-3D printed,” Swissto12’s Guggenbach said.

However, with about $14 million of investment from South Australia’s local government, Fleet Space said it would create the country’s first dedicated space manufacturing hub in Adelaide to accomplish the feat.

Nardini told SpaceNews that this factory would include several multimillion-dollar 3D printing machines for its bold constellation ambitions.

“We started focusing on the RF elements (antennas, etc.) that are actually much [more] complex to 3D print than anything else (geometry very complex) and we have now a patent on them,” she said through a LinkedIn message.

“Then we have moved to structure, diplexers, and we are now moving to the entire electronics elements.”

The planned semiconductors in Alpha satellites are “not so complex” as the tiniest chips currently on the wider market, she said, but “indeed we are planning some more powerful chips for the future.”

Each Alpha satellite will have up to 64 3D-printed antennas, according to Fleet Space’s Dec. 3 announcement, which said this makes it capable of delivering a 16-fold increase in performance than its most recent Centauri satellite while being only four times heavier.

Technical hurdles that must be cleared to 3D print high-performance satellites in their entirety are sizable, potentially requiring new additive manufacturing processes.

Northern Skies Research’s Kasaboski likened current industrial 3D printing to a 1990s-era printer that prints out a line of text at a time.

“Or, to use another metaphor, like adding layers of frosting to a cake,” he said. “Material is processed in the printer, and laid in strips back and forth, over and over. Other methods exist, but they amount to a similar conclusion.

“So, you can print structures, unique shapes, making molds and models, but you generally cannot print working ‘things.’ If you use special material, you could print something that is electrically or magnetically conductive or something, but that’s far different from printing a working photovoltaic cell.”

However, the allure of potentially being able to autonomously build satellites in orbit one day will likely continue to attract investments for those looking to push the limits of what is possible.

On Earth, manufacturers layer material on top of itself because of gravity. In space, a satellite could potentially be built from the inside out, where the first few drops of material are at the very center and expand outward while rotating.

“Theoretically, it could be very interesting, but in terms of application, there haven’t been many compelling use cases here yet,” Kasaboski added.

“Plus, the tech is not fully standardized/ proven on the ground, let alone in orbit.”

This article originally appeared in the January 2022 issue of SpaceNews magazine.