Orion Gets a Lift from Electro-Static Dissipative (ESD) Material

“Going back throughout the history of 3D printing it’s been ‘Let’s find materials that print well,’ and then ‘How can we use them?’” says Scott Sevcik, vice president of manufacturing solutions for Stratasys. But in bringing 3D printing into production applications, he says the company has learned that “we can’t start with ‘What material works for us?’ We have to start with ‘What are the properties our customer needs?’” 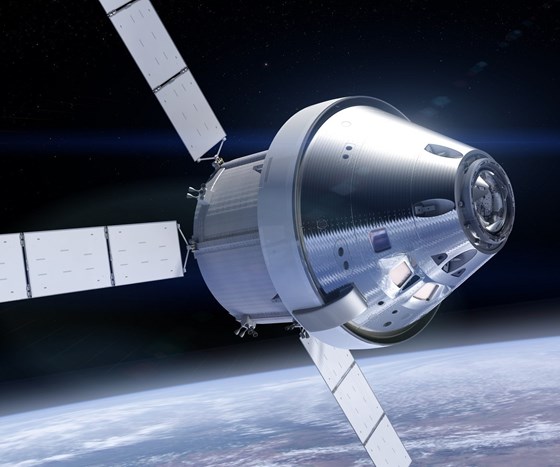 That approach was carried to the extreme in the recent development of Antero 800NA, a PEKK-based filament for Stratasys fused deposition modeling (FDM) printers that will be used in parts for NASA’s Orion deep-space spacecraft. Whereas in the past the company might have developed the material based on the capabilities of the printer, Antero was developed based on the printer parameters plus very specific application requirements—requirements coming from NASA and its subcontractors, including Lockheed Martin.

In late 2015, Stratasys received a request from NASA’s Goddard Space Flight Center regarding its Ultem 9085, a high-performance material popular for aerospace applications. NASA liked the filament, but wanted a variant with electro-static dissipative (ESD) properties for a satellite application.

ESD materials are those that conduct, and can therefore dissipate, electrical charges. In space, static electricity can build up more readily than in the earth’s atmosphere. “There is nowhere for that charge to go other than to create a spark, and that damages electronics,” Sevcik says. “A little spark can cause millions of dollars’ worth of damage.” The risk is greater with polymer parts than with metal, so one way that NASA contractors had found to meet the ESD requirements was to 3D print parts from the Ultem material and have them plated. But, this secondary step was time-consuming and labor-intensive.

That request from Goddard is what first sparked the development of Antero as a custom material. Several years later, Sevcik heard the same request echoed by both NASA Johnson Space Flight Center, the program office for Orion, and Lockheed Martin, a contractor on the project. “They asked us almost word-for-word the same question that we had with Goddard a couple years before,” he says. At that point, he was able to say, “We have a material in process here that we think would meet your needs quite well.”

In addition to ESD properties, those needs also included strength and chemical resistance.  “They needed a stronger material than ABS that didn’t outgas,” says Norman Stucker, general manager – Colorado for Phoenix Analysis & Design Technologies (PADT), which provides regular support to Lockheed Martin. A further requirement: The material would be a filament that could be processed in Stratasys’ Fortus line of FDM 3D printers.

To develop such a material, Stratasys first experimented with incorporating ESD capabilities into the filament NASA already liked: Ultem 9085. However, it quickly became clear that this would not be the best course of action. “We saw that we could get much better performance if we were working in a different resin,” Sevcik says. The strategy shifted from altering Ultem 9085 to creating a material that would match its performance while imparting the additional values of ESD properties and chemical resistance. It was a matter of “Starting with ‘What are the functional properties required?’ and then developing our compounding strategy to create the material that’s going to provide those properties,” Sevcik says.

To achieve chemical resistance, Stratasys selected PEKK as the base resin, a first for the company’s catalog of FDM filaments. “We knew with a PEKK-based material we would be able to survive in more extreme environments because it can be exposed to pretty much anything without degrading the strength of the material,” Sevcik says, pointing out the resin’s ability to maintain performance even under exposure to fuels, hydraulic fluids and other substances that can degrade Ultem over long-term exposure.

PEKK also has the advantage of being a semicrystalline polymer. “If you look back at different technologies within 3D printing, historically FDM has been thought of as using amorphous thermoplastics,” Sevcik says. In the case of filaments for FDM, amorphous materials have a fluid glass transition enabling near-isotropic properties. “It’s a material you can melt, you can remelt—and it will have very consistent, regular thermoplastic characteristics,” Sevcik says.

Meanwhile, “the powder bed systems like SLS systems have used semicrystalline materials like nylons that have a different microstructure,” he says. Semicrystalline polymers have molecular chains that are partially aligned to form crystalline sections interspersed with amorphous areas, making the materials stronger and stiffer than purely amorphous polymers. This microstructure also means that the semicrystalline polymers don’t exhibit a clear glass transition, making them more difficult to print as filament. It has only been in the last several years that semicrystalline materials that are traditionally thought of as powder-bed materials, like PEKK and nylon, have been introduced for the FDM process, Sevcik says.

“This is a different family of thermoplastics, which actually allows us to do some very interesting things with some high-temperature applications,” Sevcik says. Amorphous materials are limited by the heat deflection temperature (HDT), so that above the HDT, they experience a rapid drop in mechanical properties such as stiffness. But because of the microstructure developed in a semicrystalline polymer, its mechanical properties degrade much less quickly, enabling use temperatures in excess of the HDT for a period of time.

Because its base is semicrystalline PEKK, “The Antero material can actually withstand temperatures above what would normally be considered its glass transition or its melting temperature,” Sevcik says. “We can gain higher use temperatures out of this material, in addition to the strength and chemical resistance.”

“You can only optimize the hardware and print parameters so far, so to ensure high repeatability and good part quality, we needed to also optimize the material itself.”

Finally, Stratasys had to find a way to impart ESD characteristics into the PEKK resin. The key is “to ensure that there is a level of conductivity with the material so that the charge is able to dissipate naturally through the structure,” without being too insulative, Sevcik says. Carbon nanotubes were incorporated with the PEKK resin to provide electrical conductivity. Adjusting the amount of carbon nanotube fill enabled the developers to dial in the exact ESD properties necessary.

Because Antero 800NA was developed with Stratasys Fortus systems in mind, 3D printing with it proved to be no difficulty. “You can only optimize the hardware and print parameters so far, so to ensure high repeatability and good part quality, we needed to also optimize the material itself,” Sevcik says. “We were able to really work on the material side to ensure that we had a good solution with our existing products.”

Confidence in the material as well as the machine is critical for 3D-printed production parts, especially those destined for space. Antero 800NA underwent a rigorous testing plan with NASA and Lockheed Martin that included tests of outgassing, burning, chemical exposure and electro-static dissipation. “There was a lot that needed to be done to ensure that they were going to have the repeatability, the performance and the part quality that they could have high confidence in when we’re talking about a high-profile crewed spaceflight program,” Sevcik says.

Lockheed Martin has already leveraged Antero to build a critical assembly for the Orion, a ring of six 3D -printed components that will lock together on the outside of the spacecraft’s docking hatch. More than 100 3D-printed parts, many of them made from the new Antero material, are expected to be part of the final craft.

“Lockheed Martin was not necessarily looking for all the additional strengths and benefits of Antero,” Stucker says, “but when they received the material, they were excited by the performance, and are now actively looking at other applications beyond just the Orion application.”

For the development of this material, communication and partnership were key. “We were in regular consultation with Lockheed Martin as well as with NASA and the broader aerospace community, so we had an opportunity to really understand what they found lacking in the existing 3D printing capabilities,” Sevcik says. “We were able to address that directly because of the relationships and collaboration between Lockheed Martin and PADT, and Stratasys and Lockheed Martin, and Stratasys and NASA. This network of connection means that we’re able to really zero in on a pain point and help them address it.”