Researchers at the Swiss Federal Laboratories for Materials Science and Technology (EMPA) have used 3D printing to create a sustainable new class of supercapacitors. The fully-3D printed battery, composed of a flexible cellulose and glycerol substrate, patterned with conductive carbon and graphite-laden ink, is able to withstand thousands of charging cycles while maintaining its capacity. Thanks to its biodegradable base, the novel cell can also be composted once finished with, potentially making it an ideal tool for tackling the world’s electronic waste issues. According to the EMPA scientists, the recent boom in electronic wearables, packaging, and Internet of Things (IoT) applications, has seen the global number of these devices rise to 27 billion. However, given their short life cycle, and the fact they tend to be powered by non-renewable lithium-ion or alkaline cells, many such products will eventually be landfilled, worsening the global ‘e-waste’ problem. The researchers’ findings are detailed in their paper titled “Fully 3D Printed and Disposable Paper Supercapacitors”. 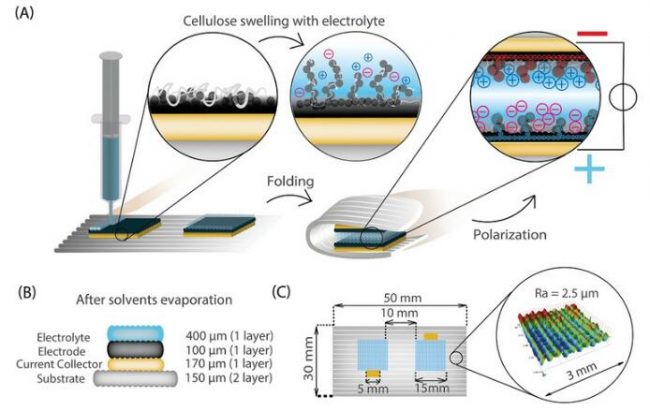 In an effort to develop more eco-friendly energy storage devices, scientists have therefore begun to experiment with electrical double-layer capacitors, or ‘EDLCs.’ These high-capacity, fast-charging supercapacitors can at least partially be manufactured from biodegradable materials, potentially making them an ideal replacement for normal batteries, which often require specialized disposal services.

Although a significant amount of research has gone into EDLC R&D, their varying parts such as electrodes and current collectors can be difficult to produce via a single manufacturing process. What’s more, many prototype EDLCs are partially-3D printed at most, necessitating their time-consuming and expensive assembly or post-processing, which makes them unattractive as commercial ventures.

To streamline EDLC production and create an eco-friendly battery of their own, the EMPA team turned to DIW 3D printing, which they used to manufacture two half cells before folding them together. In practice, this meant printing the unit’s substrate base first, then depositing its electrode and conductive graphite-infused electrolyte layers on top, in a process that after some tweaking, yielded a functional battery. 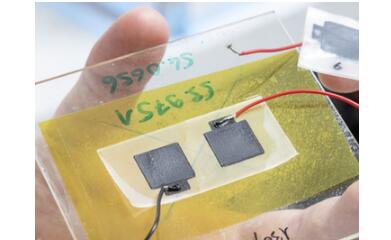 “It sounds quite simple, but it wasn’t at all,” said Xavier Aeby of EMPA’s Cellulose & Wood Materials lab. “It took an extended series of tests until all the parameters were right until all the components flowed reliably from the printer and the capacitor worked.” He added, “As researchers, we don’t want to just fiddle about, we also want to understand what’s happening inside our materials.”

Once their supercapacitor prototype was ready, the scientists sought to test its charge retention by charging it to 0.5 V, before measuring its open surface voltage. According to the researchers, their device still had 30% of its charge remaining after 150 hours, putting its performance “in line with that of state-of-the-art carbon-based supercapacitors.”

Interestingly, the researchers found that the capacity of their supercapacitor also fluctuated for two weeks after fabrication then settled, while it later remained functional after eight months in storage, and when they had finished their experiments and attempted to compost it, they were able to dissolve around 50% of its mass over the course of nine weeks. During testing, the team’s device was ultimately capable of powering a 3V alarm clock under mechanical stress, as well as operating at wildly varying temperatures. As a result, with further R&D, they say it could be deployed on a wider scale, to sustainably power low-voltage smart devices such as those used within environmental monitoring, e-textiles, or healthcare applications. 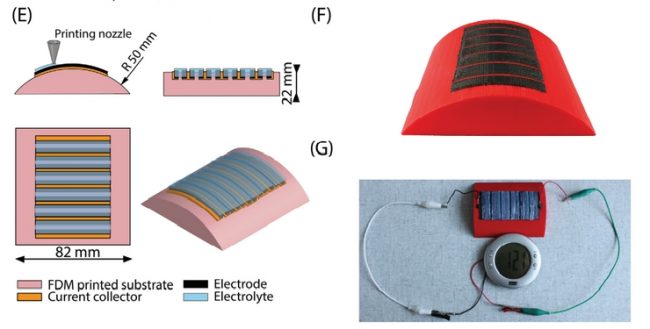