In total hip replacement surgery, most traditional designs of femur components have a long stem. Short hip stems have only recently been introduced, and these are presumed to reduce proximal stress shielding compared to traditional, long stems. However, due to their smaller contact area with the bone, high peak stresses and areas of stress shielding could appear in the proximal femur, especially in the presence of atypical bone geometries. Researchers at the University of Leuven and University Hospital of Brussels wanted to better understand this aspect by virtually implanting a commercially available calcar-guided short stem (Optimys from Mathys AG, Bettlach, Germany) in a series of bones with deviating proximal geometry, and by performing finite element analyses. However, to investigate a wide range of femurs, a large number of finite element models had to be created. As this is time-consuming and labor-intensive work, it introduced the need for an automated methodology that would allow the team to assess the implant’s performance. 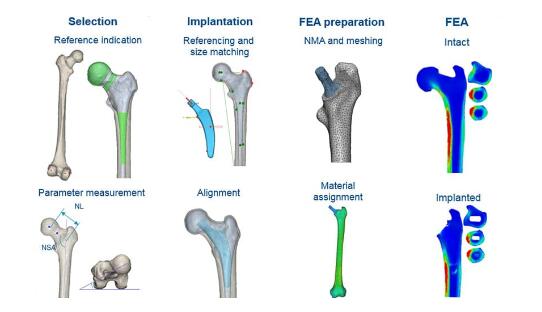 To generate accurate surface and volume meshes, create the necessary assemblies, and assign material properties based on the medical image data in an automated way, the team turned to the Python Scripting and FEA capabilities in the Mimics Innovation Suite. The workflow is shown in Figure 1. To select the femurs to be used in the study, the neck-shaft angle (NSA), neck-length (NL) and anteversion (AV) were determined three-dimensionally from a CT dataset of 96 segmented femurs. The 12 most extreme and six ‘average’ femurs from this dataset were selected (18 femurs). Then, the CAD design files of the implant were automatically sized and aligned to restore the anatomical hip rotation center. The stem size and position were manually corrected by an orthopedic surgeon where needed to achieve the optimal biomechanics for each femur (Figure 2).

After making the virtual osteotomy cut (Figure 3), finite element models were constructed using a non-manifold assembly approach (Figure 4). Material properties were estimated from the CT dataset and loads representing walking and stair climbing were applied in Abaqus [1]. Stress-shielding was evaluated by the change in average strain energy density pre- and post-operatively in three different regions (calcar, midstem, tip), with each being subdivided in four quarters (medial, lateral, anterior, posterior) (Figure 5).

The Role of the Scripting and FEA Modules in This Study

The automated workflow that the researchers developed in this study was a great help, as it allowed the team to: