Microlaunchers are an alternative to conventional launch vehicles. Able to carry payloads of up to 350 kilograms, these midsized transport systems are designed to launch small satellites into space. Researchers at the Fraunhofer Institute for Material and Beam Technology IWS in Dresden and TU Dresden’s aerospace experts developed an additively manufactured rocket engine with an aerospike nozzle for microlaunchers. The scaled metal prototype is expected to consume 30 percent less fuel than conventional engines. It will feature prominently at the Hannover Messe Preview on February 12 and in the showcase at booth C18 in hall 16 at the Hannover Messe from April 20 through 24, 2020. 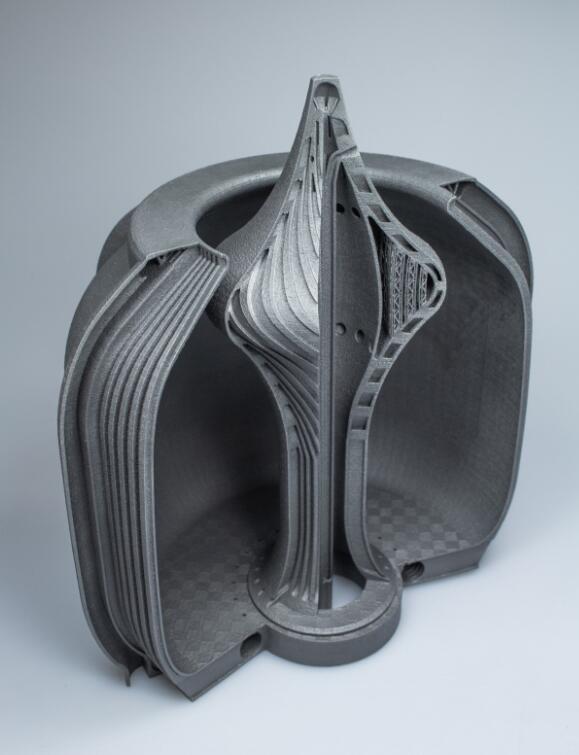 A design demonstrator for an additively manufactured aerospike nozzle. Image via Fraunhofer

The market for small satellites is sure to boom in the years ahead. The United Kingdom aims to build a spaceport in the north of Scotland, the first on European soil. The Federation of German Industries (BDI) has also endorsed the idea of a national space-port. It is to serve as the pad for small-to-midsized launchers that haul research instruments and small satellites into space. These microlaunchers are engineered to carry a payload of up to 350 kilograms. Aerospike engines are an efficient means of powering these microlaunchers. They offer the welcome prospects of far less mass and far lower fuel consumption. A research team from Fraunhofer IWS and TU Dresden’s Institute of Aerospace Engineering developed, manufactured and tested an aerospike engine over the past two years. The German Federal Ministry of Education and Research (BMBF) funded the project. What sets this aerospike engine apart from others is that its fuel injector, combustion chamber and nozzle are printed layer by layer in an additive manufacturing process called laser powder bed fusion (L-PBF). The nozzle consists of a spike-like center-body designed to accelerate combustion gases.

“The technology behind aerospike engines dates back to the 1960s. But our ability to produce engines as efficient as this is owed to the freedom brought by additive manu-facturing and its embedding in conventional process chains,” says Michael Müller, scientific assistant at the Additive Manufacturing Center Dresden (AMCD), which is jointly operated by Fraunhofer IWS and TU Dresden. Aerospike rocket engines promise fuel savings of around 30 percent over conventional rockets. They are also more com-pact than conventional systems, which reduces the overall system’s mass. “Every gram saved is worth its weight in gold in space flight because less fuel has to be taken into orbit. The heavier the overall system, the lighter its payload has to be,” says Mirko Riede, group manager 3D manufacturing at Fraunhofer IWS and colleague of Michael Müller. The aerospike nozzle developed by Fraunhofer IWS and TU Dresden better adapts to the changing pressure on the trip from Earth to orbit. This makes it more efficient, so it burns less fuel than conventional engines.

“We opted for an additive way of manufacturing the metal rocket because the engine requires very good cooling and needs internal cooling channels. This complex regenerative cooling system with labyrinthine internal ducts cannot be milled or cast in conventional ways,” says Riede. Applied layer by layer, the powder is then melted. This selective laser melting gradually builds a component with one-millimeter-wide cooling channels that follow the combustion chamber’s contours. Residual powder in the channels is then vacuumed out. This metal has to hold up to rigorous demands, remaining solid at high temperatures and conducting heat well to ensure optimum cooling. “Temperatures of several thousand degrees Celsius prevail in the combustion chamber, so this does require active cooling,” says Müller. 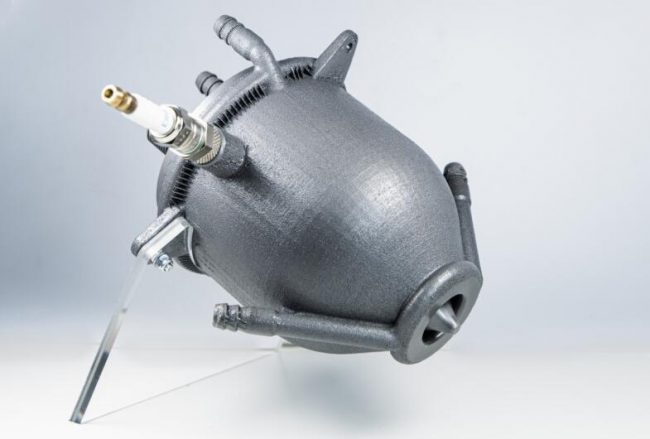 This prototype of the aerospike engine has already been tested by the Dresden researchers on the test stand of the Institute of Aerospace Engineering of TU Dresden. Image via Fraunhofer

Scientists at Fraunhofer IWS and TU Dresden are looking to the injection system in a bid to further boost engine efficiency. Called CFDμSAT, this project has been underway since January 2020 with the Ariane Group and Siemens AG taking part as associated partners. Injectors pose major design and manufacturing challenges. “Fuels first serve to cool the engine. They heat up and are then induced into the combustion chamber. Liquid oxygen and ethanol are added separately to be blended via an injector. The resulting gas mixture is ignited. It expands in the combustion chamber and then flows through a gap in the combustion chamber to be decompressed and accelerated by the nozzle,” notes Müller, explaining how this engine produces thrust.

The Dresden-based researchers have already tested the prototype of the aerospike engine in a test cell at TU Dresden’s Institute of Aerospace Engineering, achieving a burn time of 30 seconds. “This process is special because there have been scant few precedents for aerospike nozzles tests. We have proven that a working liquid- propellant jet engine can be produced by way of additive manufacturing,” says Müller.

This project is one example of the close collaboration between the TU Dresden and non-university research institutes within a science cluster called the DRESDEN-concept. TU Dresden is responsible for the engine’s design and layout; Fraunhofer IWS for the manufacturing and material validation. Their first step was to adapt the design to the additive manufacturing process. The researchers then selected and characterized the material. Next, they produced the engine’s two components with the L-PBF method and reworked their functional surfaces. The components were joined by laser welding and a computed tomography scanner inspected for pores and other defects. This non-destructive evaluation can also determine if sintered powder is obstructing the cooling channels. This project demonstrates how AM processes can be integrated into today’s process chains in a productive way across all industries to advance the state of the art in manufacturing.