Aston Martin’s third midengine hypercar, formerly known as Project 003, will henceforth be known as AM-RB 003. Basically, the Valkyrie was 001 and the Valkyrie AMR Pro (because the 1,160-hp base car wasn’t enough) was 002. It made its world premiere this week at the Geneva auto show. 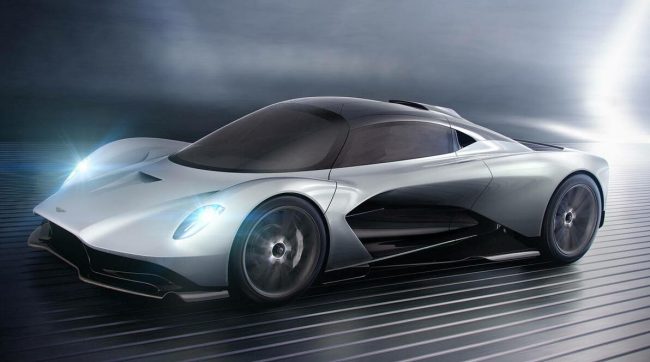 Like Aston’s other limited-edition, midengine cars, the aero technology behind it is staggering. It shares its styling and aerodynamic philosophy with the Valkyrie, using “next-generation aircraft morphing technology, to create a variable airfoil across the entirety of the rear wing.” The technology is called FlexFoil and it “allows for the car’s downforce to be changed without changing the physical angle of the entire element.” The surface, according to the makers of FlexFoil, can deform from negative-9 to 40 degrees without the normal mechanics of conventional wing assemblies. It reduces turbulence, improves efficiency and reduces noise.

The AM-RB 003 will be slightly more road-going than the Valkyrie, hence it “makes greater concessions to usability and comfort. The doors, like an LMP car, open forward and take some of the roof with them, to ease getting in and out. The center console is also wider than the Valkyrie’s, and luggage space “is provided via a terrace behind the seats.” Aston says it focused on “apex ergonomics,” which means the center of the driver’s back, steering wheel and pedals all line up perfectly. That may seem silly, but if you get in a car that’s not lined up properly, you’ll notice right away. The “squircle” wheel offers a better view of the display cluster mounted behind.

The large, wraparound band separates the upper and lower portions of the cockpit and features recessed vertical fins that provide audio, ventilation and ambient lighting. Much of it is 3D-printed, says Aston, to save weight — the center console has 50 percent less mass; with the addition of CAD modeling, it’s possible to make super-intricate shapes.

We don’t have a lot of powertrain info at the moment, but we do know it will house a midmounted twin-turbo hybrid V6 designed in-house. The powerplant will come with a new sealed oil system that enables 90-second oil changes. It will be a world first for a road-going car.

The carbon-fiber structure was honed by Red Bull Advance Technologies, while the AM-RB 003’s active suspension and electronics will “deliver a chassis blessed with next-level precision, control and driver connection.” “When Aston Martin secured the services of Red Bull Advanced Technologies to embark on the extraordinary journey that became Aston Martin Valkyrie and Aston Martin Valkyrie AMR Pro, it was always my hope that it would lead to a long-term collaboration,” said Andy Palmer, Aston Martin Lagonda president and group CEO. “It gives me tremendous satisfaction to confirm that this exceptional partnership is continuing with the AM-RB 003.”