In response to the growing use of composites across industries, Stratasys is now shipping an affordably priced additive manufacturing system dedicated for carbon-fiber-filled Nylon 12. The Fortus 380mc Carbon Fiber Edition, previewed at RAPID 2018, is an industrial quality system that is being offered at $70,000 in the US. It began shipping last week.

Recently composite material has seen a year-over-year market growth between 8 to 12 percent. Carbon fiber composite applications and carbon fiber reinforced polymers are considered clean energy technologies by the U.S. Department of Energy because they enable “light-weighting,” which reduces energy consumption. It’s estimated that each ten percent reduction in vehicle mass drives a six to eight percent increase in fuel economy.

Stratasys was one of the first to offer a carbon fiber filled composite for additive, but it previously offered the material only on high-end production 3D printers in the $200K-$350K range. “Our customers are pushing us for easier access to carbon fiber,” says Stratasys Senior Vice President of Sales, Pat Carey. “They’ve told us they want an affordable solution but in a reliable, industrial-quality system. So we’re now offering a more accessible system that’s based on our Fortus 380mc platform. Because the 380mc CFE is dedicated only to carbon-fiber-filled Nylon 12 and one other material, we’re able to currently offer it at the lowest price for any of our industrial printers.”

For both its IndyCar and NASCAR race cars, Team Penske uses FDM to produce prototypes and end-use parts from carbon-fiber-filled Nylon 12 composite material. 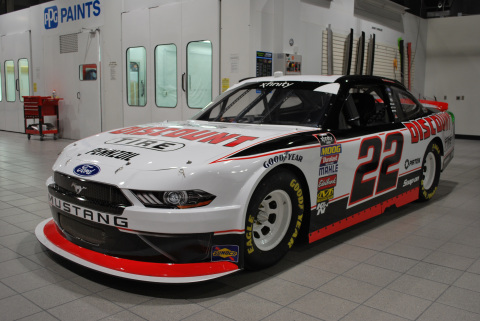 The team recently used the composite to produce a mirror housing for its NASCAR race teams. After designing the mirror housing, engineers then customized the design for each of their Cup Series drivers before building the final parts from the composite via FDM. Team Penske used carbon-fiber-filled Nylon 12 to produce side view mirrors customized for each of their Cup Series drivers (Photo: Stratasys)

The carbon-fiber-based material enabled Team Penske to produce lightweight mirror housings with high impact resistance and high stiffness, each of which is critical in motorsports. The composite’s stiffness is especially beneficial when making thin-walled parts, so the parts won’t flex under the aerodynamic loads produced on track.

Additive applications for carbon-fiber-filled Nylon 12 may include:

Stratasys expects the quickest adopters of its Fortus 380mc CFE 3D Printer to be those making tooling and fixtures and those in industries that include Automotive; Recreational Sporting Equipment; Marine; Orthosis and Prosthesis; Defense; Aerospace; Medical Equipment; Oil and Gas.

The Fortus 380mc CFE is based on a proven platform that produces parts with repeatable dimensional accuracy. Parts don’t exhibit appreciable warpage or shrinkage and will hold to a tight tolerance. Stratasys Nylon 12CF is up to four times stronger than a competitively priced alternative in the X and Y axis, and it will maintain its mechanical properties at a 40 percent higher temperature. The Fortus 380mc CFE is between two and five times faster than the competitively priced carbon-fiber-based 3D printer.

The Fortus 380mc CFE builds parts in 0.010 in. (0.254 mm) layer thickness. The system is also compatible with ASA thermoplastic, for which is can build in either 0.010 or .005 in. (0.127 mm) layer thicknesses. The 3D printer’s build chamber measures 14 x 12 x 12 in. (355 x 305 x 305 mm). It offers water-soluble support material removal, which eliminates the need for manual labor to remove the supports. This in turn allows the creation of fine and intricate geometries, which wouldn’t be possible without the soluble support material, because the fine features could be destroyed during cleaning, or intricate geometries might be too laborious or impossible to remove the support material.

The Fortus 380mc Carbon Fiber Edition 3D Printer and a Team Penske NASCAR race car will be on display at the Stratasys IMTS booth # 431600 September 10 — 15 at Chicago’s McCormick Place.