Decades ago, the world of diagnostic single-exposure X-rays was supplemented with the layer-by-layer, 3D density details generated by microscale X-ray computed tomography (microCT) imaging. Just as engineers have long used standard X-rays to examine the internal structure of traditionally manufactured parts, developers and quality assurance groups have more recently applied the deeper capabilities of microCT to parts produced by additive manufacturing (AM).

Impeller with 5 cm diameter printed in 17-4 stainless steel. The internal and external surfaces identified in the microCT scan are rendered at right. The full part was scanned in 3.5 hours, with 43 μm voxels. The colored inset depicts the region analyzed for surface roughness using an internal microCT scan taking 1.5 hours to complete with 15 μm voxels.

One of the many benefits of metal AM is the ability to produce internal structures. Parts must not only meet dimensional specs but also display consistent and acceptable quality characteristics, such as high density and the absence of internal defects. MicroCT is a powerful tool for these and other AM applications, too, as described in a recent paper by Anton du Plessis et al, “X-Ray Microcomputed Tomography in Additive Manufacturing: A Review of the Current Technology and Applications” (Anton du Plessis, Igor Yadroitsev, Ina Yadroitsava, and Stephan G. Le Roux, 3D Printing and Additive Manufacturing; July 30, 2018). The paper offers worthwhile reading and includes a table comparing the types of microCT scan approaches/capabilities and corresponding time investment needed for a given evaluation goal.

Non-Destructive Inspection from Powder to Part
While prototype and sample parts can always be physically sliced (destroyed) and imaged to expose internal details (which may be fine for plastic AM parts), non-destructive inspection is highly desirable for qualifying and verifying aerospace, automotive and medical final products. 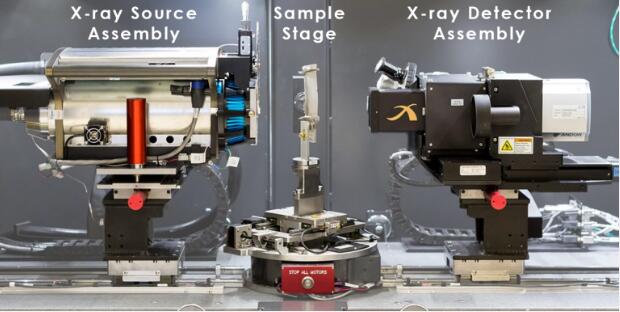 Internal components of a Zeiss Xradia 520 Versa, property of the Multi-Scale Additive Manufacturing Lab of the University of Waterloo. X-rays are emitted in a cone beam from the X-ray Source Assembly and travel through the Sample to the X-ray Detector to collect a 2D radiograph. The Sample is incrementally rotated through 180° or 360° to collect several hundred to several thousand radiographs, which are reconstructed into a 3D image.

MicroCT systems employ either a fan-beam or cone-beam approach to transmit X-rays through a part. Typically, the part (rather than the source) is moved incrementally on a rotary table, capturing hundreds or thousands of radiographs over a 180° or 360° rotation. Data from either type of scanner is collected at a planar detector and then processed to create 3D volume reconstructions, which can be analyzed and viewed layer by layer. Different densities of material show up as different gray shades across the images, generally capturing details down to three microns, with some high-resolution microCT scanners comfortably imaging down to 0.5-micron voxel size. MicroCT equipment can inspect metals ranging from aluminum and titanium to heavier alloys such as stainless steel and Inconel, primarily depending on the energy of the X-rays emitted by the source.

The video shows a MicroCT scan of metal additive manufacturing feedstock powder. Scan duration was 2 hours at 2 μm voxel size. Generally, tens of thousands of particles are imaged in a single scan, and statistics on foreign particle contamination as well as particle size, shape, and porosity can be determined.

The applicability of microCT spans a large part of the overall AM process including characterization of feedstock powders, optimization of build process parameters, and inspection of as-printed or post-processed parts. With powders, microCT image data can be used to detect foreign particle contaminants as well as measure particle size and shape distributions and detect porosity internal to particles.

Metal feedstock powder for additive manufacturing can be scanned using microCT and characterized in terms of particle size, shape, and porosity. A single 100 μm diameter particle is extracted from a microCT scan of several thousand particles and rendered in this animation.

Build process parameter optimization can be accomplished by a systematic study of the effect of different parameter settings on a desired metric (porosity, surface finish, etc.) measured on carefully designed test coupons tailored for microCT inspection. For as-printed or post-processed parts, a wide range of measurements can be made including those for surface and dimensional metrology or for the size, shape, and spatial distribution of internal voids.

The main drawbacks to wider use of microCT within AM include cost and lack of standards (per article by Du Plessis et al). However, with careful application it can be a powerful tool to accelerate process development, leading to shorter timelines and cost savings compared to conventional approaches. Work on creating standards has included guidelines on how to seed natural flaws into test parts and therefore demonstrate ability to detect these flaws. There is also much discussion of pros/cons of test coupons: standard parts such as 10mm cubes or 15mm-diameter cylinders may vary due to build orientation and build parameters, yet higher resolution imaging is possible on smaller test parts.