Transmitting high power from a small lightweight package is one of the chief benefits of hydraulics. And there aren’t many applications where this is more important than with equipment that must be carried manually. That’s why Jaws of Life and other high-power tools rely on hydraulic systems operating at high pressure to so they can be carried to the point of use, fit into tight quarters, yet still produce force measured in tons for lifting, crushing or torque for twisting. 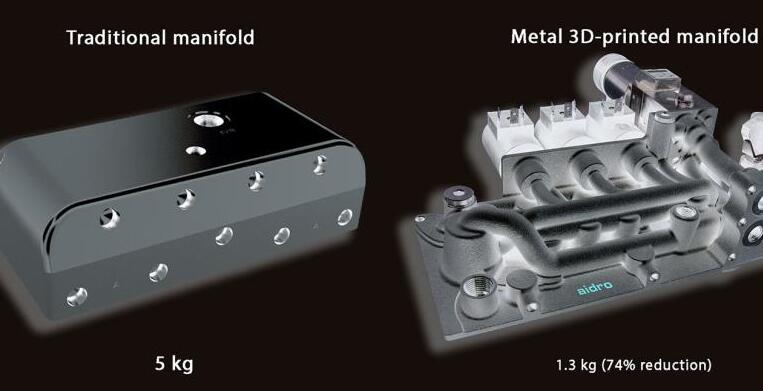 That’s the casewith a manufacturer of a portable hydraulic power for high-pressure, portable hydraulic power tools. Designers wanted to make the power unit as light as possible, but it seemed as if everything had been done. Integrated hydraulic circuits using cartridge valves were specified in lieu of line-mounted valves, the number of components was reduced to a minimum, and fluid lines were made as short as possible. Then designers discovered the latest capabilities of metal 3D printing. 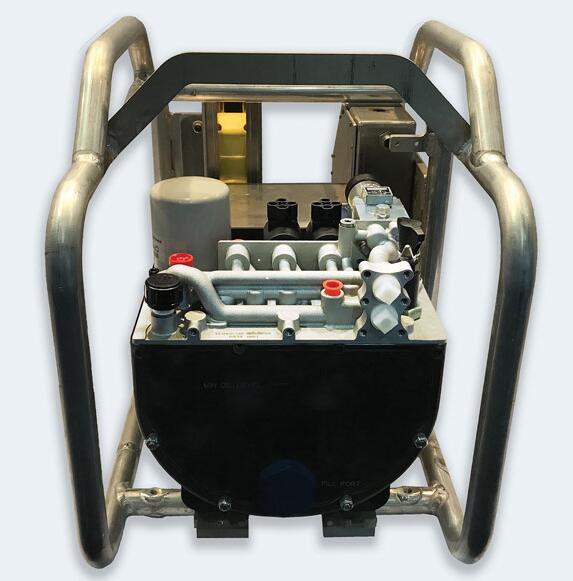 This portable hydraulic power unit is used for supplying high-power hydraulic. Because it is manually carried to work sites, designers wanted to make it as light as possible. After adopting several design changes to make the HPU lighter, they specified a metal 3D printed manifold that weighs about one-fourth that of an equivalent conventional manifold. (Image courtesy of Aidro SrL.)

Metal 3D-printed components are not new, but until recently, material strength needed to accommodate high pressures kept hydraulics tapping into this technology. Metal 3D printing is often associated with additive manufacturing. Additive manufacturing involves beginning with nothing and adding only enough metal to make the component that meets dimensional, physical, and mechanical properties.

Components made using metal 3D printing can be smaller and, especially, lighter than equivalent components made by conventional methods. At left is a manifold that had been used in a portable power unit, and at right is the 3D-printed version, which weighs 74% less. (Image courtesy of Aidro SrL.)

This is in contrast to machinedcomponents, where the component (typically a manifold) begins as a solid block of metal, and the materialis removed to meet requirements. The limitation to this technology is that excess material usually is left in place to save the expense of removing it, resulting in parts that weigh more than necessary. Much of the excess metal could be removed to reduce weight, but doing so would add substantial manufacturing cost that rarely can be justified by the relatively small weight reduction.

Machining also is limited toproducing many desired configurations, such as oval-shaped or squared-off fluid channels that can carry the same flow as a round channel, but in less space. Passageways in conventional manifolds often must be positioned to prevent cross-drilled channels from intersecting and allow enough material between channels to provide adequate strength. Auxiliary holes drilled to connect internal passageways usually must to be plugged to prevent cross-channel flow.

Metal 3D printing in a nutshell

Metal 3D printed components buildup the desired component layer by layer. The process uses a computer-controlled laser to melt each layer of metal as it is deposited to build up the part. According to Alberto Tacconelli, Managing Director at Aidro SrL, Taino, Italy, the most appropriate type of metal 3D printing for hydraulic components is powder bed fusion, either by direct metal laser sintering (DMLS) or selective laser melting (SLM).

DMLS heats the metal powder to the point that particles fuse together on a molecular level. The porosity of the sintered material is controllable. And DMLS can be used with a variety of alloys, allowing functional prototypes to be made out of the same material as production components. With SLM, the metal powder is not merely fused togetherbut is actually melted into a homogenous part by a high-power-density laser. Because of reduced porosity, parts made with SLM exhibit high strength by controlling crystal structure of the finished metal.

Furthermore, channel design can achieve greater flow within a smaller space. Passageways connecting internal channels don’t have to be machined from outside a manifold, eliminating the need for hole plugs.

Aidroused this technology to manufacture a compact, lightweight manifold in a portable hydraulic power unit. The result is a hydraulic manifold that weighs about one-fourth that of its conventional counterpart machined from a solid block of metal. The 3D-printed manifold had to match up dimensionally to a previous design and also serve as the top to the HPU’s hydraulic reservoir. Without this restriction, the 3D printed manifold probably could have been made small, which would have reduced weight even more.