During the construction of the headquarters of the Sächsische Aufbaubank in Leipzig, (Germany), a semi-circular staircase with an intermediate platform was to be erected, which is mounted on a supporting wall. In order to give the staircase a smooth, uniform curve, an incredibly complex but precise concrete formwork was required. 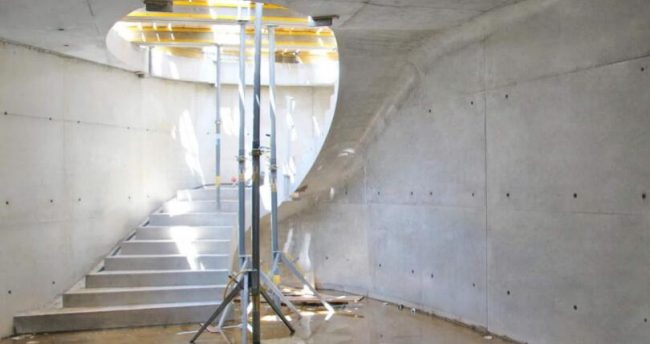 The project managers entrusted the world-renowned formwork supplier Doka with this task. After extensive evaluation and definition of the formwork design for the staircase, the different surfaces were categorized according to their complexity. Single-axis curved surfaces with cylindrical or conical shapes were formed conventionally. The specific feature of this staircase, however, was the triaxially curved surface, which represents the rounded overhang of the staircase to the inside of the supporting wall.

The production of such shapes with conventional craftsmanship is extremely time-consuming. Wooden bars have to be cut, bent into shape, fixed and bonded together. Subsequently, the surface must be sanded and smoothed several times before it is varnished twice. The result is a part whose load-bearing components have been assembled under tension and were manufactured out of organic materials. Under the influence of temperature and humidity fluctuations at the construction site as well as general weather conditions, wooden cracks can easily occur which visibly affects the quality.

This is where Binder Jetting 3D printing process from voxeljet offers considerable advantages. Components can be produced quicker and with less engineering effort directly from 3D data. The 3D-printed components are manufactured precisely and tension-free and are therefore dimensionally very stable. The homogeneous material offers additional quality assurance in regard to the weather influences mentioned above. Out of its German service centre, the company 3D printed seven formwork panels from sand, with a wall thickness of just 21 mm. The manufacturer then infiltrated the elements with epoxy resin in order to achieve the necessary rigidity. After sanding and coating by Doka, the formwork was ready for use. One important aspect was that the threedimensional, curved voxeljet elements were designed in such a way that they could be perfectly combined with the standard Doka formwork on site. For example, the Doka staff had placed functional integrations such as drill holes and plug-in connectors in the data set. This enabled quick and efficient assembly of the formwork. The entire formwork was preassembled quickly and efficiently at the Doka plant. 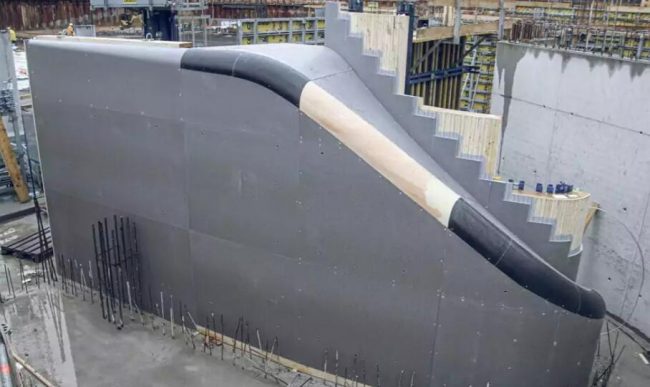 The construction of the formwork at the construction site was very fast and efficient due to the high precision of the 3D-printed formwork. A further advantage of the post-treated epoxy-sand mixture is its weather resistance and scratch resistance. The use of voxeljet formwork has proven to be ideal in several ways: Firstly, only a tenth of the usual assembly time was required. Secondly, the 3D printed components matched one hundred percent with Doka‘s CNC-cut Xlife panels when assembling the formwork elements. This hybrid approach ensures the cost-effectiveness of the formwork solution with 3D-printed components. Thirdly, the high precision of the fabrication was impressive, due to the consistent digital data processing of the 3D printed geometries from design to assembly. After successful concreting and demolding, the casting results of the staircase could be compared.

The result was astounding: the part of the staircase that was illustrated with voxeljet formwork showed very good casting results corresponding to the quality of the 3D printed elements. Neither bleedings nor concrete nests could be found. With hindsight, the Doka employees say that it definitely might have made sense to realize more surface areas for the project using 3D printing. As the project has proven, Doka is also convinced, that the voxeljet formwork can be used for construction sites with exposed concrete surfaces.

One of the first projects took place in cooperation with Züblin and MEVA. For the „Stuttgart 21“ project – in which Züblin is involved in several construction phases, amongst others with complex funnel shapes that are to be created in the underground station. The uniqueness of these complex forms are the double curved shapes, especially in the upper section. A hybrid solution consisting both of conventional formwork and 3D-printed sand molds was implemented to receive a first large proof of concept.

As a test, four formwork elements were printed in the voxeljet headquarters in Friedberg and infiltrated with epoxy resin. The 3D printed elements formed the contouring formwork, which was supported by conventional wooden frames which were easily attached to the printed formwork. The elements were further processed and optimized in order to ensure efficient 3D printing on a VX4000 3D printer. The largest of all four elements, printed in one piece had dimensions of 1980 x 1082 x 289 mm. The 3D printing process took about one day. Subsequently, the material had to be hardened with epoxy resin. Finally, after the completion of the printed formwork elements they were filled with two cubic meters of concrete. Like the pictures below show, the desired complex geometric shape could successfully be produced.

Furthermore, the installation of the formwork, dismantling and the general handling of printed formwork was successfully tested with this collaboration under construction environment. It was also possible to prove that the water-repellent formwork from the 3D printer can be reused without any problems, which makes this process even more economical. This large-scale test brought the decisive requirements for concrete casting applications using 3D printed formwork: The printed formwork elements need to be reduced in terms of thickness, resulting in a further descent of print volume, weight and costs.