The Benefit of 3D Printed Application for Engines in Motorsport.

Hartley Engines and Motorsport from New Zealand is a leading company designing, developing, and manufacturing high-end engines and components for Motorsport and small Car Companies. Some of their achievements include many championship wins with their customers in Motorsport categories all over New Zealand and Australia, multiple land speed records at Bonneville (in a 1000cc mini of all things), and plenty of awards for innovation in Motorsport Engineering. Their flagship engines include their 10,000rpm, 1,000+HP V12, and their high RPM ‘Formula 1 Inspired’ quad-cam V8.

In the past, their main business had always been the production of Engines for top teams in high-level competition, with most of their development being very secretive and only for select customers. Recently they made the move into to supplying their engine kits and development to other Engine Developers and have just started doing more retail of their components to general consumers all over the world for use in their own projects.

“We came to realize that we simply couldn’t, or didn’t want to build engines for every competitor, there simply aren’t enough hours in a day. But we found we could supply a better service to everyone by making our range of components and development available to everybody.” Says Nelson Hartley, owner of Hartley Engines.

One of Hartley Engines’ strengths is its ability to very quickly design and develop its products and get them ready for production. Their factory consists of 5-axis CNC mills, CNC lathes, Engine Dynos and airflow testing equipment just to name a few. Recently they made the move to the next level with additive manufacturing on production parts. Nelson and his team have been developing the use of 3D printed parts in their engines for several years, and although successful in testing, had a lot of trouble getting them to a point of being ‘production ready’.

“I very early identified some serious benefits of using 3D printing. The material properties of some of the high-end polymers are seriously impressive and perfect for things like our intake manifolds and induction parts.”
Being designers and engineers, they have found novel ways of using printed parts alongside billet parts and carbon composite parts in what Nelson refers to as a “Hybrid manufacturing method.”

While the COVID pandemic had an effect on their in-house production, one job on the list of Hartley Engines and Motorsport was to do a redesign of the throttle bodies that were used on their intakes. The individual throttle bodies are a billet aluminum part, machined in-house, but the secrete to their intakes is the 3D Printed intake runners and trumpets.

“The material we are using for our intake runners is a High-Temperature Nylon (PA), with 25% carbon fiber… the way PA-CF deals with temperature outperforms aluminum. It transfers heat very slowly, keeping out intake path very cool, aiding combustion once the cool air gets into the engine.”
“The added bonus of 3D printing our runners and trumpets is the design flexibility, we take the intake shape very seriously, it is not simply just a round hole machined into a piece of plate, we can 3d print extremely intricate curves and shapes and they line up with the CAD models of our cylinder heads”

“We were wasting more prints than we could afford, and when some of the plastics cost upwards of $500/kg (plus freight to NZ), it was getting to the point of not being viable to print the parts, I knew it could be successful, but we just couldn’t get it to work every time”
“Since we took delivery of our first INTAMSYS FUNMAT HT, we have had a 95% success rate with our prints… I had a lot of people in the industry tell me that there was no way we could make production parts on a 3D Printer, but the INTAMSYS has proven that wrong!” Since purchasing their first INTAMSYS FUNMAT HT, Hartley Engines have since received its second machine, and are now building a dedicated Additive manufacturing department in their workshop with intention of installing 2-4 more INTAMSYS FUNMAT HTs once it is ready.

As their business grows, Hartley Engines and Motorsport is always facing the problem of getting parts to market as quickly as possible, everything they make is unique and requires new approaches to solving problems.

“Anyone who says that 3D printers are going to replace all CNC machines is lying, but likewise, anyone who says you can’t do production work on a cost-effective 3D Printer like our INTAMSYS FUNMAT HT is being short-sighted”

“Our INTAMSYS FUNMAT HT was literally 1/30th the cost of our 5 axis CNC machine, and the parts we are making on it are just as valuable to the consumer… so even if the per-part time is much slower on the printer, I can afford to have multiple printers running at the same time in batch work, and it actually becomes more efficient in some cases than setting up the CNC machines. Our return on investment has been extremely high!”

As anybody who has worked in traditional manufacturing methods knows, setup and tooling are both expensive and time-consuming.

“We used to spend hours setting up our machines and making tooling just to machine or fabricate one part. Now, all I have to do is heat up the INTAMSYS FUNMAT HT and press start. No tooling or setup required.” 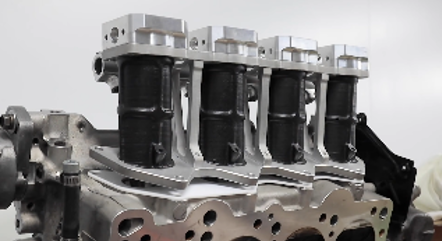 3D printing is also used for making plenum for a turbo engine. Seen on the left of the below pictures is composite tooling for the part, printed in a few segments in the first place, then joined together with the entire surface carefully polished. The right one is a final high-performance product made out of the composite tooling after it went through the whole carbon fiber process of laying and curing. * Plenum for a turbo engine

After using the INTAMSYS FUNMAT HT, Hartley Engines and Motorsport said they were already confident that the print part would be very good but were amazed at the performance of it. Nelson said, “The quality of our high-temperature parts is amazing, and we are just starting to get into production with the parts we sell … We have been developing this for about 3-4 years, and since we got the INTAMSYS FUNMAT HT we have been able to solve 99% of the problems we were having before.” Now with a bigger range of sizes, more space for linkages, and with faster production in mind, next is to get through the large list of intake manifolds and plenum Hartley Engines and Motorsport is designing, using this new lean-manufacturing method they have come up with.