The electrical thruster mechanism (ETHM) was developed by Thales Alenia Space for its all-electric Spacebus Neo platforms used for geostationary communications satellites. It steers the electric thrusters in two axes to provide orbital positioning and attitude control throughout the satellite’s lifetime. Developing the ETHM required innovative research in additive manufacturing, making it a key part of our Spacebus Neo product line. 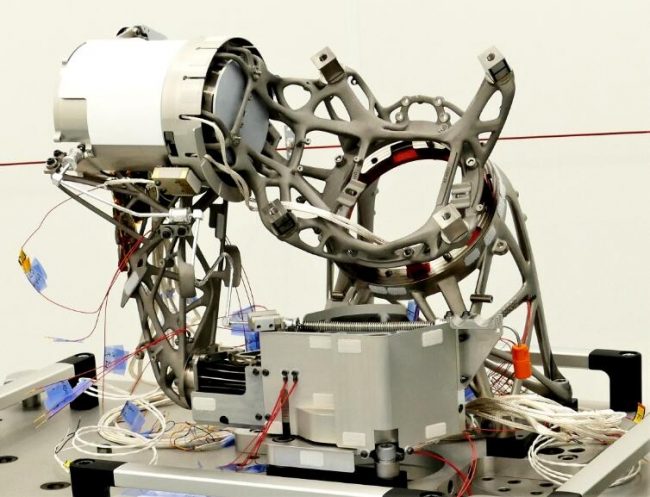 The ETHM is a particularly complex mechanism, comprising no fewer than seven structural parts of titanium, with a design optimized by Thales Alenia Space’s engineers. By optimizing these shapes according to their functions, as well as reducing weight, our engineers came up with organic forms that offered the best combination of operational, mechanical and thermal functions.

According to Xavier François, head of mechanisms, “Thales Alenia Space can already draw on a strong track record in 3D-printed structural components for space, but we have now expanded our scope of expertise with the ETHM. These types of mechanisms demand special skills because of their size, the critical nature of the system and its high precision.”

The thruster bracket alone requires 249 different measurements after its precision machining. The ETHM is one of the first complete space mechanisms designed from the ground up for additive manufacturing. Because of the number of parts involved in this mechanism (28 for each Spacebus Neo-based satellite) and their relatively large size (up to 360 mm), we set up a triple-source supply chain and a technical qualification phase for prototypes representing the final shapes. French space agency CNES, along with its British (UKSA) and European (ESA) counterparts, has invested in the development of this prestigious product since 2017, as they did on antenna brackets and other structural parts in the past, alongside the prime contractor and its customer. This process continued through recent steps including qualification, correlation of models and above all their use on two Spacebus Neo-based geostationary telecom satellites in orbit.

Three shipsets of four ETHM units each have been produced since 2019, with fully satisfactory results for several different customers reflecting our major technical and organizational advances. 3D-printed parts of titanium have proven to be totally reliable. These components are already used on two telecom satellites in orbit, as well as on another satellite now being integrated at Thales Alenia Space. In fact, the production process has been so successful that it’s changing the additive manufacturing paradigm, from one-off fabrication to small production runs. 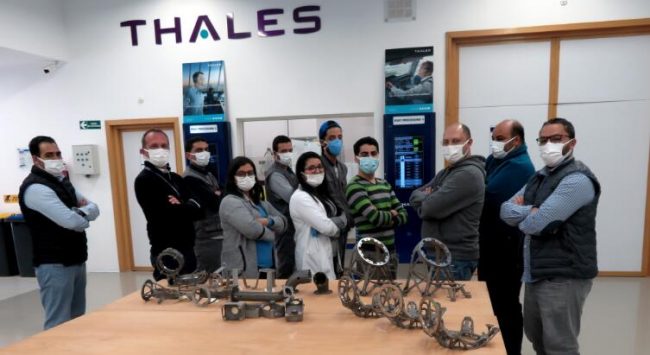 The Thales 3D Morocco team presents the parts made for Thales Alenia Space.

In 2019, Thales Alenia Space began transferring the manufacture of these 3D-printed parts to Thales 3D Morocco. The plant continues its development to support Thales’ ambitious roadmap for the additive manufacture of metal parts. 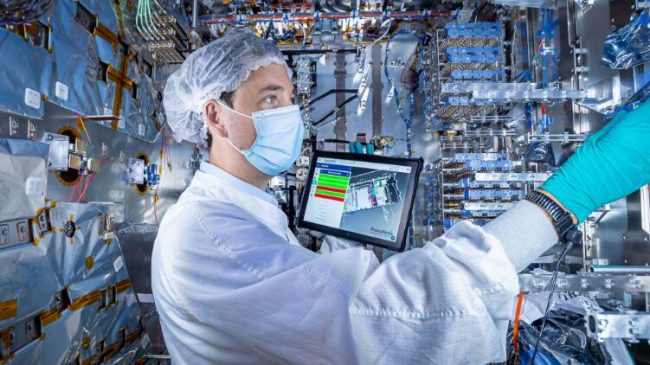 Additive manufacturing is an integral part of our comprehensive strategy built on innovation and digital transformation, reflected in the Factory of the Future concept. In today’s fiercely competitive communications satellite market, you have to manufacture “more, faster and cheaper”. New technologies have become the key to building more satellites in less time, against the backdrop of a fast-evolving industrial environment. The Factory of the Future therefore aims to introduce state-of-the-art, highly cost-competitive technologies that are essential to any company’s digital transformation. And we’re not just talking about additive manufacturing, but also robots, cobots, Industry 4.0, augmented and virtual reality, digital twins and much more. The word “innovation” may have become something of a cliché, but its essential meaning comes into its own at Thales Alenia Space! Today, all the communications satellites rolled out of our clean rooms incorporate 3D-printed parts. All in all, there are already several thousand aluminum and titanium 3D printed parts in orbit.