Jigs and fixtures don’t have the glamour of final parts, they’re not even as sexy as prototypes, but they are a necessary evil that the majority of manufacturing needs. With a slew of innovative thinking in the additive manufacturing (AM) space, there’s a revolution in how they are being brought to life.

Per the 2018 Wohlers Report, 7.3% of AM users harness the technology to produce tooling equipment, among them the likes of Indaero, Boeing, Eckhart, Ricoh Japan and Volkswagen Autoeuropa. It is a growing trend within industry, not least because of the significant cost and time reductions offered. VW infamously achieved a 98% of the former and 89% saving of the latter with its use of Ultimaker systems, and multi-billion-dollar manufacturer, Jabil has implemented a similar approach, with similarly effective results; an 80% reduction in delivery time and 40% reduction in costs. An assembly fixture manufactured by Jabil using an Ultimaker machine.

Jabil has an army of Ultimaker machines producing jigs and fixtures in small volumes, as and when required. The company turning to the Fused Deposition Modelling (FDM) process like many other industry players to manufacture tools. Going forward, though, it has grander plans. Plans that contribute to a trend that sees the users and makers of AM technologies pioneering methods that promise simplicity and proficiency. 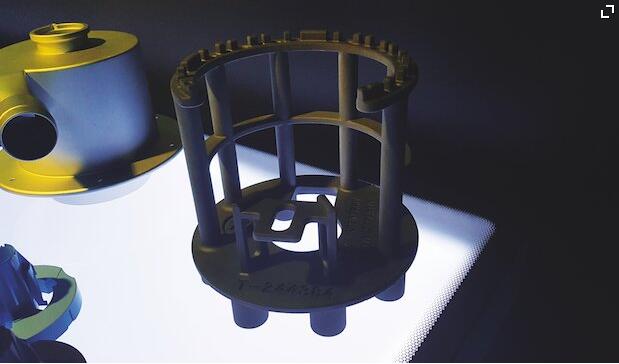 Jabil announced its Additive Manufacturing Network, which, in the long-term, will see dozens of Multi Jet Fusion (MJF) platforms deployed in manufacturing facilities all around the world. Jabil is serious about leveraging HP’s 3D printing technology as a volume manufacturing tool to deliver end-use parts to its customers in the aerospace, automotive, medical and consumer goods industries, and such are the capabilities of the MJF machines, foresee manufacturing tooling, jigs and fixtures concurrently to optimise the whole process.

It will be enabled by HP’s 380 x 284 x 380 mm build envelope which can print multiple parts, whether the design is the same or not, at the same time, and even stack parts on top of one another. It means Jabil would be able to let tools ‘ride for free’ as end-use manufacturing ensues, and effectively buy the company time.

“Jigs and fixtures are less cost sensitive than making a part. We’re always trying to squeeze costs out of the process,” says John Dulchinos, Jabil’s VP of Digital Manufacturing, “but the ability to get this to do better, faster turns and get a fixture and jig that streamlines the process is more important than ‘can we save a few pennies on fixture and jigs?”

HP 3D Printing’s VP, Global Head of Customer and Market Development, Scott Schiller continues: “There’s way more cost impact in the flow of the production line, and if you have a change notification coming through and you need to change that jig for the whole production line to work, timing is everything.”

This strategy is being adopted to maximise Jabil’s efficiency, though Ultimaker systems will still be used for one-off production runs. The new method will require Jabil engineers to get creative with the design of jigs and fixtures to ensure parts are stackable or collapsible and area that isn’t necessarily required anymore, because the part is no longer being injection moulded, is removed. 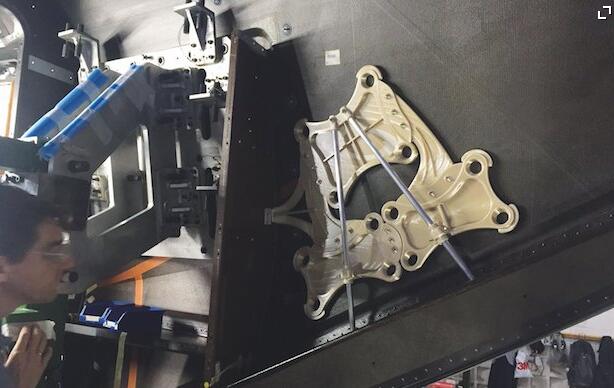 That third design consideration is relevant on FDM platforms too. Stratasys, the company famed for bringing the FDM process to market, has a range of industry players harnessing its technology for tooling. The likes of Boeing and Orbital ATK are among those taking advantage of the potential to streamline operations by making jigs and fixtures quickly and almost immediately integrating them into the manufacturing process, and soon they’ll have a platform to help enhance the design of those tools. With its latest software product release, Stratasys is looking to make the entire process as quick, and as easy, as possible. 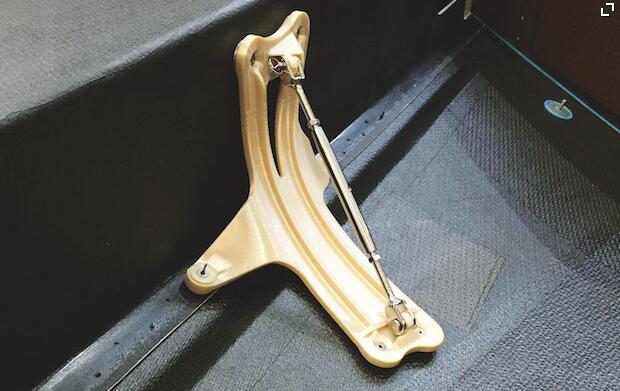 Driven by customer need, the ‘fundamental bedrock’ of Stratasys’ jigs and fixtures software is to pull in native CAD data, rather than require neutral CAD, to design parts. The company has done away with the ‘Stratasysms’, language that was only relevant to Stratasys products, because ‘that’s not how engineers think’, instead striving for simplicity. Engineers might want to make things smaller, or stronger, or lighter, and so now they can, using a slider to alter these properties to better visualise the change, or for more precision, input the numbers manually. Then with the click of a button, the design is updated. Users can change the geometry of a part inside the print preparation tool, and within a matter of minutes, have the design specifications for their jig or fixture that they require.

“We’re trying to take the brain of someone who has been doing this for ten years, the tools that are in Insight [a Stratasys print preparation software], and the easy user interface in GrabCAD Print, and put them together,” explained Shuvom Ghose, Go-To-Market Engineer, Stratasys.

From vendors and users of AM technology alike, there’s a concerted effort to enhance an already promising application, proven to yield impressive results, by implementing focused strategies around their development. Stratasys and Jabil are two such companies, and it could have a big impact on the way they are designed, and the way they are manufactured.

“If you want to make a jig, it’s got to be accurate,” Phil Reeves, Stratasys VP Strategic Consulting, says. “There’s a whole range of applications where these higher performance materials like ULTEM, PPSF, and PEKK, have a place on that shop floor. Jigs and fixtures is one of them. Until now, the problem has been the people with the prototyping machines haven’t got the software to design the jigs and fixtures. That’s where GrabCAD Jigs and Fixtures software comes in.”

“Companies like Jabil make their living in continuous improvement, lean operations, and so we really need to constantly be iterating an assembly jig because it streamlines the workflow. It will be a valuable thing to do,” Dulchinos explains. “Seems to me that, in the long run, all fixtures and jigs will be 3D printed, some will be in plastic, some will be in metal, but ultimately it just makes perfect sense.”

John Dulchinos points out Jabil’s implementation of AM mainly centres on the manufacture of functional end-use parts. But Jabil is a company that manufactures millions of parts a year, and not all of them will be 3D printed, meaning during the manufacture of many products, Jabil will need a jig to guide tools in operation and fixtures to hold parts down. Eckhart, Volkswagen, and Ricoh will too. And between them, they will soon have tailored methods enabling them to best-use their preferred 3D printing process for tooling components.

Jigs and fixtures might only make up a smidge of the manufacturing market today, but taking into consideration the plethora of benefits, the focus from AM OEMs, and the dexterity of industry users, they’re likely to make up much more than just 7.3% of the AM one. It just makes sense.