Additive manufacturing in the rocket propulsion industry is a huge opportunity. The process can achieve optimal design while keeping costs low. Private enterprises have become heavily involved in the space industry and when it comes to private business, whoever successfully (and safely) launches the largest payload into space with the most efficient engine will win the race. A key factor for human space activity is keeping propulsion parts cool enough so that they don’t fail, regardless of the size of the engine and payload. Another is the re-usability of parts, with cost-effectiveness in mind. Therefore space propulsion systems are very important and additive manufacturing (AM) is front and centre. Here we discuss why. 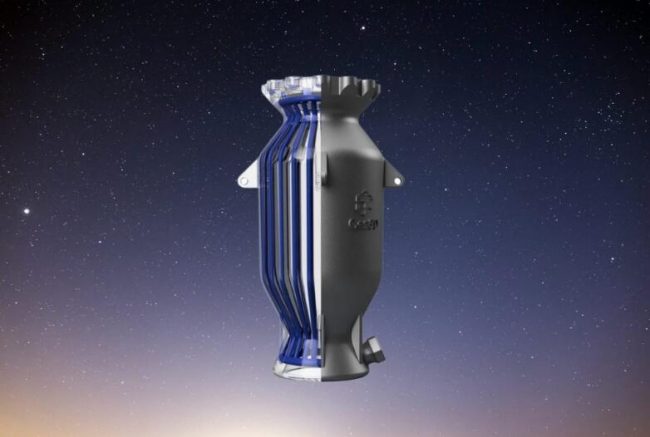 With so much competition, innovation has sky-rocketed (pun intended) and advanced manufacturing techniques such as additive manufacturing (AM) are being widely used, particularly for space launch systems and satellites. 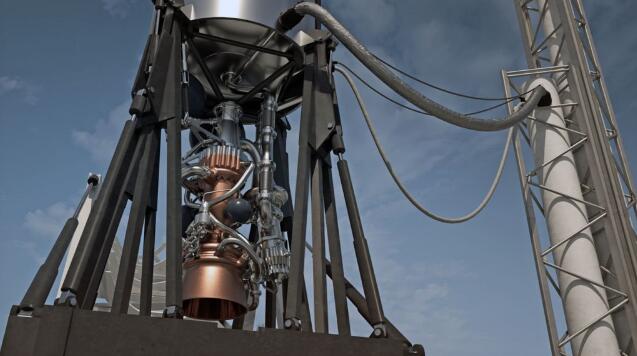 Materials selection for the system is important and cooling is vital

When people think about engines, they usually think about rotation. However, rocket engines are reaction engines. This means it ‘throws’ mass in the form of high-pressure gas in one direction to get a reaction in the opposite direction.

A rocket engine is all about getting exhaust gas as high pressure and as hot as possible and then making it all move in one direction at speed without melting the engine walls. By fast, we mean, supersonic fast.

Today, space propulsion systems are generally powered by liquid fuel and to reach orbit, combustion temperatures inside of the combustion chamber can exceed 3200℃. Therefore materials selection for the nozzle is important and cooling is vital.

Organisations, such as SpaceX, Orbex and Rocketlab have taken various approaches to material selection for rocket nozzles. Some use high-temperature superalloys such as Inconel 718 and others have adopted higher conductivity materials, including copper alloys such as CuCrZr. 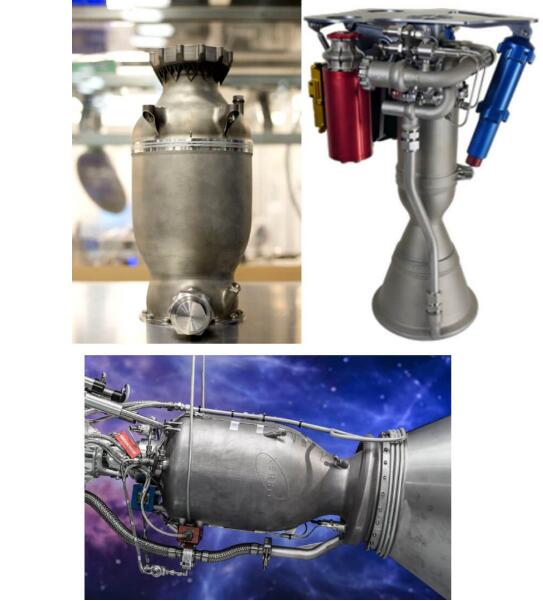 The injector mixes the fuel with the oxidizer and then the igniter creates the spark to light it within the combustion chamber. This produces hot gas, which moves through the nozzle to create thrust. The nozzle is the end component of the propulsion system and gets very hot indeed. This is why cooling is so important.

Robert Goddard essentially began the rocket engine industry by building and flying the first liquid-fueled rocket in 1926. He was the first person to apply the convergent-divergent (CD) nozzle, without which, rocket engines wouldn’t work, because supersonic flow in the engine would be impossible. A CD nozzle essentially converts high-pressure gas molecules travelling in all directions into a high-velocity gas moving in one direction.

First flight of a liquid propellant rocket, by Robert Goddard in 1926.

After the Apollo project ended, the largest obstacle to more space activity was expense. The primary goal of NASA’s Space Shuttle Program which began in 1971 was to provide a consistent and reliable mode of transportation to the International Space Station (ISS) with high payload. A key element of the Space Shuttle Program was the necessity to produce reusable parts, which would reduce cost.

Rocketdyne developed a new liquid-fueled engine in 1971 that would become the Space Shuttle Main Engine (SSME). Regenerative cooling was also applied. Interestingly Robert Goddard had actually invented regenerative cooling in 1921 but had rejected it as being too complex. 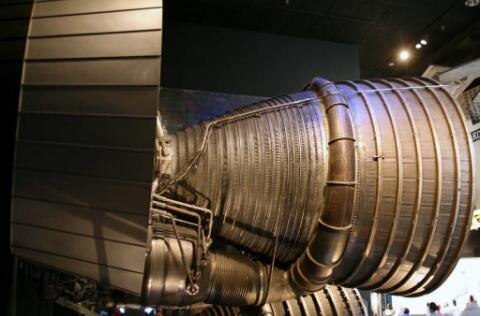 How does cooling work?

Without cooling, a rocket engine would be heated to its melting point within seconds and the walls would become so hot that the stresses would cause the walls to fail.

The factors affecting heat transfer are:

These are all much higher in rocket engines than in other internal combustion engines.

There are 6 processes for cooling a rocket, although, for liquid-fueled rockets, regenerative cooling is almost always used:

With regenerative cooling, one of the cryogenic rocket propellants (part of the liquid fuel) is passed through the nozzle and combustion chamber in order to liquid cool the metal. This acts as a heat exchanger by absorbing thermal energy through convection. In the process, the fuel is preheated, which resembles a regenerative heating cycle – and this is how it gets its name.

The Rocketdyne engine of 1971 achieved regenerative cooling by flowing liquid fuel through rectangular cooling channels, machined into the exterior surface of the chamber and nozzle. This was the most reliable method for cooling channels despite limited tolerances and exponential cost. There is a lot of merit to utilising the fuel as a coolant and one of these is that reusing the energy absorbed through cooling is very cost-efficient and is a key reason why regenerative cooling is still so popular.

Why did regenerative cooling need to innovate?

Liquid rocket engine components traditionally require complex manufacturing processes to fabricate the thin-walled large scale features of a nozzle with channel cooling. Therefore internal cooling channels were expensive and time-consuming to develop. For instance, the F-1 engine built as part of the Space Shuttle Program was made up of more than 5,000 individually manufactured parts (not including the injector).

Also usually, machining and brazing were required which added to the time and cost.

Reusability is also one of the best ways to reduce the cost of space transport, and for this, parts need to have an operating life of hours rather than seconds. For this, you need additive manufacturing.

Why additive manufacturing in the rocket propulsion industry?

Additive manufacturing has become a ground-breaking production method in the rocket propulsion industry. Cooling channels are still absolutely vital, but the fabrication method has changed.

The four key principles of design for additive manufacturing

With AM, coolant channels that would require many operations to manufacture traditionally can be designed and made in one process, e.g. part consolidation. The cooling channel configurations are printed directly into the thrust chamber and nozzle. You can see this in the photo below. 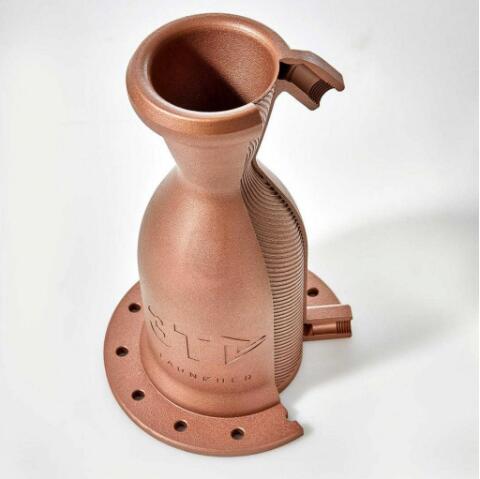 AM also allows the coolant channels to be formed through the additive technique that is ‘closed out’ in the same operation, which completely cuts out the complexities of plating or brazing.

Parts are also consolidated in other ways, such as incorporating individual features like injectors within the combustion chamber and the nozzle into a single part. This can save time on assembly and also reduce the risk of failures that occur at brazed joints. 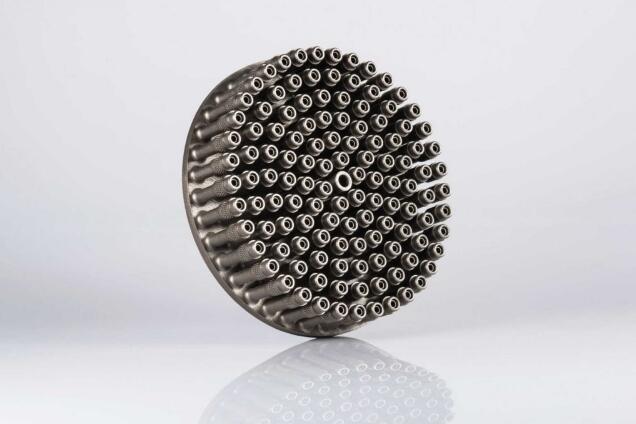 Ariane 6 injector plate printed as a single part. An example of how design for part consolidation can be used in additive manufacturing.

One of the most effective ways to increase a component’s life, which in the case of space propulsion means reusability, is to reduce mechanical stress and thermal loads. AM simplifies the production of space propulsion systems by eliminating many processing steps. This provides better performing, cheaper, reusable parts with shorter lead times. 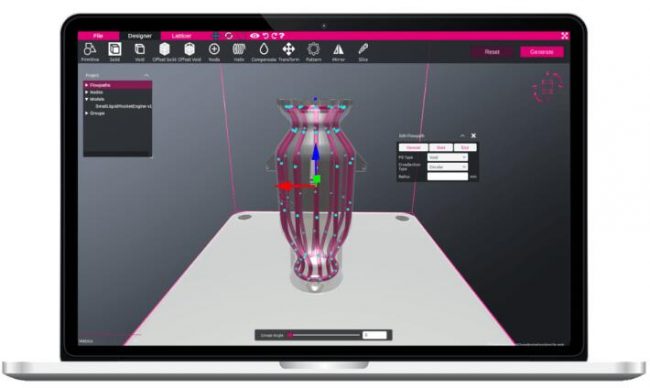 Rocket nozzle with conformal cooling designed in Sulis, Gen3D’s design for AM software 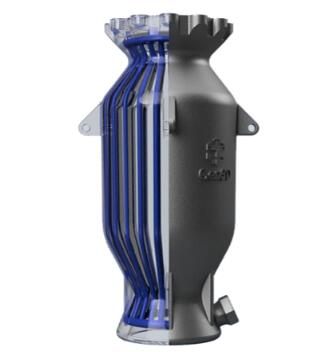 Since showcasing this initial rocket nozzle design prototype via events and media coverage, a number of companies have approached us requesting to print the nozzle as part of their own prototyping research.

Photocentric has printed the rocket nozzle using their Liquid Crystal (LC) Magna. In the image below you can see the build orientation that the part was printed in. As you can see, the design is self-supporting and only needs a small number of support structures to anchor the part to the build plate. 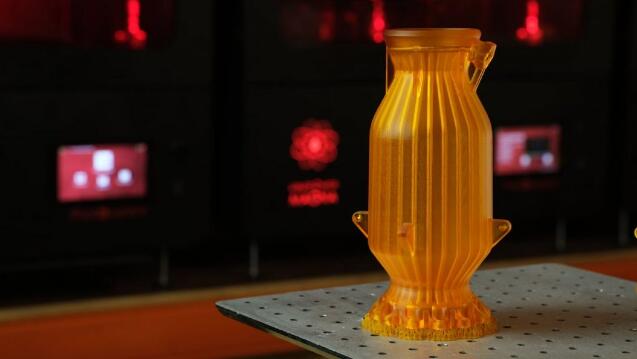 Since this process creates fully dense solid components, a section cut was created so that the cooling channels were visible for clients to view. HBD took our professional design capability in our Sulis design software and said that the conformal cooling channel was quickly designed with a uniform flow channel area, ensuring a uniform flow rate and high efficiency for heat transfer. The material used was Inconel718. 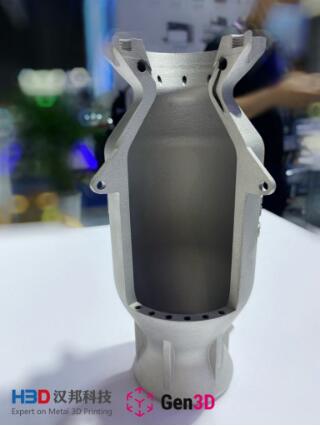 The design freedom of additive for space propulsion

Additive delivers design freedom, unlike any previous manufacturing technology. With this freedom comes the potential for space propulsion part performance at a level beyond what we’ve known before. Aerospace is a key industry where reduced weight and performance gains can lead to significant cost savings over the lifetime of the part and these are key benefits of AM. The component that is now almost exclusively manufactured using additive manufacturing is the rocket nozzle.

Improvements and innovations are being made rapidly as the space race continues and the time to get involved is now.