The Evolution of Additive Composites

In October 2020, CW reported on composites 3D printing with continuous fiber and provided a landscape of the technologies being developed, as well as a classification of the processes being used. The latter was contributed by Alexander Matschinski, research associate and expert for Additive Manufacturing at TU Munich and the Chair for Carbon Composites (Lehrstuhl für Carbon Composites, or LCC, Munich, Germany). CW is again teaming with LCC, but this time to look at the larger additive composite manufacturing (ACM) landscape, especially processes being developed at the interface between conventional composites and additive manufacturing (AM). “We see more and more technologies that lie outside our classifications for continuous fiber 3D printing, but instead are combining automated composites manufacturing with AM and are offering new solutions that weren’t possible until now,” notes LCC researcher Thomas Wettemann. LCC itself is blurring the lines between traditional processes and 3D printing by combining automated fiber placement (AFP) and filament winding (FW) with extrusion-based ACM (see “Future composite manufacturing — AFP and additive manufacturing”). “We are also moving from traditional extrusion of thermoplastics to 3D printing with thermosets by adapting technologies we developed for resin transfer molding [RTM] and combining with ultrasonics,” says Dr. Swen Zaremba, deputy head of LCC. Simultaneously, LCC is working to develop standards for ACM and improve its materials and processes.

What is ACM?
“We usually have this discussion first, as well as the motivation for developing these new technologies,” says Zaremba. As explained by Wettemann in a January 2019 SAMPE presentation, the motivation is cost-effective production beyond mass production — including a lot-size of one — that also conserves resources, minimizes or eliminates waste and is environment- and climate-friendly. “It also offers a way to make the composites process chain fully digital,” he adds. “It is the first step on the way of decades of change.”

Key components of LCC’s definition of ACM include:

“ACM concentrates what were previously long processing chains into more or less a single point, a kind of manufacturing inside a box,” says Zaremba. Thus, adds Matschinski, “you are processing the materials and giving the part its shape inside that box and without a molding tool.” Both agree that the “box” may be a very large ACM cell, for example, the SCRAM cell unveiled by Electroimpact (Mukilteo, Wash., U.S.) in 2020. “ACM may also be used outside a single box,” says Zaremba, “for example, our work to add local reinforcement and smaller features to larger AFP parts.”

However, notes Wettemann, “we now see examples of the whole composites process chain contained in an automated line or cell, but this is not what we would define as ACM.” The SCRAM cell, in contrast, has the ability to process material and give shape without tools by combining an in-situ consolidation (ISC) thermoplastic AFP head with a fused filament fabrication [FFF, another term for FDM] 3D printing head. “For us, this in-situ consolidation using AFP was indeed the beginning of ACM at the LCC because you create the cured/consolidated composites as you perform placement or layup,” says Zaremba.

This brings us to the second key point in the LCC’s definition of ACM. “Before, you always had a global consolidation step and ideally the same material treatment and history across the part as it was molded in an autoclave, oven, heated tool or press,” Zaremba explains. “With ACM, we are performing this heat treatment and consolidation on a local basis as we build the part.”

Wettemann points out that ISC offered an entry point from automated composites manufacturing into the world of AM, “but this also presents real challenges for the materials and processing because this local material treatment is also a recurring heat treatment. Note that at the beginning, we were just adapting injection molding materials for 3D printing. But then we recognized that it is not really optimized for FFF printing. So, companies started to modify materials for their printing systems in order to deal with the recurring heating and cooling of the resins, and also the required speed and the need to adhere layers together as well as avoid warping. The latter is also why more and more companies seek to include continuous fibers.” However, integrating continuous fibers also creates issues. “That is one reason why we were drawn to ACM,” says Zaremba. “3D printing processes promised a lot of results, but the results didn’t deliver the type of quality we expect for structural or aerospace applications, for example. We could see a gap between advanced composites using continuous fiber and what AM technologies can deliver. LCC is aiming to bring these worlds together and to realize the promised potential, but also to combine technologies to achieve new solutions.”

LCC sees many such new solutions, for example, the Additive Molding process developed by Arris Composites (Berkeley, Calif., U.S.) and the Fusion Bonding cell for 3D printing developed by 9T Labs (Zurich, Switzerland), both of which are high-volume processes. “Neither of these processes gives the final part shape inside of the additive process, but use a type of mold and a second step in that mold,” says Matschinski. “So, this does not conform to our definition of ACM. However, both present interesting solutions combining traditional composites manufacturing and AM technologies.”

“9T Labs is definitely using 3D printers,” notes Wettemann, “but to create a preform which is then processed in a digitized forming process to create lightweight thermoplastic composite components that are completely new and address markets which couldn’t use composites technology before.” Here, he refers to 9T Labs’ goal of replacing metals in parts where injection molding cannot deliver enough performance. “At LCC we have also researched how to introduce endless fibers to injection molding, but it’s quite hard to make a precise positioning of endless fibers in the injection process.” In contrast, the technology at 9T Labs offers what appears to be an easy-to-implement manufacturing method for high-performance parts.

Arris Composites has a different approach but achieves a somewhat similar goal, albeit aiming for part volumes an order of magnitude higher. “We not only enable high volume production of continuous fiber parts but also add multifunctionality that unlocks dynamic part consolidation,” says Riley Reese, co-founder and CTO of Arris Composites. “For example, we turned a 17-component assembly into a single part while increasing strength and adding properties such as radio transparency. We are cost-competitive with compression molding — for example, SMC [sheet molding compound] — but with the performance of continuous fibers.” 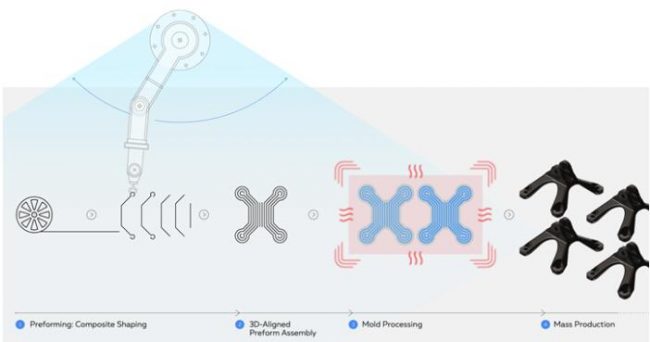 Going back to LCC’s definition of ACM, the third key component acknowledges the debate between manufacturing with and without a molding tool. “Direct approaches are where the final shape comes from the print — I never have a tool,” says Wettemann. “The advantage is to be completely free of tool manufacturing. As long as we have molds, then we are talking about indirect processes, or we are talking about more conventional composites manufacturing, which is then aided by AM technologies.”

Wettemann notes that such hybrid approaches are helping address factors such as consolidation and tooling that increase the cost and time of traditional composites manufacturing. “We saw developments by the Digital Manufacturing and Design Centre at Singapore University of Technology and by Mikrosam [Prilep, Macedonia] from 2015 to 2017 where automated robots were developed to produce advanced composite parts in an AFP-type process but without tooling,” he explains. “So, this is proceeding toward ACM in that both approaches succeeded in digital manufacturing in free space without a tool, but further development is still needed. Reducing the need for tooling is key because that also gives us new possibilities for both manufacturing composite components and the type of components that can be made.” For example, the very organic load paths output by topology optimization and generative design software are indeed pursuing the efficiency of biological structures like bone and trees, but they are very difficult to manufacture with continuous fibers.

“In direct part manufacturing, we’re seeing the same that you’re showing in your landscape, that the lines are blurring and we are moving to a much more hybrid manufacturing approach,” says LCC researcher Patrick Consul (see “3D printing CFRP molds for RTM flaperon, exoskeletons and more”). Earlier this year, his team completed first trials of a hybrid approach combining material extrusion and directed energy deposition [DED] using a laser-based prototype machine to print on pre-consolidated laminates and very large 3D prints without a heated chamber. “We’re also working on combining ACM with milling and AFP, which are really good fits because they all rely on complicated toolpaths,” he says. “The transition between them becomes rather simple and you don’t need much additional training.” Thus, the process chain is shortened, digitized and simplified. LCC is also pushing the hybrid approach by combining technologies developed for RTM and 3D printing. “The result is similar to curing on the fly, but we wanted to move away from UV-cure resins because they are a little bit too expensive when you want to build bigger parts,” explains Zaremba. “Instead, we use a novel ultrasonic mixing technique that we developed for RTM and now adapt it for use in a typical extruder with inexpensive, quick-cure epoxies which were developed for the automotive industry.”

Matschinski explains this technology further: “We are using the ultrasonic vibration to mix and cure the epoxy resin almost instantaneously as we deposit the impregnated fiber during printing.” How is this different from the ultrasonics being used by the DLR Institute of Composite Structures and Adaptive Systems in Braunschweig, Germany (see “Reducing the cost of continuous fiber 3D printing materials”)? Matschinski explains, “DLR is using the ultrasonic vibration for improving the infiltration of a thermoplastic matrix into the spread fibers to create continuous fiber-reinforced 3D printer filaments, which are then printed using conventional material extrusion. We use ultrasonics for hardening a continuous fiber-reinforced thermoset filament.”

“Organizations such as Arris Composites, 9T Labs and our teams here at LCC, for example, are interesting because they have roots and employees both from the composites world and also from the AM world,” says Wettemann. “They come together to create new technologies that can help now to move us away from a future economy that is potentially resource- and growth-limited, struggling with climate crisis. They provide a path toward needed solutions.”