What Does Resolution Mean in 3D Printing?

166“Resolution” is an often discussed but seldom understood value in the world of 3D printing. How does XY and Z resolution influence on the quality of your 3D prints? What’s minimum feature size and what layer thickness should you choose?

In this comprehensive guide, you’ll learn how 3D printer resolution affects your 3D prints and how it differs between SLA, FDM, and DLP printers.

Resolution vs. Minimum Feature Size
Technology has been in a resolution war for decades. Televisions recently quadrupled pixel counts from HD to 4K and are poised to do it again soon to 8K. Cell phones, tablets, and anything with a screen will have its resolution as the lead on the spec sheet, provided that it’s something to boast about. But this is nothing new. Resolution wars have been waged since digital technology became popular, and the printing industry was one of the first battlegrounds.

If you were around in the 80’s and 90’s, you remember Canon, Brother, HP, Epson, and Lexmark (among others) battling it out for print speed and resolution. What started at 100×100 dots per inch (DPI) quickly escalated to 300×300, then 600×600, and finally the current industry standard of 1200×1200 DPI. Back then, the meaning of these values was clearly understandable; even the units made perfect sense. Unfortunately, things get more complicated when you add another dimension to printing. 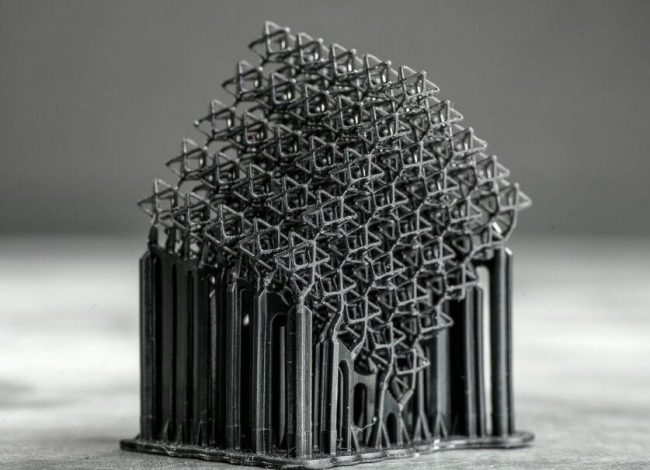 A print’s level of detail is impacted by the resolution in all three dimensions.

In 3D printing there are three dimensions to consider: the two planar 2D dimensions (X and Y) and the Z dimension that makes it 3D printing. Since the planar and Z dimensions are generally controlled via very different mechanisms, their resolutions are going to be different and need to be treated separately. As a result, there is a lot of confusion about what the term “resolution” means in 3D printing and what level of print quality to expect. What is the resolution of a 3D printer? There’s not a one-number answer. Since they print in 3 dimensions, you will have to consider at least two numbers: the minimum feature size of the XY plane and the Z-axis resolution (layer thickness). The Z-axis resolution is easily determined and therefore widely reported even though it is less related to print quality. The more important XY resolution (minimum feature size) is measured via microscopic imaging and is therefore not always found in spec sheets. Practically, it means that you should pick a printer that performs well in both categories like the Form 3 does.

SLA vs. FDM
A lot has changed since the first desktop 3D printers became available to the public. Now Stereolithography (SLA) 3D printers, like the Form 2 and the Form 3, are competing for the same desktop spots as FDM printers. One of the main advantages that SLA printers hold over their plastic-melting cousins is print quality: SLA 3D printers produce significantly smoother and more detailed prints. While SLA printers can usually also achieve significantly smaller layer thicknesses, the reason for the improved print quality lies in their much higher XY-resolution.

Unlike FDM printers, minimum feature size in the XY plane on SLA printers is not limited by melted plastic flow dynamics but rather optics and radical polymerization kinetics. While the math is complicated (and outside the scope of this post), it shakes out to this: features on SLA prints can be approximately as small as the diameter of their laser spots. And laser spots can be really small, especially compared to extruder nozzles.

Laser vs. DLP
Within SLA, there are two main types of imaging systems, laser-based SLA and DLP. Unlike DLP printers, which have a fixed matrix of pixels relative to the build area, laser-based devices can focus the laser beam on any XY coordinate. This means that laser-based machines, given high-quality optics, can more accurately reproduce the surface of a part even when the laser spot size is larger than the DLP pixel size. Whichever printer you choose, it should be able to capture the finest details of your creations, from stress test models to photorealistic busts of famous leaders. The right high-resolution 3D printer will bring your designs to life.

Understanding XY Resolution
In the world of 3D printing, no factor influences print quality more than XY resolution. Often discussed but seldom understood, XY resolution (also called horizontal resolution) is the smallest movement that a printer’s laser or extruder can make within a single layer. The lower the number, the better the details. Yet this number is not always included in spec sheets, and when it is, the published value is not always accurate. To truly know a printer’s XY resolution, it’s important to understand the science behind the number.

Practically, how does XY resolution affect your 3D prints? In order to find out, we decided to test the Form 2 SLA 3D printer. The Form 2 has a laser spot size of 140 microns (FWHM), which should allow it to print fine details on the XY plane. We put it to the test to see if this ideal resolution holds true.

To test the Form 2’s minimum feature size on the XY plane, we designed a model (left) with lines ranging from 10 to 200 microns and printed it in Clear Resin (right).

First, we designed and printed a model to test the minimum feature size on the XY plane. The model is a rectangular block with lines of varying widths in horizontal, vertical, and diagonal directions to avoid directional bias. The line widths range from 10 to 200 microns in 10 micron steps and are 200 microns tall, which equates to two layers when printed at 100-micron Z resolution. The model was printed in Clear Resin, washed twice in an IPA bath, and post-cured for 30 minutes. 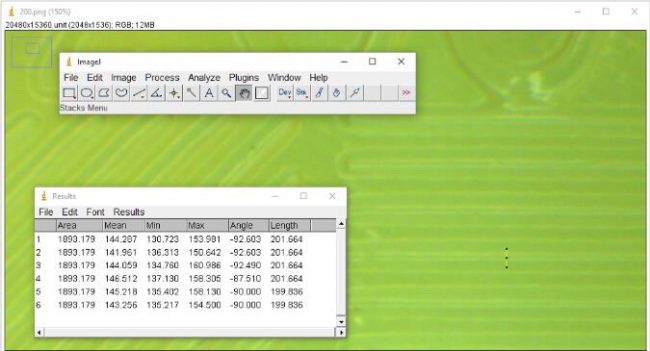 The model was photographed and tinted green to improve visibility. On the right side of the window, the vertical yellow line with black points measures the width of a photographed line.

After post-curing, we put the model under a microscope and took high-resolution photos for analysis. Using ImageJ, the NIH’s free image analysis software, we first scaled the pixels of the images and then measured the actual widths of the lines printed. We collected over 50 data points per line width to eliminate measuring errors and variability. In total, we printed and analyzed three models on two different printers. 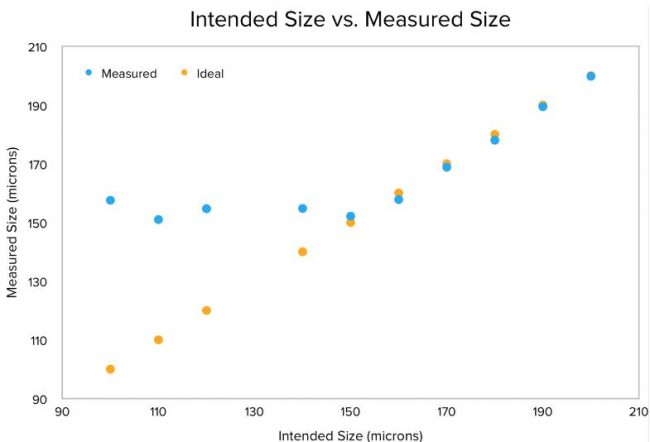 The results indicate that the Form 2 has the same ideal and actual XY resolution for features that are 150 microns and larger.

The Form 2’s minimum feature size on the XY plane is about 150 microns—only 10 microns larger than its 140-micron laser. The minimum feature size can never be smaller than the laser spot size, and there are many factors that affect this value: laser refraction, microscopic contaminants, resin chemistry, and much more. Considering the printer’s entire ecosystem, a 10-micron difference is nominal. Not every 3D printer’s published resolution holds true, so it’s a good idea to do plenty of research before choosing the one that’s right for your project.

If your work calls for prints with intricate details, look for a printer with an XY resolution that’s backed by measurable data, not just a number.

Understanding Z Resolution
When you read 3D printer spec sheets, you’ll see one value show up more than any else: Z resolution. Also known as layer thickness, Z resolution was the first major numerical differentiation between early 3D printers. Early machines struggled to break the 1 mm barrier, but now layer thicknesses on FDM printers can be sub-0.1 mm thin, while SLA machines are even more precise.

Currently, the Form 2 SLA 3D printer supports layer thicknesses of 100 and 50 microns in all resins. Clear, White, and Castable Resins can achieve Z resolutions as high as 25 microns. This selection of layer thicknesses gives you the ideal balance of speed and resolution. The main question is: what is the best layer thickness for your print?

Are Smaller Layer Thicknesses Always Better?
High resolution comes with a tradeoff. Thinner layers mean more repetitions, which in turn means longer times: printing at 25 microns vs. 100 usually increases the print time four-fold. More repetitions also mean more opportunities for something to go wrong. For example, even at a 99.99% success rate per layer, quadrupling the resolution lowers the chance of print success from 90% to 67% if one assumes that a failed layer causes total print failure.

Lower layer thickness equals more time, artifacts, and errors.
Do thinner layers result in better prints? Not always — it depends on the model to be printed and the printer’s XY resolution. In general, thinner layers equals more time, artifacts, and errors. In some cases, printing models at lower resolutions (i.e. thicker layers) can actually result in higher-quality prints.

When Thinner Layers Don’t Help
Thinner layers are typically associated with smoother transitions on diagonals, which leads many users to generalize and push Z resolution to the limits. But what if the model consists mostly of vertical and horizontal edges, with 90-degree angles and few diagonals? In those cases, additional layers don’t improve the quality of the model. 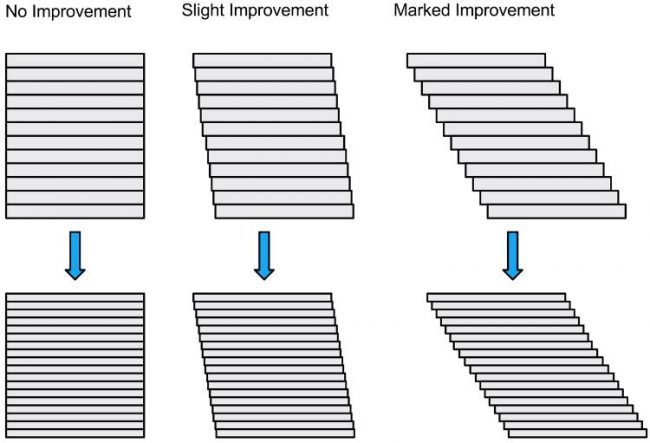 The issue is compounded if the XY resolution of the printer in question is not perfect and “colors outside the lines” when drawing the outside edges. More layers means more mismatched ridges on the surface. While the Z resolution is higher, the model will look like it is significantly lower quality in this case. When to Choose Higher Z Resolution
That being said, there are times when you want higher resolution. Given a printer with good XY resolution and a model with intricate features and many diagonal edges, dialing down the thickness of the layers will yield a much better model. In addition, if that model is short (200 or fewer layers) upping the Z-axis resolution can really improve the quality.

A tiny, intricate model with rounded arches calls for a higher Z resolution. This cathedral was printed on the Form 2 in 25 microns.

Certain designs benefit from a higher Z resolution: organic forms, rounded arches, small embossings, and intricate engravings. As a general guideline, err on the side of thicker layers and only bump up the Z resolution when completely necessary. With the right printer and a certain type of model, higher Z resolution will capture the intricate details of your design.

Grey Resin can now print at 160mm. See the speed and time difference for yourself.

In PreForm, we provide users with the choice of different layer thicknesses. As of PreForm 3.0.3, parts in Grey Resin can now be printed in the following layer heights: 160, 100, 50, and 25 microns. For engineers, printing in 160 microns will accelerate the iteration process, going from design to printed part in even less time. For dental professionals, it is now possible to produce more aligners in a day without compromising quality for your patients.