The floating movement in Chanel’s new Boy-Friend Skeleton Watch has reportedly been made using a 3D printing technology.

But what, exactly, is “chemical 3D printing?” 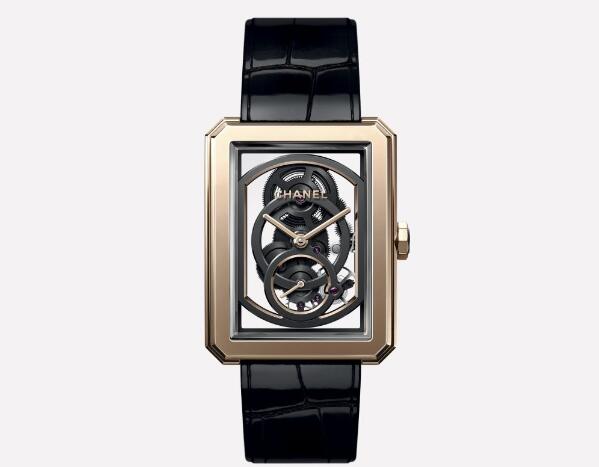 The chemical 3D printing referred to by Beau is actually a kind of electro forming technique related galvanizing, commonly used to strengthen metallic surfaces and protect them from environmental wear, e.g. corrosion/sun damage. Swiss luxury watchmaking Rado, calls its process of creating such items “galvanic growth,” and it uses it to achieve premium textures on watch faces.

The process takes place in an electrically charged immersion bath, containing metallic salts like copper, nickel and silver. When a plate of metal is submerged in the bath, the electrolytic charge attracts metallic particles from the salt to its surface. The particles gradually build up on the plate in layers, sometimes of multiple materials, to create a coat, which is then removed as a complete metal plate, or in Chanel’s case, movement wheels.

At Chanel, galvanizing was selected as the best method to create “plain” wheels, without the spokes that are usually needed to keep the wheels stable. When placed inside the Skeleton watch faces, the wheels appear to float in the glass case without screws.

Using galvanizing or “chemical 3D printing” to make movement wheels has been deemed as a first by Beau, as the process is so complicated.

As a taste-maker with global renown, Chanel is certainly no stranger to the latest technologies. In 2015, Chanel director Karl Lagerfeld appeared at Paris Fashion Week in a 3D printed suit. And, more recently, the company announced plans to mass-manufacture a 3D printed mascara brush.

Such innovation is in the nature of the brand or, to use a famous “Karlism”:

“What keeps couture alive, is to move with the times. If it stays like sleeping beauty in the woods in an ivory tower, you can forget it.”

If you’re seeking a new, exciting opportunity int he industry, sign up to 3D Printing Jobs here. For a limited time employers can also post 3D printing jobs for free.