INGLEWOOD, Calif. – As private space companies embrace 3D printing to save time and money building rockets, a quickly growing California startup is picking up launch contracts for its bold idea to print an entire rocket with additive manufacturing.

Former employees of SpaceX and Blue Origin, Relativity Space co-founders Tim Ellis and Jordan Noone helped their former employers begin to implement 3D printing on spacecraft and rockets. But in 2015, they struck out on their own to develop the world’s largest 3D printer to make printing larger rocket hardware possible.

“The start of the company was really wanting to see 3D printing expand to an entire rocket and there has been success of adopting 3D printing at the small scale but no one has pushed 3D printing to an entire product like a rocket,” Jordan Noone, the chief technology officer of Relativity Space told News 6 on a tour of the Inglewood, California company headquarters.

Less than five years later the startup of two is now a company of 92 and without a test flight they’ve signed at least three small satellite launch contracts for the fully 3D-printed Terran 1 rocket. 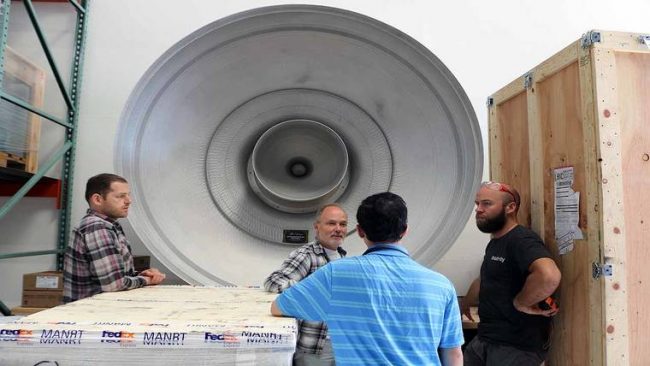 Relativity, like SpaceX and other companies, has Mars in it’s long-term business plan.

The company wants to take that concept off Earth and 3D print rockets on the red planet with Martian materials using artifical intelligence learning printers.

“You’re not going to have a team of metallists on Mars or on the moon waiting and ready to verify your quality and approve your printing process you want an autonomous intelligent system on the back end of the printer driving that quality,” Noone said. “Not only do we see that today with our machine learning on the back end of the printers, but that’s expected to continue as those printers get off planet as well.”

These same processes could be utilized not only for rocket hardware but habitats and other infrastructure, said Noone.

Relativity Space senior raw materials engineer Eliana Fu, who specializes in materials science and metallurgy, specifically titanium, said 3D printing on Mars will present new challenges to additive manufacturing because the red planet has a different gravity and atmosphere than on Earth.

On Earth, the company has plenty of materials for Terran 1 rockets. Terran means “of Earth” because it’s printed with aluminum and other metals that are found in large quantities on the planet. 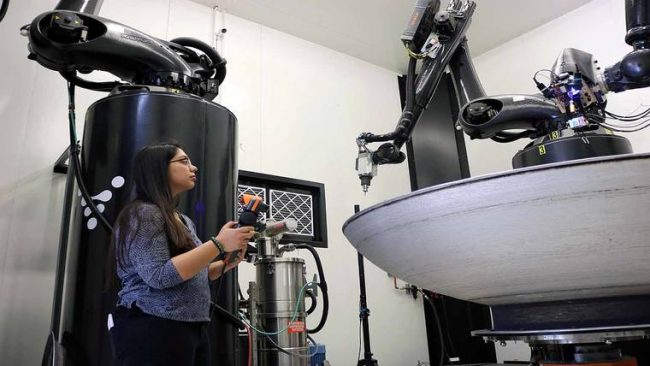 “3D printing is showing us the way we can develop new materials and better properties that have never been made before on Earth which is quite different than the traditional method of manufacturing that we’ve been using for thousands of years though human evolution,” Fu said.

The new space way of manufacturing, would reduce the number of parts on a rocket by the factor of 100. For example, the Aeon 1 engines that power Terran 1 can be built in house in nine days and printed in just three pieces, Noone said. 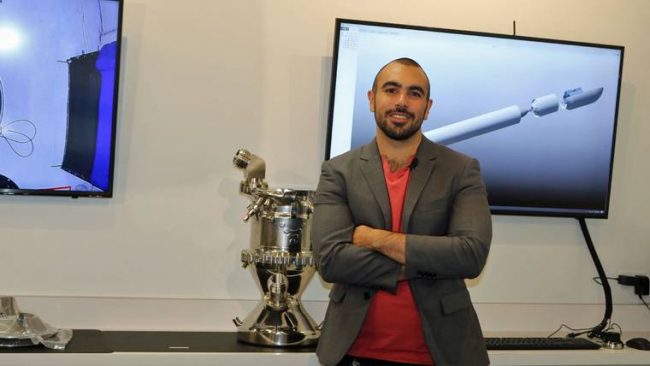 Relativity Space co-founder Jordan Noone next to a 3D printed Aeon rocket engine at the company’s headquarters on June 10, 2019. (Image: Emilee Speck/WKMG)

“The majority of printers on the market are about one cubic foot in size as far as what can come out of them,” Noone said, standing inside a small room that Stargate fills up. “This one is a small building.”

Earlier this summer, Relativity announced its opening of a 3D rocket manufacturing factory at NASA’s Stennis Space Center and plans to begin launching from Launch Complex 16 at Cape Canaveral Air Force Station by the end of 2019.

At the Stennis factory, the company plans to use a new version of the Stargate printer which is much smaller than the original and can be placed on a moving platform to print rocket parts as high as a building is tall.

“These are really the printers that will continue to scale with our company as the rockets continue to get bigger,” Noone said.

Former employees of successful private space companies also saw the benefit of additive manufacturing versus traditional rocket building and jumped on board.

“The reliability of actually moving to 3D printing will help humans in spaceflight because you’re removing the potential error of humans with having automation in the loop, which I think is a real value add to manned and unmanned spaceflight,” said David Giger, Relativity Space vice president of launch vehicle engineering.

Giger spent 13 years at SpaceX working on the Dragon spacecraft. After working with Noone at SpaceX and others who are now at Relativity, Giger said the vision of what the company founders want to do on Mars was what drew him in.

Giger said every launch he has played a role in is exciting but the initial Terran 1 launch from Cape Canaveral will be a first for him.

“I think the next one will be very near and dear to my heart in the sense that really being there from day one from the ground up helping build the team, helping build the company and really taking that next step in technology with additive manufacturing knowing that essentially, the entire rocket is 3D printed,” Giger said. “I think that will be a very compelling day and exciting day, for sure.”