Bastion Cycles Takes Ownership of Its Metal AM Capabilities

Bastion Cycles has developed a breakthrough additively manufactured (AM) bike frame described as “the riders holy grail”. The company transitioned from outsourcing their AM needs by investing in Renishaw’s AM250 system and gaining in-house production capabilities. Customers can configure and completely customise their bike frame directly through Bastion Cycles’ website and follow the production process online, from beginning to end.

The journey of Bastion Cycles began in mid-2014. Co-founders, Ben Schultz, James Woolcock and Dean McGeary decided to combine their two passions: engineering and cycling. The idea stemmed from a desire to build a premium bike frame locally in Australia which capitalised on the latest technologies and materials.

The founders recognised an opportunity to accomplish this using AM to produce titanium lugs together with carbon fibre tubing.

“Bastion was born from a very strong desire to express ourselves through our engineering skills and a product we were passionate about. Bastion really embodies everything we care about professionally. That is, utilising the latest technology and materials and designing, engineering, and manufacturing in our home, Australia,” explained Ben Schultz, Managing Director at Bastion Cycles.

Traditional methods of manufacture such as CNC machining or moulding do not allow for a lot of flexibility or customisation. In turn, many riders would have to compromise on the size of their bike frame. The adoption of AM opens the door for re-designing and re-engineering bike frames, optimising strength and functionality to allow customisation.

“The idea to use AM in a bike frame was not novel, but being able to make it strong enough, light enough, and aesthetically pleasing enough to sell at a price the market would accept took a lot of work and expertise,” commented Engineering Director, James Woolcock.

For the first three years of operation Bastion Cycles outsourced production. The capital investment required for an AM machine proved prohibitive for the start-up, so the company used an AM bureau. Pioneers in this sector, RAM3D located in Tauranga, New Zealand, began to manufacture the titanium components of the bike frames, to Bastion’s supplied design. RAM3D is the largest metal AM bureau in the Oceania region and utilise the Renishaw AM250 platform, with three machines in full-time production. With a wealth of experience and knowledge they supported Bastion Cycles in the development of printing skills and gaining experience in the discipline of design for additive manufacture (DfAM).

AM titanium bike frame build, produced on a Renishaw AM250

At the end of 2018, with a critical volume of bike sales reached, the decision was made to bring the AM process in-house. Four AM systems from various suppliers were used to trial samples. Renishaw’s AM250 system produced the best surface finish and material performance, together with mass-customisation capabilities and little-to-no inventory required, equating to huge benefits for a small business starting out on their AM journey.

Co-founders Ben, James and Dean worked closely with Mike Brown and Gary London from Renishaw Oceania, based nearby in Mulgrave, Australia and in late 2018 invested in a Renishaw AM system.

Bastion’s 3 year journey to in-house AM has been one of discovery; the trio had no experience in designing end-use production parts using AM before, they had simply used it for prototypes to confirm clearances and functionality.

“Our first metal prototype was designed the way we knew how, still trying to gain stiffness with internal ribs and gussets. The real breakthrough began when we started exploring just what is possible with this technology and started to retrain our mindset. Our subsequent prototype was a big step forward and featured a structural lattice and many other improvements only possible with AM,” explained Technical Director, Dean McGeary.

This frame was bench tested and passed all the ISO impact tests consecutively, using one frame, on the first attempt. Bastion then proceeded to build four more prototypes for testing, on the bench and on the road, to find any weak points. The advantage of AM and the modular design created, meant they were able to quickly re-design prototypes in-house by only adding material where it was needed.

Once the prototype frames had reached a satisfactory performance, the next iteration was to build five beta trial production frames. The beta production frames passed all ISO fatigue tests consecutively and continue to be in use today.

“Additive manufacturing is the secret to the customisation and performance of our bikes and a real differentiator. Other brands produce lugged titanium with carbon fibre tubing frames, but they all manufacture the lugs by welding tubes together. We are able to manipulate the shape of our lugs and add a super lightweight lattice to the inside of them, which means we can achieve exceptionally high lateral and torsional stiffness, similar to what you find in a carbon fibre monocoque frame and at a similar weight,” commented James Woolcock.

When the time came to study in-house AM production in earnest, the Bastion team were supported by their local Renishaw Oceania’s Product Manager, Gary London, to run trial builds using Bastion’s data. Over three months, several successful builds were completed that allowed Bastion to show equivalence to their existing process and provide a platform for a smooth transition to in-house production.

“The trial build and on-boarding process supported by Renishaw Oceania, gave us the confidence to move ahead without a large disruption to production,” added James Woolcock.

Bastion’s decision to choose Renishaw to supply their AM system, at a critical juncture in the growth of the company, had also been influenced by the level of serviceability of the system and the support available from Renishaw.

“Australia is a new and, I would say, fairly small AM market. There are not many machines spread across a large geographical area compared to North America or Europe. Renishaw is the only AM company that has committed to have a local headquarters with dedicated staff and a full suite of spare parts,” remarks Ben Schultz.

“A service engineer can reach us within only one to two hours. Our machine has been running seven days per week since we installed it, with only one minor issue. Renishaw Service and Support Engineer, Jean-Paul Amoordon, was on site within 2 hours of us raising the call and the machine was running again within four hours. For a small business like us, that is priceless,” explains James Woolcock.

AM technology offers new possibilities which cannot be achieved through traditional bike manufacture methods. The capability to vary the geometry for every single bike frame allows complete customisation for every customer. AM also provides the ability to produce extremely thin walls that can vary from 0.25 to 1.5 mm.

The internal lattice structure and the aesthetic styling character lines that add beauty and elegance, all contribute to the creation of Bastion’s breakthrough bike frame design. 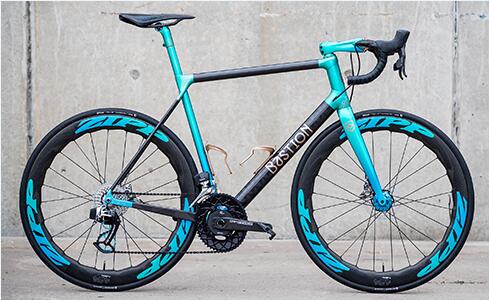 Using Bastion Cycles’ online bespoke design tool, customers can design and modify their bike and follow the production process from beginning to end, assured in the knowledge that their custom-built bike will last a lifetime. Bastion Cycles can produce a frame within four weeks, but due to demand they currently have a six-month waiting list. Each customer is supplied with a fully customised engineering report and a world leading crash and repair policy, offering impressive value over the bike’s lifetime.

Bastion Cycles also operates ‘Bastion Advanced Engineering & Design’, specialising in design for additive manufacturing (DfAM) and bespoke engineering solutions. This arm of the business has also been bolstered by the ability to produce titanium AM parts in-house and is already producing components for five other bike builders globally. Additionally, Bastion Cycles is producing custom high performance parts to be used by the Australian Olympic track cycling team.