During the Aircraft Interiors Expo (AIX) show in Hamburg this April, the company premiered a true-to-life 3D-printed interior aircraft cabin on the booth, demonstrating the various parts of the aircraft where 3D printing is being used by customers such as Airbus, Boeing, GKN Aerospace, Etihad Airways and others. 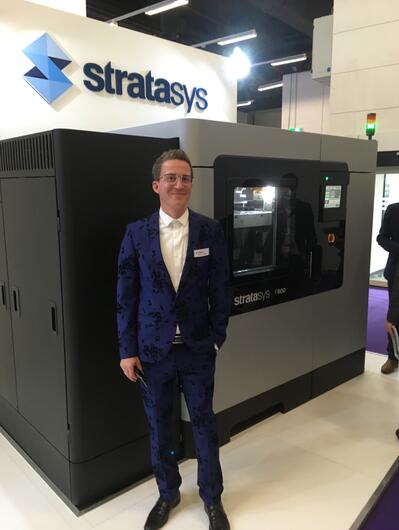 Big advances in parts quality and certified materials are enabling these companies to reduce aircraft weight and cost while speeding up production, making it cost-effective to customize aircraft cabins, according to Stratasys.

In Hamburg, Stratasys gave AIX visitors – including PAX Tech – a demonstration of the 3D-printed cabin, detailing the real-life use cases where the technology is being deployed in the aircraft.

For example, Airbus flies thousands of fully-certified, 3D-printed parts on its planes across the world, while China Eastern Airlines is 3D printing customized iPad holders for its pilots.

Recently, China Eastern Airlines’ first brand-new 777 passenger aircraft had misprinted seat signs. The cost for purchasing replacements was too expensive for such a small error, so engineers used 3D printing. The new signs were ready in three days at a much lower cost, so China Eastern Airlines set up a dedicated Additive Manufacturing Lab to explore more applications for 3D printing.

Eastern Airlines Technic, which is responsible for China Eastern Airlines’ aircraft maintenance and part repair, set up the lab with a Fortus 450mc and ULTEM 9085 resin, a high-performance thermoplastic material with high strength-to-weight ratio compliant to relevant FAA and CAAC25 requirements.

Since its inception, the lab has produced and installed more than 300 finished parts, making China Eastern Airlines the first domestic airline to have 3D-printed interior parts in commercial planes. By 3D printing small batches, the company cuts lead times and cost of purchasing spare parts, while still ensuring safe, comfortable flights for passengers.

“In the past, if any cabin parts were broken, we had to buy new ones from designated suppliers, which could take up to three months. Sometimes there were no available parts at all,” said Chen Zhiyi, Additive Manufacturing Lab R&D engineer. The long lead times meant broken parts couldn’t be fixed quickly, which downgraded passengers’ flying experiences. “That’s why we use 3D printing, it solves this problem in an efficient and innovative way,” said Zhiyi.

The Additive Manufacturing Lab has enabled Eastern Airlines Technic to transform its business from proposal submission to part design to production.

The Additive Manufacturing Lab has transformed into an advanced manufacturing department with expanding capabilities.

“China Eastern Airlines plans to introduce the new Airbus 350 equipped with over 1,000 3D-printed flying parts. As a complementary method to the traditional manufacturing, 3D printing will become more widely adopted in the future. It’s critical to gain the expertise and be well-prepared for future challenges,” said Zhiyi.