Researchers at ETH Zürich, Switzerland, have developed a novel 3D printing method capable of manufacturing multi-metal microstructures with a resolution of 250 nanometers at 10 voxels per second.

According to the study published in Nature Communications, ink-based metal additive manufacturing processes have several limitations in producing metallic structures. Alain Reiser, a Ph.D. student and first author of the study, explained:

“Those techniques require a post-printing treatment that involves heating, which results in a shrinking and pronounced porosity of the material. Typically, this means that the metallic structures are less conductive, mechanically unstable and, moreover, often contaminated with the organic compounds of the liquid solvent.”

Ralph Spolenak, professor at the Laboratory for Nanometallurgy of the Department of Materials, led the development of EHD-RP to advance metal 3D printing on a microscopic scale. According to the researchers, this could lead to the production of extremely thin connecting wires for semiconductors.

Contrarily, liquid metal 3D printing involves the dissolving of nanoparticle inks for microfabrication. The team sought a more direct method where the metals are not deposited as a nanoparticle, but transported by electrically charged metal ion droplets.

The ions are created with an electric voltage to a sacrificial anode (a highly active metal) inside a printing nozzle. Following this, the ions are sprayed by electric forces inside a solvent onto a printing surface, losing its electric charge. Using EHD-RP, metals can be quickly built to be both dense and thin.

“By printing directly with metal ions, without the detour via an ink, we can even print two metals simultaneously or in alternation,” added Reiser. “This allows us to produce metal structures with locally controllable chemical, electrical or mechanical properties.” 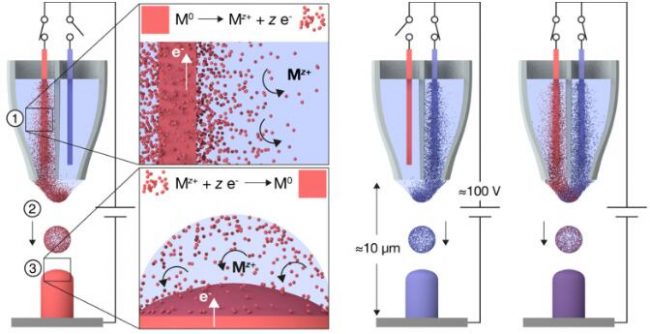 Working principle of 3D printing with metal ions. By applying appropriate voltages one can print, for instance, copper (left), silver (center) or both metals at the same time (right). Image via ETH Zürich.

The research states, “Sacrificial anodes as precursors for metal ions are well established for solution-based synthesis and electrospraying of metal ions and particles. EHD-RP differs from these experiments by enabling highly localized electrochemical growth of dense materials as well as the continuous modulation of the deposited chemistry.”

In the future, the ETH Zürich team plans to extend the range of metals used in EHD-RP to include magnetic materials. This will work towards the production of photosensors, 3D printed integrated circuits and mechanical metamaterials. Presently, copper, silver, and gold have been tested. 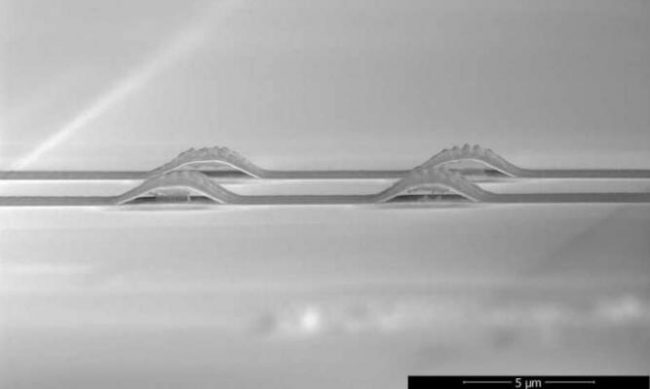 3D printed silver stripes with arched bridges made using EHD-RP. A support structure made of copper, which was subsequently etched away was used in the creation of these objects. Image via ETH Zürich.