WE Solutions and Divergent will Produce over 10,000 3D Printing Vehicles a Year in Shanghai

Hong Kong-listed WE Solutions, an electric vehicle (EV) investor, teamed up with Shanghai Alliance Investment, the private equity arm of the Chinese city’s government, to build the plant, which will make over 10,000 vehicles a year, WE said in a recent media briefing.

“The EV market in China is at an inflection point, with unparalleled growth in demand and government policy stimulus,” said Eric Ho King-fung, chairman of WE Solutions.

“It will only be a matter of time before policies come out stating that old vehicles have to be abolished. As a result we have to get ready, not only for the EV industry but for the world’s largest automobile industry. That’s why we’re entering the market,” he said.

WE Solutions is the latest company to get into the EV market in China, where buyers have shown a big appetite for such vehicles since 2014 due to a government push to phase out fossil fuel vehicles and promote environmentally friendly alternatives.

The country, the world’s largest car market, accounted for more than half of global EV sales last year and is expected to take up 53 per cent of the global electric vehicle market in 2025. By then, total worldwide sales of EVs are expected to surge to 13.5 million cars, according to data from the Chinese National Energy Commission and research firm IHS Markit. In comparison, only 724,000 electric vehicles were sold in 2017.

WE Solutions said production would start once crash tests on the vehicles are done, which should be in the next 12-18 months. 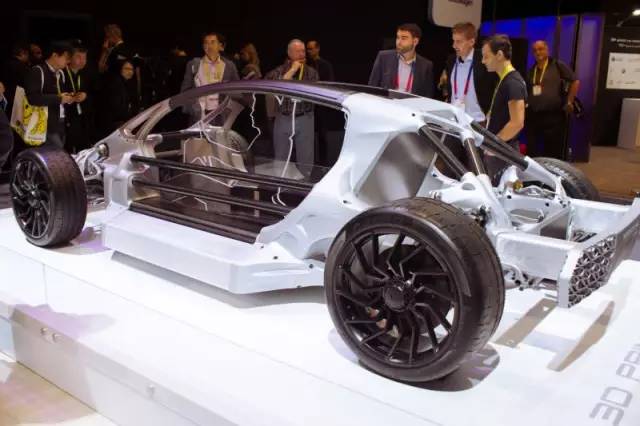 The technology for the new plant will be provided by US 3D-printed car start-up Divergent 3D, in which WE Solutions has a 27 per cent stake.

“This would be the first large-scale factory to start building in Asia vehicles and vehicle structures based on 3D printing,” said Kevin Czinger, CEO of Divergent, at the briefing. “The plan is to have some reference parts of the factory operating in the second half of 2019,” he said.

He added that Divergent aims to license its technology to other carmakers across China and Asia.
“These factories are relatively low-cost and modular, so the idea is that it’s a reference factory, a showcase factory to demonstrate the technology,” he said.

WE Solutions was formerly known as O Luxe Holdings, a luxury jewellery distributor. It rebranded itself as an EV solutions provider last year, and Li Ka-shing was among its investors, buying shares worth HK$140.4 million (US$17.9 million) through a company called Ocean Dynasty Investments Ltd.

Its aim is to bring together in one platform various EV technologies, from vehicle design and assembly to autonomous driving, in-car entertainment technology and charging. It recently completed a round of investments into EV firms in several of these areas.