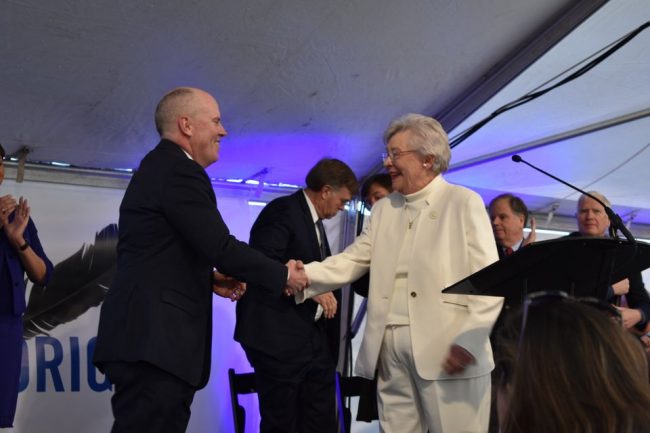 CEO Bob Smith excited the groundbreaking audience by also announcing an agreement with NASA’s Marshall Space Flight Center in Huntsville to refurbish and reopen test stand 4670 on the center to test the new engines made in Alabama. The stand that once tested the Saturn V’s first stage and the space shuttle’s main engines will return to large-engine testing for the first time since the shuttle program ended.

The plant will open on 46 acres in Cummings Research Park in 2020 creating somewhere between 300 and 400 new jobs, company leaders said. It will build the company’s two main engines – a version of the BE-3 and the new BE-4 – on a “highly automated” assembly line featuring robots and additive manufacturing (3-D printing).

“The engine has a lot of additive parts,” Smith told AL.com in an interview. “It has some very unique cladding and different ways we produce that engine. One of the things that’s not always obvious is that we at Blue Origin are a ‘make’ house. We’re not an integrator. We literally make everything that we have. We don’t have a lot of ‘build to spec.’ All of our things are ‘build to print.’ Everything that you’ll see that’s on that engine is actually going to be built from effectively bar stock or powder that we put into that facility.”

The plant’s early customers will be the growing Blue Origin company itself and United Launch Alliance (ULA), a partnership of Boeing and Lockheed Martin that builds rockets to launch government and commercial satellites in nearby Decatur, Ala.

“We’re going to be producing dozens of engines a year,” Smith said. “The vast majority of (the jobs) will be manufacturing engineering, manufacturing techs. We’ll also have an engineering group, as well, that will be supporting those engine tests that we’ll have at (test stand) 4670.”

Smith said the new plant will also use manufacturing techniques from the automotive industry. “We make things that go high and fast,” he said, “but manufacturing? That’s not the best thing the aerospace industry does. So our benchmarks are much more automotive, where they get single-digit-type of parts-per-million quality. We’re bringing those standards as well.”

“Alabama’s a great place to do business,” ULA CEO Tory Bruno said in the same interview. “Wonderfully talented workforce and terrific leadership that is as passionate about space as we are. They create an environment where we can focus on our work and we can thrive as a business and have access to the talent we need.”

Smith said he has opened manufacturing plants around the world at other times in his career and ranks Alabama among the best in terms for competitiveness, workforce and business climate. ‘It is truly world class in terms of what Alabama does to attract aerospace jobs into this area,’ Smith said.

America is “leaning into a new set of challenges in national security space,” Bruno said. “The requirements are steeper going forward, and you have to cope with the challenges we’re going to face in a contested environment.”

Vulcan will have 30 percent more lift capability in a single rocket and a lower launch cost than the company’s Delta IV heavy, which Bruno called “a majestic, 30-story high, three rockets bolted together (booster) that launches payloads to the most difficult orbits.”

But Bruno said the industry is on the threshold of a new space race. “We will be tapping into resources that we know exist in our local neighborhood between here and the moon that really defy human imagination in terms of their abundance – moving to a post-scarcity environment,” he said.

Bruno said “the good news” is that the Trump administration appreciates both the commercial and security potential of space. “We are sort of responding to the challenges,” he said.

Space has been “uncontested,” Bruno said. “That’s not going to be the case going forward. Space will be contested. We will have to have the capabilities to make sure it remains peaceful and it remains available to us.”

“When we announced that Blue Origin had chosen Huntsville, Ala, as the new home for this engine production plant, we stood under the Saturn V rocket,” Ivey said of the 2017 announcement press conference the U.S. Space & Rocket Center. “Folks, think about that. It was here … that we built the rocket that took man to the moon … and now it’s going to be Alabama that takes men and women into deep space and returns them safely.”