This Is The Most Complex Generative Design Ever Made

Autodesk worked with NASA to create a space lander prototype that can withstand the temperatures and pressures of outer space. 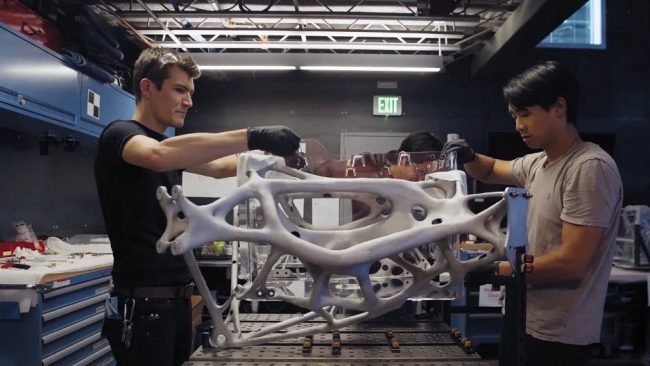 It’s one challenge to design intricate mechanical equipment for Earth. It’s another thing entirely to shoot it into space.

That’s why Autodesk’s new concept for a space lander, designed for NASA’s Jet Propulsion Laboratory, is the most complex piece of generative design–ever.

Generative design is a process where the human designer inputs all the boundaries and restrictions for a physical design into a computer program, then an algorithm crunches the numbers and comes up with concepts that fit the bill. In the case of the space lander, there were more constraints than any other project attempted thus far, according to Autodesk. “Just the sheer number of calculations the machine needed to make based on all these conditions is larger than anything that’s been done,” says Mark Davis, senior director of industry research at Autodesk.

The engineering software company has previously partnered with NASA. Autodesk uses information from partnerships such as this one to gauge where to take the company’s commercial products in the future. As for NASA, the agency often explores different concepts when it begins big new projects and welcomes input from other organizations and companies.

Space landers are especially important to NASA now, since they are crucial for investigating whether there are traces of life on other planets. These are the mechanisms that allow a rover like Curiosity, which NASA deployed to Mars in 2012, to safely land on the planet and begin exploring. Now, NASA has now set its sights on reaching the moons of Saturn and Jupiter, an even greater technical feat because they’re so much farther away. For NASA, the lighter a space lander, the better, because that means the agency’s scientists can cram more scientific instruments on board.

A LITANY OF CONSTRAINTS

The idea for the NASA-Autodesk lander was to create the lightest structure possible. But it still had to withstand the pressure of being launched into space, freezing temperatures, radiation levels 1,000 times that of Earth, and the gravity and lateral force when the structure lands on a planet (like Mars).

Autodesk’s generative design algorithms then assessed different materials, like aluminum and titanium, and manufacturing processes, to get a sense for the ideal structure. Davis says the algorithm looked for an optimal solution that could accommodate 13 different payload boxes–the structures that will hold the precious scientific experiments–across six different environments and three types of manufacturing.

The final prototype, which is made of aluminum and aluminum alloy, looks almost like a spider, with spindly legs and an airy chassis that resembles a web. “[NASA’s researchers] don’t care what it looks like, just that they reduce the mass and make sure the structure is very safe, so there’s no chance of failure,” Davis says.

Will NASA’s next rover look like this? Probably not–the space industry tends to move slowly and new ideas must be tested rigorously to ensure they hold up in the harsh conditions outside our atmosphere. But the design shows that algorithms are becoming better at designing vastly complex structures. And one day, their work might even launch into space.