Longtime collaborators ExOne and Abbott Furnace are now partnering together on the use of continuous furnaces for sintering of aluminum and high-volume binder jet applications.

When ExOne announced in March that it had begun successfully binder jet printing and sintering 6061 aluminum — delivering high densities of 99%, traditional material properties, and tight geometric control — it was a breakthrough decades in the making. 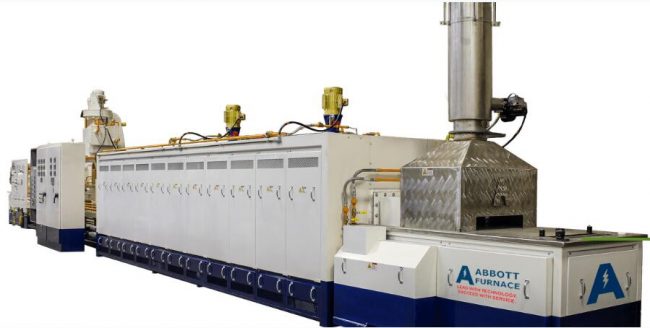 While most binder jet 3D printers sold today are paired with a batch sintering furnace, ExOne found with Abbott’s assistance that Al 6061 preferred a continuous furnace — the very type that would be advantageous in high-volume production.

“The use of a continuous furnace turned out to be a key element of our patent-pending approach,” said Rick Lucas, ExOne Chief Technology Officer and VP, New Markets. “In our roadmap, 6061 aluminum was always the peak. It’s the most commonly used aluminum in the world; it’s what manufacturers want. But it’s also the most challenging to print and sinter. A lot of great minds came together to make this happen, building on decades of foundational work.”

So, while both PM and BJT could bind aluminum particles into a precision “green” form, neither had found a reliable way to sinter these forms to high densities while retaining shape and properties.

When Feldbauer looked at a micrograph of ExOne’s recent work on the printing and sintering of Al 6061 with other furnace approaches, he saw enough progress had been made by ExOne to deliver what others had struggled to for so many years. “Steve was very positive this would work,” Lucas recalled. “It’s largely about the gas flow over the part.”

Like a forensic scientist, Feldbauer, who also teaches powder metal processing at Penn State, saw the micrograph and could tell exactly what challenges were occurring and had a good idea of how to fix them. “I teach sintering in applied materials. I teach powder metal processing,” he explained. “I was able to draw on my experience.”

Abbott’s continuous furnaces, such as the Vulcan Delube System, specializes in removing binders or lubricants from PM and binder jet parts efficiently and “cleaning” the parts through several chambers of tightly controlled atmospheres and thermal profiles.

“Aluminum wants to oxidize so easily,” Feldbauer explained. “We’re printing and sintering it and controlling that. That ability to control atmosphere in sintering is really what sets Abbott apart worldwide. To process continuously and to have very tight control of the atmosphere.”

“We are way ahead of anyone else in the world in printing and sintering to the quality we’re producing,” Feldbauer explained. “What makes this process exceptionally challenging is that we’re trying to achieve such a high density and not distort the product.” Feldbauer likened it to trying to keep a metal particle from melting during sintering into a rounded droplet and, instead, keeping it square like a volumetric pixel — while, at the same time, removing binders and preventing oxidation.

He said the developments around the recent AL 6061 achievement will transform manufacturing in important ways, delivering more lightweight geometries in aluminum that are important to the automotive, aerospace and other industries.

“One of the things that this project really highlights is the importance of binder jet printing and sintering as a process in additive.

“For many, many years, binder jet hasn’t been viewed as favorably as electron beam or laser but what we’re demonstrating here is we can print a material with equivalent quality that cannot be made by welding with a laser or EBAM. Not only can we make it, we can do it in high volume. Without the ability to maintain high quality and high volume in sintering, this market was forced to be a niche market.