EHLA Tuning: Roller Coating at up to 200 Meters per Minute

The Fraunhofer Institute for Laser Technology ILT’s globally successful EHLA extreme high-speed laser material deposition process is not only turning heads. In the collaborative project EVEREST, the institute – along with three industrial partners – has developed process and system technology to efficiently repair and coat components and tested it on rollers. Now after successfully completing the project, the Aachen researchers want to establish the newly developed process chain in the industry. The goal is to coat long and large rollers and other rotating components with the EHLA process in a near-net-shape, both reliably and extremely efficiently. 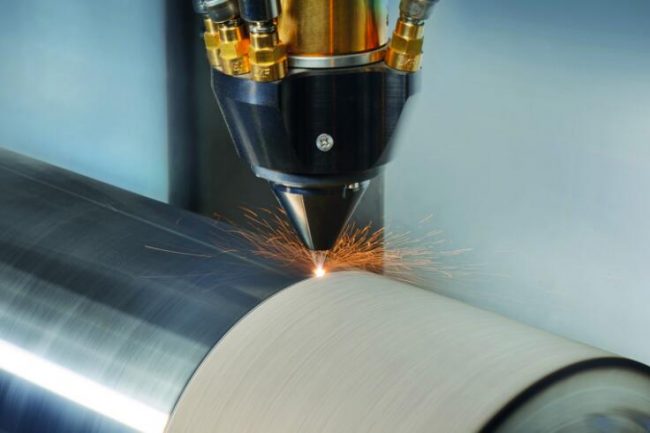 In order to be able to repair and coat components more efficiently, the process chain was tested on a heating roller, coated with corrosion-resistant iron-based powder. © Fraunhofer ILT, Aachen, Germany.

Revolutionary technical developments require patience: This is also true of EHLA. Almost a decade ago, researchers at Fraunhofer ILT started to develop extreme high-speed laser material deposition, which increased the previous process from a maximum of two to several hundred meters per minute. But it was the further development and testing in collaborative projects that led to long-term success.

A current example is the collaborative project EVEREST: Together with the industrial partners LUNOVU GmbH from Herzogenrath, BCT GmbH from Dortmund and Drink & Schlössers GmbH & Co. KG from Krefeld, Germany, the Fraunhofer ILT scientists have developed process parameters and strategies for coating and repair as well as for hybrid manufacturing of sealing surfaces. This process was successfully tested in practice. For example, a heating roller (length: 1,200 mm, diameter: 200 mm) was coated with corrosion-resistant powders based on iron, nickel and cobalt. The coating thicknesses in the project ranged from 50 to 300 µm – at process speeds of 20 to 200 m/min.

The system technology – developed by BCT and Fraunhofer ILT for geometry acquisition and process monitoring as well as for adaptive tool path planning – played a very important role in the project. To accomplish this task, the partners used a specially developed CAM module that corrects geometric deviations from the target state in a semi-automated manner. But it wasn’t just a matter of closing the control loop. “We took a camera-based approach that allows us to follow the coating process from a bird’s eye view, so to speak, and thus draw conclusions about the stability of the process,” explains Gregor Bultel, a scientist at Fraunhofer ILT. “The system technology has proved very successful in the project, and we are now looking for the first users for it.”

The practical tests were conducted in Herzogenrath at the project consortium leader LUNOVU, which also supervised the EHLA demonstration system. This manufacturer of laser systems integrated the entire process chain into the demonstrator in order to integrate the complete workflow from scanning, path planning and automatic generation of the NC program into the automatic repair process. “The biggest problem was to combine all the subsystems involved into one process chain,” says LUNOVO application developer Andreas Bartling, in retrospect. “We mastered the challenge: The result was a reliable process chain that not only saves resources, but also has very efficient system technology requiring very few employees to look after it.”

In the project, those involved also analyzed the need for further action. For Bultel, the upcoming work packages include optimizing the powder materials, depositing complex geometries, increasing the final contour proximity, and developing new process strategies for crack-free deposition of very hard coatings. But the topic of the process chain also goes further for him: “I’m thinking about linking process chains: We could also combine the coating process with post-processing steps – perhaps even in one and the same machine.”

The roll manufacturer Drink & Schlössers took over the practical testing. “With the process and the system technology used, the component surfaces could be processed well,” summarizes Managing Director Kurt Beckers. “We were able to produce the surfaces exactly as we had imagined.” The managing director was already familiar with powder-based laser material deposition, so he was also very interested in the significantly faster version. After the satisfactory pilot project, Beckers sees good opportunities for EHLA: He hopes that the process technology is developed even further, which will also allow very large, long rollers with a diameter of up to 3,000 mm to be reliably coated close to the final contour. 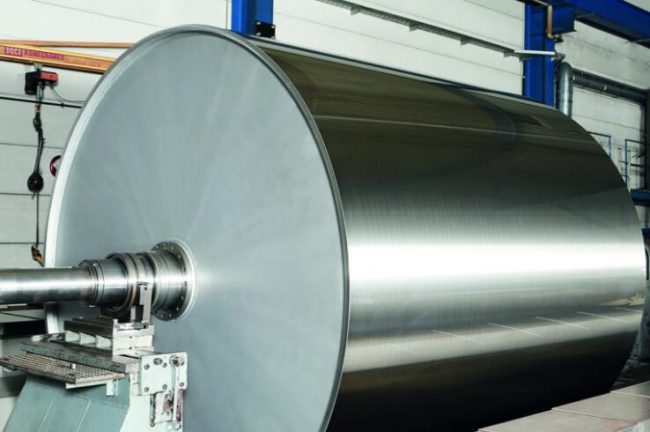 In the future, suitable system technology will also allow very large, long rollers with a diameter of up to 3,000 mm to be reliably coated close to the final contour.© Drink & Schlössers.