Future lunar landers might come equipped with 3D printed rocket engine parts that help bring down overall manufacturing costs and reduce production time. NASA is investing in advanced manufacturing – one of five industries of the future – to make it possible.

Through a series of hot-fire tests in November, NASA demonstrated that two additively manufactured engine components – a copper alloy combustion chamber and nozzle made of a high-strength hydrogen resistant alloy – could withstand the same extreme combustion environments that traditionally manufactured metal structures experience in flight. 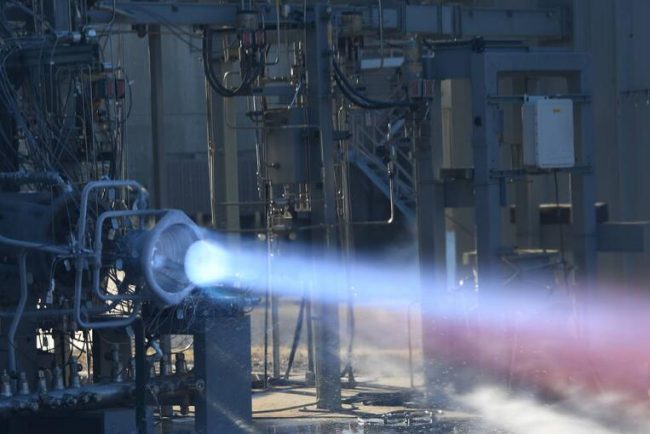 Hot-fire testing of an additively manufactured copper alloy combustion chamber and a nozzle made of a high-strength hydrogen resistant alloy. Credits: NASA

“This 3D printed technology is a game-changer when it comes to reducing total hardware manufacturing time and cost,” said Tom Teasley, a test engineer at NASA’s Marshall Space Flight Center in Huntsville, Alabama. “These hot-fire tests are a critical step in preparing this hardware for use in future Moon and Mars missions.”

Teasley worked with a team of Marshall test engineers to put the 3D printed parts through their paces. They performed 23 hot-fire tests for a total duration of 280 seconds over 10 test days. Throughout the testing, engineers collected data, including pressure and temperature measurements in hardware coolant channels and the main chamber, and high-speed and high-resolution video of the exhaust plume and chamber throat. The team also calculated the chamber’s performance and how efficiently the engine used propellant overall.

The tests were a part of NASA’s Long-Life Additive Manufacturing Assembly (LLAMA) project, which aims to enable these 3D printed parts – along with other additively manufactured hardware – for use on future lunar landers. The team will perform additional hot-fire tests to further demonstrate and validate the durability of the engine components. Marshall leads the LLAMA project for NASA’s Game Changing Development program, part of the agency’s Space Technology Mission Directorate.