Researchers of the Universities of Stuttgart and Adelaide in cooperation with medical research centers in Australia developed a special microoptical tool with a thickness of only 125 microns. This enables endoscopic examimations within blood vessels whose diameter is smaller than 0.5 mm and helps detecting plaques or thrombs to reduce the danger of a stroke or a heart attack.

Endoscopy allows to examine the body with tubular instruments. Examples include colonoscopy of the intestines or gastroscopy of the stomach. However, such endoscopes are often still as thick as a finger. They are not suited to enter small blood vessels. Glass fiber technology is a promising technique to inspect to such fine veins, because the fibers are just 125 µm in diameter. The main technological issue is the extremely small optics on the tip of the fiber: it should look sideways to deflect a laser beam from inside the fiber to the inside vessel wall, detect its shape and depth composition, and send its reflection back into the fiber. This way a doctor can get an image from inside the body.

The examination uses a technology called optical coherence tomography (OCT), which one might know from eye and retina examinations. It uses a laser beam whose spectrum of colors is relatively broad that penetrates the tissue. The analysis of the reflected light allows for exact depth mapping of the tissue, similarly to ultrasound, but with much higher spatial resolution. 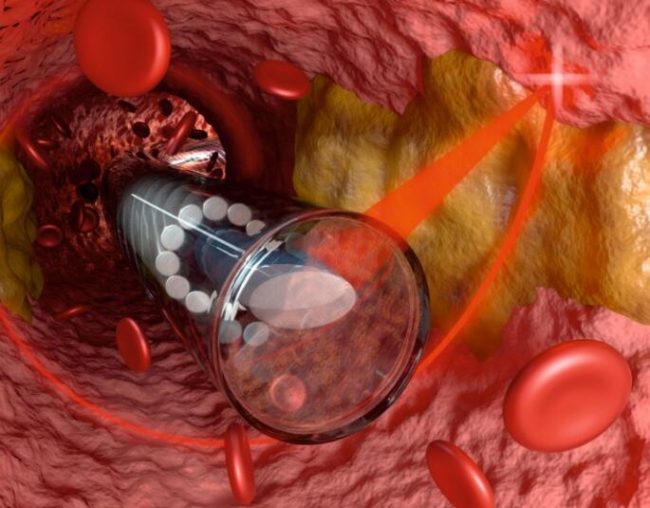 Dr. Simon Thiele from the group of Prof. Alois Herkommer at the Institute of Technical Optics at University of Stuttgart teamed up with 3D printing experts of the group of Prof. Harald Giessen in Stuttgart and developed together with fiber OCT experts Dr. Jiawen Li and Prof. Robert McLaughlin from University of Adelaide the smallest endoscope of the world, with an outer diameter including the sheath of less than 0.5 mm. Together with colleagues from Royal Adelaide Hospital, SAHMRI Institute in Adelaide and Monash Cardiovascular Research Center in Melbourne, they used the 3D printed microoptical OCT endoscope to examine the inside of blood vessels of mice and humans. The doctors obtained highly accurate 3-dimensional images of the veins, which were later compared with histological stained images.

The 3D-printed endoscope, consisting of a transparent glass fibre, a guiding tube for fiber rotation (black) and a transparent sheath for protection, has an overall diameter of less than 0.5 mm.
Photo: Universität Stuttgart/ PI 4

Plaques and cholesterol crystals can be detected early

The 3D printed microoptics focused to laser beam from the fiber to a fine spot, correcting also for the aberrations in the cylindrical plastic sheath. The OCT system was able to detect plaques as well as cholesterol crystals in human carotid arteries as well as in aortas of obese mice. These causes for vascular deseases could be well detected by the fiber endoscope, which rotated like a spiral inside the blood vessels. Comparisons with stained microscope images of the sliced tissue confirmed the early detection by OCT.

Dr. Simon Thiele, who designed the miniature optics, believes that the new system could add significantly to the already 400 000 performed OCT endoscopic examinations. Millions more could be performed inside blood veins and detect early plaques and cholesterol crystals. He believes that one might be able to dissolve such plaques in the future with a suited laser beam using such a miniature endoscope, which can easily enter such small vessels.

From technology demonstration to market

Simon Thiele is about to spin out the 3D printed micro-optical technology into a commercial enterprise called “Printoptics GmbH”. The company Nanoscribe GmbH from Karlsruhe, which was spun off from KIT about 11 years ago and who employs now over 70 people, supplied the ultraprecise 3D laser printer. Carl Zeiss AG from Oberkochen in Germany, who is a key player in the world market of medical technology, took already a stake in Nanoscribe. Support for this research in Germany came from the Ministry of Research, the Baden-Württemberg-Foundation, and from DAAD.